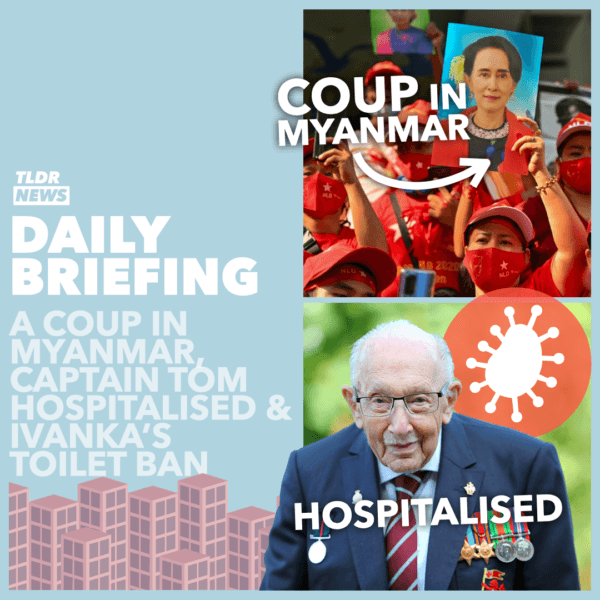 A Coup in Myanmar

In the first story today, we go to Myanmar to discuss the military coup that has successfully taken control of the country. Early this morning, Myanmar’s military detained the leader of the government (Aung San Suu Kyi), alongside members of her governing party (the National League for Democracy). A one year state of emergency was then called.

The military claims that the election last year was fraudulent, and that the government therefore has no legitimacy. The military managed to take the state broadcaster off air, install road-blocks on roads leading to the capital city, close banks and disrupt communication services.

The head of the military is now in charge. Prior to being arrested, Aung San Suu Kyi wrote a letter to supporters – urging them to protest the coup and ensure that they don’t accept it.

This has been a particularly shocking move from the military today – as they were promising, all the way until Saturday, that they would respect the constitution. The military was in charge of Myanmar until 2011, when this new constitution was signed. Their actions today demonstrate that for the first time since 1962, the government has been toppled by a coup. It’s likely that this decision came about due to the fact that this week, the parliament was scheduled to sit for the first time since the election – and were set to ratify it. As the military backs the opposition party, it appears clear why they’re not particularly keen on the incumbent government.

It should be noted, also, that the electoral commission have denied any evidence of electoral fraud in last year’s election. Nonetheless, the military have confirmed that they plan to schedule another election – how they will ensure the public votes for the party of their choosing, is as yet unknown.

In the second story today, we move to the US to discuss a slightly more frivolous story. A story about Ivanka Trump banning the secret service from using her toilets. Yep, that’s right, the secret service who were assigned to ensure that she was kept safe were not allowed to use the toilets in her flat – supposedly on her (or her partner, Jared Kushner’s) orders. We should probably note here, that this story comes from an investigative report from The Washington Post and is disputed by a White House spokesperson.

Nonetheless, it has been suggested that the secret service had quite a job finding a replacement for the 6 toilets in the Washington mansion. In order to relieve themselves, agents were supposedly forced to ask neighbors to use their toilets. This included the then Vice-President Mike Pence and former President Barack Obama. Just imagine that for a second – a secret service agent stood on the doorstep of former President Obama with their legs crossed hoping to use his loo – and remember, this isn’t the plot to some third-rate political comedy. This, according to The Washington Post, actually happened. What a world we’re currently living in.

Even more crazily, it has been suggested that an apartment had to be rented with the express purpose of allowing the secret service agents to relieve themselves – at the cost of $3,000 a month to the taxpayer.

In the last story today, we move to the UK to discuss the saddening news that Captain Sir Tom Moore has tested positive for coronavirus. For those of you who don’t know, Sir Tom has become a household name in Britain following his fundraising campaign last year that saw him walk 100 laps of his garden in time for his 100th birthday to raise money for the NHS. He ended up raising over £32m.

He has had a particularly interesting life, attaining the title of ‘Captain’ during the Second World War. Since his fundraising efforts, he has been knighted by the Queen.

Unfortunately, a few weeks ago, he got pneumonia. Due to fears that it could interfere with his medicine, he was not administered with the coronavirus vaccine. Last week, he tested positive for coronavirus and yesterday he was admitted to hospital.Many notable figures have wished him well, including Prime Minister Boris Johnson and Leader of the Opposition Keir Starmer. Although we’re not quite as noteworthy as either of them, we’d also like to send our best wishes to Sir Tom.