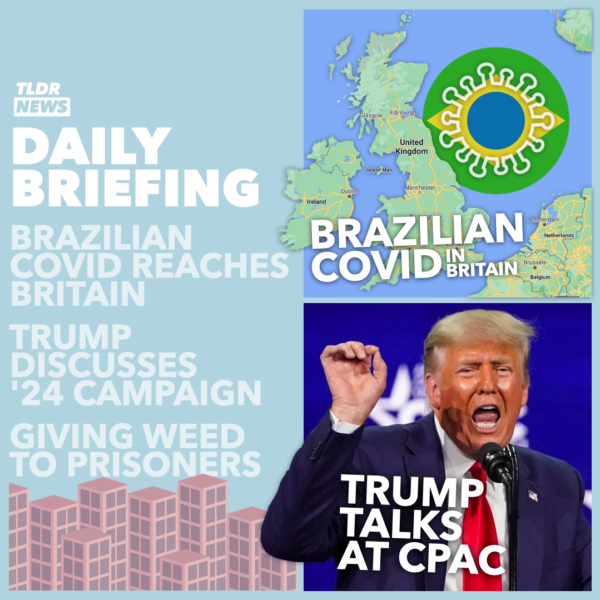 In the first story of the briefing today, we stay in the UK to discuss the search for one of the spreaders of the Brazil variant of coronavirus in the UK. While the race has well and truly been on to get as many doses of the vaccine in British arms as possible, the last thing anyone wants is a setback. Currently, the Kent variant is the dominant variant of coronavirus in the UK. This led to a higher infection rate and has been responsible for the third wave the UK is currently experiencing. Luckily, the Kent variant doesn’t appear to be any less receptive to the vaccine, which means that the swift vaccine will likely bring cases and deaths right down.

However, it doesn’t appear that we’re quite as lucky with the Brazil variant. It has more of a resistance to the vaccines, meaning that if it were to become the dominant strain, the vaccine rollout would be markedly less successful in reducing cases and deaths. So, it’s imperative that it is contained.

Currently, six people known to have had the Brazilian variant are in the UK. One of these, though, did not fill in the registration form – meaning that although they tested positive for the variant, authorities have not been able to contact them to let them know. All we know is that the person took the test of the 12th or 13th of February – which has prompted the government to urge anyone who took the test on these dates, and who has not received a result, to come forward.

The concern is that this individual could be spreading the virus, potentially unknowingly, to others. This could lead to the Brazilian variant becoming more widespread in the UK population, in turn, reducing the effectiveness of the vaccine rollout.

Let’s all hope this variant can be contained.

For the second story today, we move to the US to discuss the possibility of a Trump 2024 presidential campaign. It’s been over a month now since President Trump left office – and with many of his social media accounts blocked, he has remained relatively quiet. There have been no tweets, no speeches and no controversies. Perhaps after 4 years in one of the most powerful positions in the world, he has simply been taking a break.

However, this weekend, his break appears to have come to an end, with the former President making a speech at the Conservative Political Action Conference (CPAC). In this speech, he stated that “I may even decide to beat them for a third time” – heavily implying that he may run again in 2024 as well as continuing the unsubstantiated claim that he won in 2020.

While some may, quite sensibly, question whether this means he’d run as a Republican or start a new party – Mr. Trump quite comprehensively cleared this up by stating “we’re not starting any new parties”. He made clear that he believed that in starting a new party he’d be splitting the Republican vote, something he doesn’t want to do.

This speech could be viewed as Mr Trump’s entrance back into the political arena, which many would support with recent polling showing 55% of Republicans would choose Trump to be their nominee. Not everyones’ on board though because while his policies had 95% support with CPAC attendees, only 68% wanted him to run again, let alone become the nominee.

In the last story of the Daily Briefing today, we move back to the UK to discuss giving cannabis to prisoners. Yep, you heard us right. This was the idea floated by a police boss in the UK – which he claims would reduce violence and tackle addiction.

This idea came from Arfon Jones, who is currently stepping down as the North Wales Police and Crime Commissioner. It likely comes on the back of a finding from a report by Swansea University’s Global Drug Policy Observatory, which demonstrated that 13% of men had developed an addiction to illicit drugs since being put in prison. Additionally, 52% stated that it was easy to procure such drugs in prison.

Obviously, not everyone agreed that allowing cannabis in prison was the answer though. The Conservative Crime Commissioner candidate stated that there were “other ways” to treat those with an addiction.

Regardless, it is a rather bold proposition, and one that we’d like to know your opinions on in the comments below.