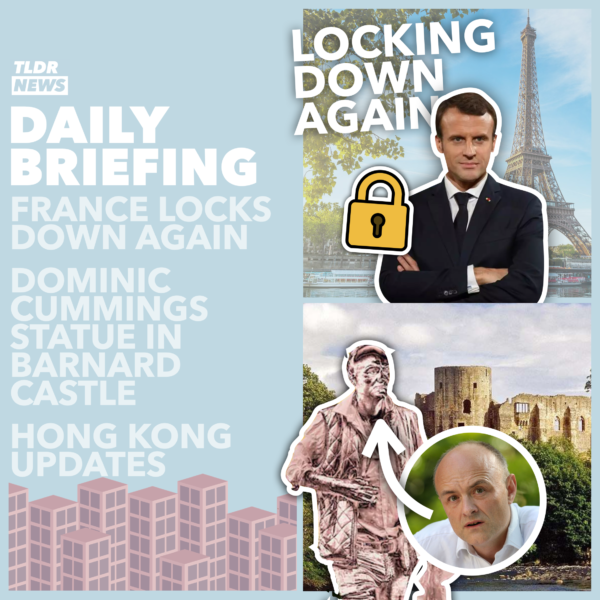 In the first story of the Daily Briefing today, we move to France to discuss the next French lockdown. Europe is currently undergoing a surge in coronavirus cases – largely driven by the Kent variant. This was something that the UK wrestled with over winter, and what caused the government to backtrack on the established plans for social contact at Christmas. After months of lockdown, the UK is now starting to unlock – albeit, tentatively.

Europe, though, has only just started to experience this wave. The unfortunate reality is that the solution to this wave appears to be another lockdown. For French President Emmanuel Macron – who, like British Prime Minister Boris Johnson in December – has been determined to avoid another lockdown has today reluctantly plunged his country into another one.

In a TV address to the nation, President Macron admitted that if he didn’t lock down now, then the country would ‘lose control’ of the virus.

As part of the lockdown, all non-essential retail must close, any travel between regions is banned (without legitimate excuse), and all citizens must remain within 10km of their house (again, unless they have a reasonable excuse).

Let’s just hope the French lockdown works, and that cases, and deaths, are brought down as quickly as possible.

In the second story today, we move to Hong Kong to discuss further developments in the ongoing story about China’s attempts to undermine democracy. While we’ve recently discussed the news surrounding the restrictions being placed on legislators in Hong Kong (and that they need to be loyal to China), we’ve not really discussed much about press freedoms – and the outcome of cases brought against journalists by the state.

As we’ve probably made clear so far, that’s what we’re going to discuss today. Last year, a number of influential figures in Hong Kong were arrested due to their participation in protests. One of the biggest figures arrested was former legislator Martin Lee, and media tycoon Jimmy Lai. The latter is facing charges not only of taking part in an unauthorised rally, but also national security charges.

Seven defendants, including the two we’ve mentioned have been found guilty of this charge of ‘taking part in an unauthorised rally’ – although, sentencing will take place at a later date. The maximum penalty for the offence is five years, although it is unlikely that the maximum will be imposed.

As we’ve stated in other Daily Briefings this week, this news comes amid China trying to undermine the freedoms granted to Hong Kong under its agreement with the UK. The international community are speaking up about the many supposed violations of the agreement – but exactly how they will go about stopping them (or potentially, if they go about stopping them) is yet to be seen.

In the third story today, we move to England to discuss Dominic Cummings. The first question some of you will be asking about now is why? After all, Mr. Cummings is no longer at the forefront of politics – having resigned his position as the Prime Minister’s advisor after a falling out. Well, to answer that, we need to explain the Barnard Castle scandal.

Many of you will know about this, but for international viewers, it’s probably best to explain. Back in early April 2020 – the UK was just adjusting to the ‘new normal’. Lockdown had just been implemented, and very little leeway was given to all of us locked down. Social contact was effectively limited to being through a screen, and travel was only allowed for essential purposes.

The Prime Minister’s advisor at the time, Dominic Cummings, realised that his wife may have the virus. According to him, he became worried that he too may be infected with the virus – and that the couple would be too weak to look after their four year-old child. So, the decision was made to travel from London to Durham to stay in a house on the land of Dominic’s parents. If they were too weak to look after their child, then the family could look after him.

Before returning to London, Cummings took a trip to Barnard Castle – supposedly to test his eyesight while driving before taking the over 400 mile trip back to London.

The reason this became a scandal was due to the fact that Cummings was a close advisor to the Prime Minister, and his actions were perceived by the public as flouting the rules. Many were angry that they were following the rules scrupulously, while those in positions of power were apparently flouting them. He defended himself by stating that “there is no regulation covering the situation I found myself in” – but many still saw the trip to Barnard Castle as unnecessary.

Why are we bringing this year old story up again today though? Well, as it turns out, when the lockdown eased last year many people travelled to Barnard Castle due to its infamy following the scandal.

Seemingly trying to capitalise on the situation, a planning application has now been made by a member of the local historic society to create a 5ft11 statue of Mr. Cummings near Barnard Castle. It is likely hoped that such a statue would increase local tourism even further – when such activities are allowed again.

As much as the historic society likely wants the statue to be made, it is so far looking unlikely, with the local by-laws stating that statues can only depict someone who is deceased and have made an exceptional contribution to the international reputation of Barnard Castle.

To be fair though, it’s hard to argue that Mr. Cummings didn’t do the latter.

In the last story today, we look at some of the best April Fools day stories that have been circulating on the internet today. Because after all, who doesn’t love people being fooled on the internet (low key, we had to double check the Cummings story wasn’t an April fools, and we’re still not even 100%).

Let’s start with the announcement by South Australia Police that sausage dogs would be joining their squad:

Another good one is by Lipton, who have promised to make “self-jiggling” tea bags. Although, for a tea company, it is odd to see them promoting such a bad cup of tea:

And, in the most vile announcement of the day, Subway have announced their new “corriander cookie” – which looks about as bad as it sounds:

In more UK-centric April Fools news, Ant and Dec have announced that after 30 years, they are changing the format of their show to be called Dec and Ant – something that absolutely wouldn’t confuse anyone.

Anyway, what do you think of these April Fools’? Are they funny or just cringey?

For those of you who think the news is too long, be sure to check out Tuesday’s Daily Briefing.