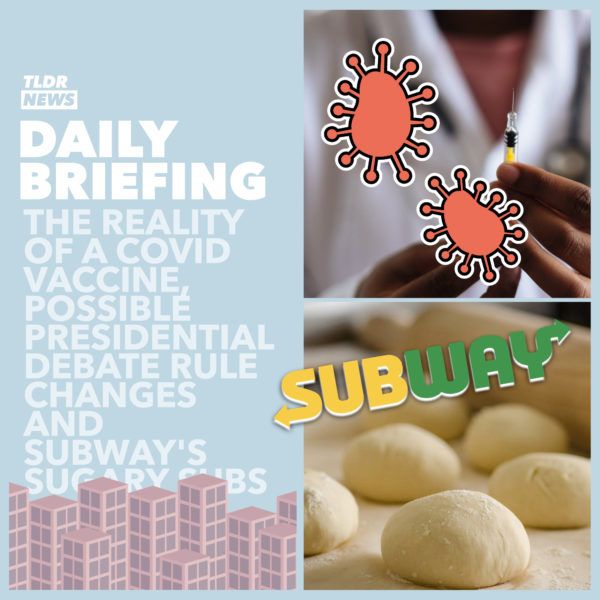 October 1st: The Reality of a Vaccine, Presidential Debate Rules and Sugary Subs

The Reality of a Vaccine

The first story in the Briefing today relates to a stark warning from scientists. Although many of us are waiting for the purported ticket out of the pandemic that is a coronavirus vaccine, we might just be setting the bar a bit too high.

Although a vaccine is likely to be completed, the likelihood that it will put us back to ‘normal’ by Spring is seemingly unlikely. A report from researchers at the Royal Society have claimed that the path to a successful vaccine is long – and rolling it out to a population takes time.

Professor Nilay Shah, head of chemical engineering at Imperial College London has claimed that the rolling out stage of a vaccine takes time, and will not simply be completed in a month. This stage could take six to twelve months.

So, assuming that everything goes perfectly and we have a working vaccine by the end of the year, it could take up to the end of next year to have the vaccine rolled out across the UK.This isn’t to say we don’t have things to look forward to, though, just that we all need to be a bit more patient…

In US news today, it has been announced, following the presidential debate this week, that the rules will be made more strict for both candidates going forward. Both candidates were particularly rowdy, with interruptions and insults a common feature of the event.

As a response to this, the nonpartisan commission that regulates the debates has decided to be more strict in the upcoming debates about interruptions from candidates – possibly even turning off the microphone of the candidate as a punishment.

We will see exactly how this will work in the next presidential debate!

In Irish news today, Subway has been told by their supreme court that they cannot legally consider their subs to be ‘bread’, because they contain too much sugar.

The reason this case went to the Supreme Court was because of the VAT the franchise were paying for the subs. The company claimed it should not have to pay any VAT on them, as it is a type of bread, which is not subject to the tax.

However, following the court’s decision (based on the high sugar content), the subs will be charged VAT at a rate of 13.5%.