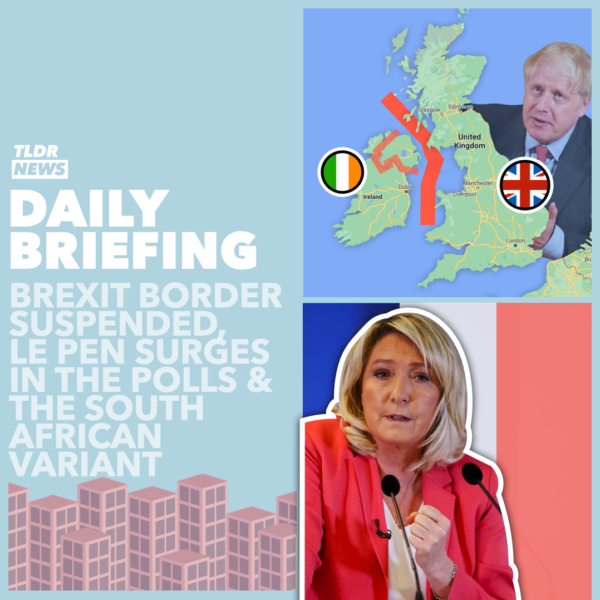 In yesterday’s episode of the Daily Briefing, we discussed the hospitalisation of Captain Sir Tom Moore. Unfortunately, Sir Tom has died in hospital – dying with coronavirus. Sir Tom will forever be remembered for the effort and enthusiasm he put into raising £32m for the NHS during the first lockdown. Our thoughts go out to his family and friends at this incredibly difficult time.

Before we get going with the Daily Briefing today, a quick shout out to our new series on the TLDR Global channel. Every week we’ll be running you through some of the biggest news events of the last 7 days and giving you the information and extra reading you need to stay in the loop. There’s a link to this week’s video in the description but if you want to make sure you never miss an episode subscribe to the Global channel, that’s also linked here.

In the first story today, we go to France to discuss a figure you might not have heard of since the Presidential election of 2017: Marine LePen. Well, it seems like she will be standing again in next years’ Presidential election – and, if a poll from last week is anything to go by, she could do a lot better than anyone is expecting.

In the said poll, LePen was put at 48% support in the second round to President Macron’s 52%. Although Macron was ahead, it was clearly not by much – and with another 15 months to go before the election, and with the coronavirus still very much ongoing, it is possible that she could rise further yet in the polls. France has one of the highest rates for coronavirus in the world – which could be behind the recent rise in the polls for Ms. Le-Pen. Polling has further shown that anti-EU sentiment has increased from 44% to 49% – possibly another explanation for LePen’s rise in the polls.

It should also be noted that President Macron has overseen the gilet-jaunes (or, yellow vest) protest, which began due to anger over increasing fuel prices.

Having said all this, it should be noted that this is a one-off poll – and Marine LePen isn’t even actually ahead of Mr. Macron. 15 months is a lifetime in politics, especially at the moment with the uncertainty of the pandemic. While this is certainly interesting and something to be noted, we shouldn’t look too much into it and assume, like some newspapers are doing, that Ms. LePen will be the next President of France based on this one poll.

In the second story today, we move to Northern Ireland to discuss checks on food and animal products. It has been reported today that checks on certain animal and food products have had to be suspended today due to threats against the members of staff conducting said checks.

In order to protect the Good Friday Agreement, Northern Ireland has remained within the EUs single market and customs union. This means that checks, instead, happen when certain goods are moving across the Irish sea. While some are happy with this some (more hard-line) pro-British unionists are frustrated as it means that Northern Ireland has left the EU on slightly different terms to the rest of the UK.

The regions’ agricultural minister, Edwin Poots, announced the move – but did not suggest whether shipments would still move through the port in the absence of checks. Clearly tensions are running high about the arrangement Northern Ireland has with the EU and the UK. We’ll need to see exactly how this tension is resolved going forward.

In the last story today, we stay in the UK to discuss how the South-African coronavirus variant is being contained. Now if you’re not familiar with the South African Variant or the different variants of COVID more generally you’ll want to check out the TLDR UK video we put out on it last week, that’s linked in the description.

Anyway the first, and arguably most significant, measure being used by the UK to try to stop this variant spreading across the country is something known as ‘surge testing’. Effectively, the government is urging those that live near someone who has tested positive for this variant to accept the offer of a coronavirus test. The government is offering everyone over the age of 16 these surge tests – hoping that they can identify all known cases and instruct them to self-isolate. In total, more than 80,000 people have been given the opportunity to take part in the surge testing.

This demonstrates the Health and Social Care Minister Matt Hancock’s promise to “come down hard” on the South African virus variant. In fact, if this testing is successful, then the South African variant could be eradicated in the UK within two weeks – according to the director for public health in Hertfordshire, Jim McManus.

Let’s all hope that this, alongside the government’s virus rollout, is successful!