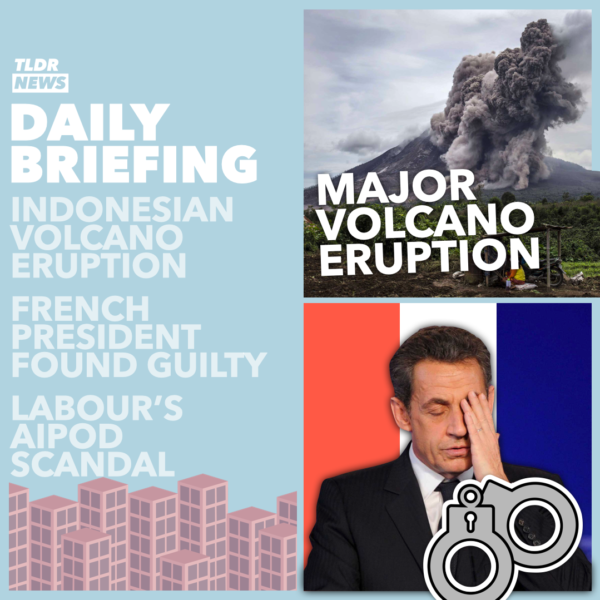 March 02: A Volcanic Explosion, A Jailed President, and an Expenses Scandal

In the first story today, we turn to Indonesia to discuss a huge volcanic eruption. While the world is still learning to cope with coronavirus and it’s new mutations, little press focus is being paid to natural phenomena such as volcanoes. This is why we’re including it up front in the Briefing today, as we thought it might be something a bit different, and definitely something worth reading about.

On Tuesday Morning, Mount Sinabung erupted with ash being propelled 5km into the sky. Local agencies recorded 13 “bursts” of the volcano. There are no known deaths, likely due to the fact that since it erupted in 2010 (following it being dormant for centuries) all of those living nearby have evacuated.

This has also aided authorities to implement a 5km no-go zone around the volcano, as there is no one to evacuate. Let’s hope this has been effective in keeping those who live in the surrounding areas safe.

For the second story today, we move to France to discuss a story that we probably should have already covered – the jail sentence given to former President Sarcozy. The former French president has been handed a three year sentence (with two of the years suspended) for trying to bribe a judge in 2014. Specifically, he was found to have offered a judge a job in return for information about a case.

Despite the conviction, Mr. Sarcozy’s lawyers have indicated that he may appeal the conviction – which will likely last many years, during which, Mr Sarcozy will remain a free person.

This is an absolute first for France. No former president has been handed a custodial sentence since leaving office. While former President Chirac got a two year suspended sentence for giving jobs to allies as the Parisian Mayor – his sentence did not include a custodial element.

As we mentioned, this is likely not the end of this story. With an appeal very much still on the cards, the sentence could be overturned. Nothing is clear yet, though, and it is definitely something that needs to be followed. We’ll include any updates in further installments of the Daily Briefing.

In the last story of the Daily Briefing today, we move back to the UK to discuss a recent expenses scandal. Since the pandemic began, many of us have been working from home. While this may have saved some of us money in commuting costs, costs to improve the home-office have likely increased, alongside increases in electricity/heating costs and internet costs. This is why some workplaces have allowed individuals to claim for such costs, so that workers don’t end up out of pocket.

MPs are, at the end of the day, still people – and are usually afforded similar perks as other workers. In this case, they have been given an extra £10,000 that can be used to cover the additional costs of working from home.

However, some MPs have come under fire for how they’ve used their expenses. In total, MPs have spent £40,000 on Apple products since the beginning of the pandemic. Some have included Apple AirPods on their expenses – prompting questions as to whether this aids them in work as MPs.

Labour’s deputy leader Angela Reyner has been found to have spent £249 on what The Sun has claimed are “personalised” AirPods, whereas Health and Social Care Secretary Matt Hancock has also been seen to have expensed the £158.99 model.

It should be pointed out here that no-one is claiming that they have broken the rules. Even one of the main critics of these MPs,  John O’Connell, chief executive of the TaxPayers’ Alliance, has said “”No doubt all of this spending will be shown to be ‘within the rules’”.

A spokesperson for Ms. Reyner has stated that “all expenses for the running of Angela’s parliamentary office were submitted in line with the rules”.

While we have been able to confirm that Ms. Reyner spent £249 on a(n) Apple product(s), we have not been able to see exactly what this was. Mr. Hancock, however, was shown to have spent £158.99 on AirPods.