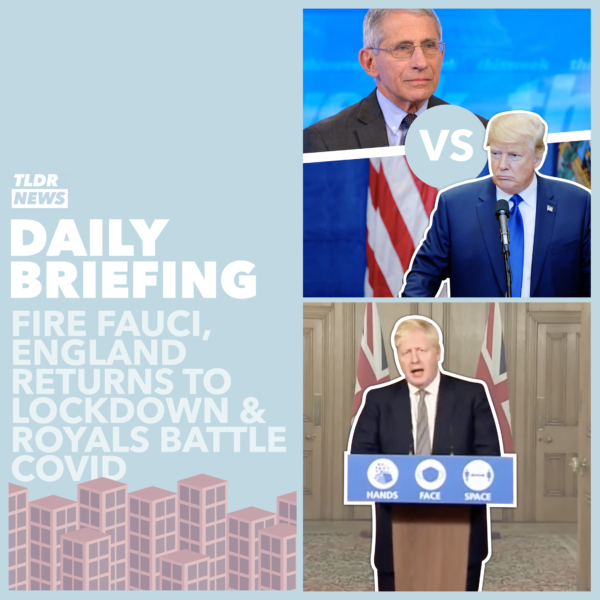 Trump Gets Grouchy Over Fauci

In the first story in today’s Daily Briefing, we go over to the US to look at a fairly fraught relationship between the president and Anthony Fauci. Although the two have worked closely on the response to the crisis, Trump’s objectives and Fauci’s objectives can often be at odds. Fauci is a medical expert, and is focussed solely on the public health crisis that coronavirus has caused. The President needs to take more factors into account, such as the economy, knock-on health effects (such as a reduction of capacity in hospitals etc).

This has led some of Trump’s supporters to back the sacking of Fauci. Although Trump has alluded to the tension between himself and Fauci in the past, it has never really been that public, nor has it commanded much of the news cycle. Today, though, this changed.

During a campaign rally, the crowd started chanting “Fire Fauci”, to which the president replied “don’t tell anybody but let me wait until a little bit after the election”. This was a seemingly clear suggestion that provided he is re-elected, Trump would swiftly remove Fauci from his advisory role in the administration.

To be fair though, over the weekend, Fauci did make clear his views on the Trump administration through his claim that Biden “is taking it [the virus] seriously from a public health perspective”, whereas Trump is “looking at it from a different perspective”. This may have been the cause of Trump’s outburst. However, this is just speculation.

In English news today, it was announced after a notoriously late Downing Street briefing on Saturday that England will go back into a national March-style lockdown from this Thursday. This means that the ‘stay at home’ advice will once again be used by ministers – urging the public to only leave the house for ‘essential’ purposes. The week-to-week essential reasons to leave the house include seeing members of your support bubble, exercising and going to the supermarket.

It should be noted that the government has made clear that they will not tell supermarkets to close parts of their shops deemed to be non-essential (such as clothing aisles). This is what is currently happening in the Welsh ‘firebreak’ lockdown – which has been met with fierce public backlash.

There are, additionally, some reasons why the government can reasonably claim that this lockdown differs from the one implemented in March. Firstly, there is no limit on exercise. Secondly, people can meet up with one other person when exercising outdoors or visiting a public outdoor place. Thirdly, support bubbles will be able to socialise indoors. For those of you watching from outside the UK, a single adult household can form a ‘bubble’ with another household – meaning they can all interact as if they all live together. This had not been implemented until restrictions started easing in the summer.

So, while no-one is looking forward to giving up the limited amount of social interaction we were granted in the summer – at least this lockdown won’t be as restrictive as the last one! Try to stay positive people!

If you want to hear more about England’s lockdown, and if locking down really is the right strategy then check out our new podcast Politics Unpacked. In the show we briefly explain the situation before debating the pros and cons of lockdown, and weirdly a harebrained idea to lock old people in Cornwall.

For our final story of the Daily Briefing today, we stay in the UK to report on the battle between the Royal Family and coronavirus. Although it was widely reported in March that the next in line for the throne, Prince Charles, contracted the coronavirus, nothing was said of whether his son William (second in line to the throne) had caught it.

Recently, The Sun reported that Prince William had caught coronavirus in April – and deliberately kept it quiet in an attempt not to worry anyone.

Despite this story being potentially huge if verified, Kensington Palace (the home of Prince William) has refused to comment.