Home Daily Briefing December 02: An Attack in Germany, Paying for Presidential Pardons and the COVID Vaccines Approved in the UK 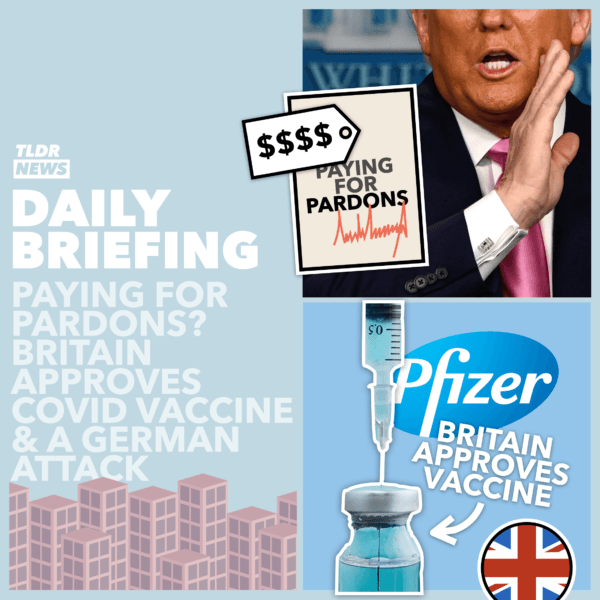 December 02: An Attack in Germany, Paying for Presidential Pardons and the COVID Vaccines Approved in the UK

An Attack in Germany

In the first story in the Daily Briefing today, we talk about the sad news of an attack in Trier, Germany. As we’ve said before when reporting news of such tragic events, we understand that the Daily Briefing can sometimes be lighthearted – and we have questioned whether we should include such stories. But, again as we’ve said before, we feel like it is only right for us to report this story – deliberately avoiding it seems wrong.

Last night, in Germany, it was reported that a drunk driver had driven his car through a crowd of people. Tragically, it was reported that 5 people lost their lives – sadly including that of a baby. While it is currently unclear whether the driver had a motive, it has been revealed that he has a history of mental illness and was, at the time homeless (he was living in his car). The police currently suggest that there was no political or religious motive to the attack.

The driver’s car was rammed into by the police in order to stop its continued use in the attack. The driver himself refused arrest, but was overpowered. He is now in police custody, although he is refusing to answer questions.

Our thoughts are with the victims, and the family and friends of the victims of the attack.

In the second story today, we talk about the President of the US, Donald Trump. Specifically, we discuss the power that he has to pardon people, either for crimes they have been convicted of or crimes that they are yet to be convicted of. While this is a power given to all presidents – and one that has been used by presidents before, this has become quite a controversial power with the current president. This is because he has been reported to have looked into the possibility of pardoning himself and his adult children. While it has not yet been confirmed that he is legitimately looking to do this, the mere fact that he is looking into has startled some.

In addition to that, it has today been reported that the US Justice Department has opened an investigation into a “secret lobbying scheme” which could include White House officials. The claim is that this scheme tried to bribe officials in order to obtain presidential pardons.

While very little is known about the exact nature of the investigation, including the names of those being investigated, the President has already hit back. He put out a very straight and to the point (and, frankly, very Trumpean) Tweet:

The COVID Vaccine Approved in the UK

In the last story today, we move to the UK to discuss the news that the Pfizer vaccine has been approved by the regulator for us here in the UK. Although it was developed in the US, the UK regulator has approved it before the US regulator. This is likely down to a difference in the procedures and processes that the UK and US use – and is not a reflection that the UK’s regulatory approval is less rigorous than the US.

It has been reported that the vaccine will begin it’s rollout next week. This will start with the most vulnerable people. In total, the UK has ordered 40 million doses of this vaccine – which is enough to immunise 20 million people. While this is not enough for us to immunise the whole of the UK, we are still awaiting approval from the regulator on the other vaccines that have been ordered.

Once these have been approved, the UK will have more than enough doses to vaccinate the whole of the population.

We’ll have to wait and see how long it will be until the Oxford and Moderna vaccines are approved.