Home Daily Briefing February 3: Navalny in Prison, the Film That Inspired the Government, and Warzone Cheats 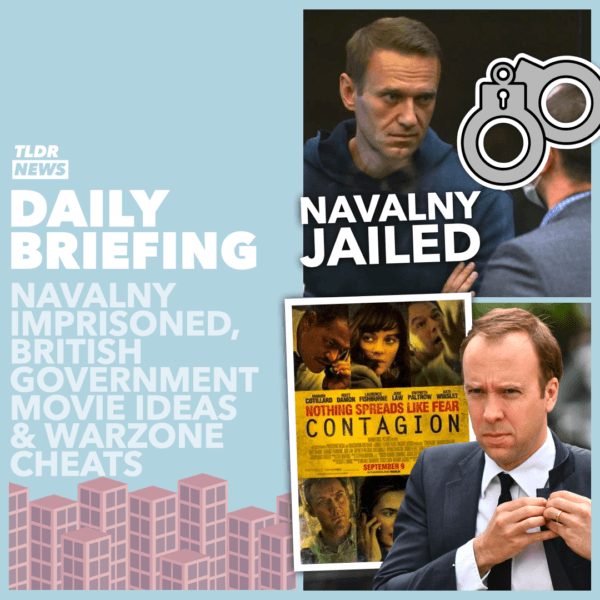 February 3: Navalny in Prison, the Film That Inspired the Government, and Warzone Cheats

In the first story today, we go to Russia to discuss the jailing of one of Russia’s major opposition leaders. You may remember that we also featured Mr. Navalny quite a few times last year in the Daily Briefing – due to his poisoning, supposedly at the hands of the Russian government. Well, he has since recovered in Germany and returned to Russia.

As he left the plane upon landing in Russia, he was arrested for breaching his suspended sentence contentions by travelling to Germany. He was handed this sentence in 2014, supposedly for embezzlement – although he maintains that it was politically motivated.

Since he was arrested, hundreds of thousands throughout Russia protested what was perceived as an attempt by President Putin at silencing opposition. Around 1,000 protestors were arrested as a result.

Today, the court has announced that Mr. Navalny will be sentenced to two years and eight months in prison for breaking his suspended sentence conditions. While in the court, Mr. Navalny made heart gestures towards his wife in the court and told her “Don’t be sad! Everything’s going to be alright!”. Many major politicians around the world took the opportunity to stand up for Mr. Navalny today too.

The US secretary of state said he was “deeply concerned” and called for Mr. Navalny’s immediate release. The German foreign minister called it a “bitter blow” for justice in Russia. Boris Johnson called it “pure cowardice”.

Clearly, leaders of the western world are in agreement that Mr. Navalny is a political prisoner, and that this is a clear attempt by Mr. Putin at stopping the opposition gaining power.

The Film That Inspired the Government

In the second story today, we move to the UK to discuss a film that, it has today been announced, has inspired the UK government’s vaccine strategy. As you can probably imagine, the film was about a pandemic – they weren’t just sitting watching Avengers Endgame, deciding that we should start collecting some random gems or something. The film in question is one released in 2011 called Contegion.

Matt Hancock admitted this morning that upon watching that film, he became aware of the importance of securing vaccines as quickly as they are approved. While he admitted that this was a factor in his decision making, he was careful to point out that it was not his only source of information. He did point out though that the film was based on the advice of some “very serious epidemiologists”

In the film, a vaccine is produced but there are not enough vaccines to go around – so, governments decide to allocate vaccines based on a lottery. An advisor supposedly suggested that Mr Hancock referred to the ending of the film when discussing vaccine procurement.

“In the film, it shows that the moment of highest stress around the vaccine programme is not in fact before it’s rolled out, when actually it’s the scientists and the manufacturers working together at pace, it’s afterwards when there is a huge row about order of priority.”

He then went on to say that this is why we have the priority list drawn up by the Joint Committee on Vaccines and Immunisations.

Let’s all just be glad that it hasn’t yet resorted to a lottery.

In the last story today, we discuss something we rarely discuss: video game news. Some of you will likely know about the Call of Duty game released last year called ‘Warzone’. It pits 150 players against each other in a battle-royale scenario where only one team comes out on top. Due to this format, the game is particularly competitive.

Because of this, cheating is particularly infuriating. Having spent far too many hours on the game, I can personally admit that losing in a 1v1 to someone who is clearly using cheats to ensure that their gun traces your movements – including through opaque objects – certainly increases my blood pressure.

Well, it turns out that I’m not alone. Many, many people have voiced their frustration online. Some have even gone further, quitting the game altogether. One of the biggest online Warzone streamers, Vikkstar, has quit the game citing cheats.

The Call of Duty developers have today addressed the issue – announcing that 60,000 accounts had been banned in a single day. Since the game launched, more than 300,000 accounts have been permanently banned.

While this is a move in the right direction, it’s right to question why Call of Duty find this such a problem. Other games don’t appear to have such a widespread issue with this. Well, one potential reason is because Call of Duty haven’t outsourced their anti-cheat software – as some other games (like last summer’s smash hit Fall Guys)  have done.

Irrespective, at least they have now addressed the problem – and hopefully I can simply lose to the vast numbers of players who are better than me and not come across cheats anymore!