Home Daily Briefing March 03: The Budget, US Vaccinations, and a Trip to the Moon 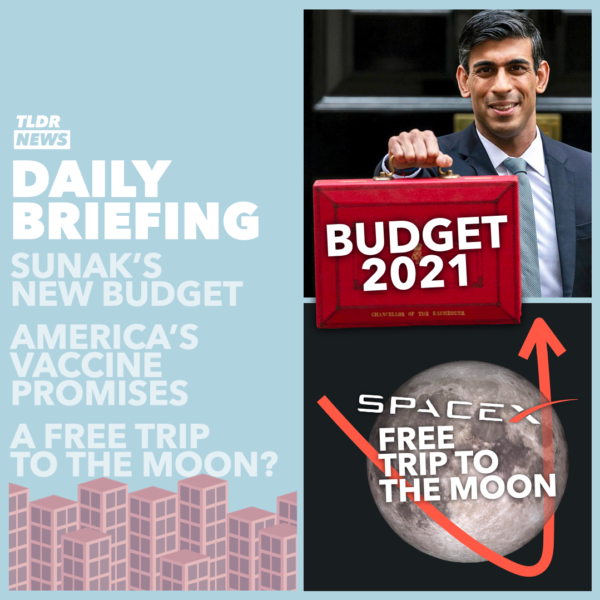 March 03: The Budget, US Vaccinations, and a Trip to the Moon

Since the pandemic began, the government has taken on a huge amount of debt – in an attempt to stop businesses collapsing and unemployment skyrocketing. It was suggested by the Office for Budget Responsibility (OBR) that unemployment could have hit 11.9% – but thanks to the government’s interventions, it’s now expected to be only 6.5%.

However, achieving this wasn’t cheap. The OBR has suggested that in the next few years, UK debt will peak at 98%.

So, in order to ensure that all the work done so far to keep businesses afloat aren’t undone whilst also ensuring that we don’t drown in debt, the chancellor broke the budget down into three parts. The first deals with support measures. The second deals with ‘fixing the finances’. And the last deals with building the future economy. We’ll go through the biggest announcements in each of these sections.

As you can see, these are expensive pledges. The coronavirus support package itself has cost over £352bn. So, it’s easy to see why Mr. Sunak has had to introduce some mechanisms to pay for them:

The following measures have been introduced in order to pay for the pandemic. Included in this list are measures that ensure that everyday people are not shouldering the burden of the cost:

While some of these – including the tax increase for corporations – may seem like the beginning of a tough financial future, Mr. Sunak did try and end on a positive with his third section:

The following were the announcements made about the future economy:

There were, obviously, many other announcements – but to stop this section being as long as the budget itself, we had to be selective!

Before we move to the next two stories, if you don’t normally watch the Daily Briefing please consider subscribing. To make the Daily Briefing financially viable long term we do need your support, so please subscribe & share with your friends.

For the second story today, we move to the US to discuss the vaccination goals of US president Joe Biden. While the US has had a tough time dealing with the impact of the pandemic, the end may be in sight. President Biden has today promised that, by the end of May, there will be enough vaccines for every adult in the US.

The US has done well so far with its vaccination target – vaccinating 76 million people, well on course for the 100 million in 100 days target set by the president. This roughly equates to about 1.74 million vaccines being administered every day, which is a phenomenal achievement.

Among those that have been vaccinated in this recent push was Dolly Parton. At 75 years old, she has been accepted the offer to be vaccinated, doing so at Vanderbilt University Medical Center in Nashville, Tennessee. Exceptionally popular in the US, she no doubt hopes that having this done on TV will encourage others to get vaccinated too.

Additionally, just before she got vaccinated, she sang her popular song ‘Jolene’, with the chorus changed to ‘vaccine’. Whether this will be released as a full blown single is, as yet, unknown.

A Trip to the Moon

In the last story of the Daily Briefing today, we discuss a moon trip set to occur in 2023. Over the last few decades, many different companies have sprung up to compete with NASA’s space exploration monopoly in the US. One of the most notable is SpaceX, led by Tesla owner and real-life Tony Stark, Elon Musk. SpaceX has promised to fly around the moon with a few civilians, alongside the crew, in 2023 on a mission called dearMoon.

Japanese billionaire Yusaku Maezawa has purchased all the available seats, with the aim of giving them away for free to “people of all kinds of backgrounds”. He has stated that there are two criteria for people to be offered a place.

Firstly, they should want to advance whatever activity it is that they’re into to help greater society. Secondly, they should be willing to help other crewmates who want to achieve the same goal.

He previously stated that he was looking for a girlfriend to accompany him too – with a search being conducted for such a companion. Over 28,000 over-20s applied before Mr. Maezawa cancelled it due to “mixed feelings”.

We’ll need to see whether his search for crewmates is more successful!