Home Daily Briefing November 03: The US Election is Here, An Attack in Vienna, and Testing Liverpool 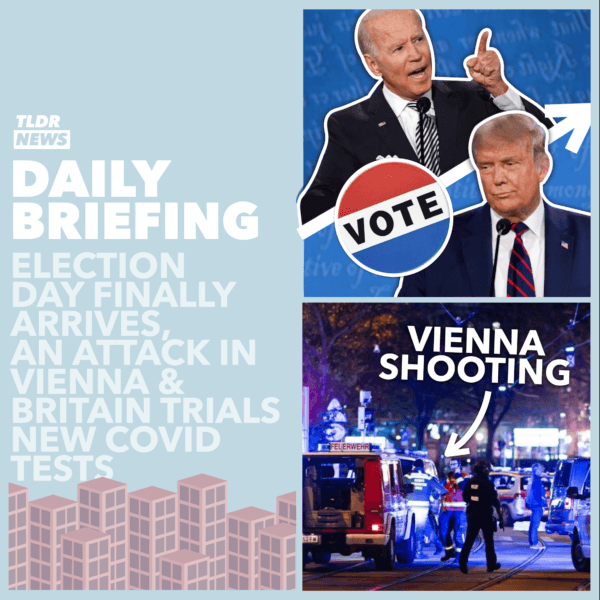 November 03: The US Election is Here, An Attack in Vienna, and Testing Liverpool

The US Election is Here!

It’s finally election day! After months of preparation, planning, campaigning and TLDR News US videos, the US is now able to choose its next leader. While some leaders have been elected at a particularly tumultuous time in history – look at Obama inheriting office right after the 2008 financial crisis – very few can claim that they have been elected in the middle of a global pandemic that has already tragically seen over a million lives lost.

So, as Biden and Trump battle it out for the keys to the White House, let’s have a little look at some of the key moments in the final few hours of the campaign trail:

Hopefully by this time tomorrow we will know exactly who will lead the US through one of the biggest crises since the Second World War.

To find out more about election night, the states to watch and what to keep an eye out for – check out the latest Politics Unpacked podcast where the TLDR US team discuss how to watch such an unprecedented election.

An Attack in Vienna

In the second news story today, we move on to the tragic terror attack that took place in Vienna last night. At around 8pm, a gunman went into the busy streets of the capital (set to go into lockdown in only a few hours time) and started shooting innocent people. The gunman went to six different locations during the course of his attack. 17 people were shot, 7 of which are believed to be in a situation where they could lose their lives.

Some ministers in the Austrian government (such as Karl Nehammer, the interior minister) have claimed that the attack was motivated by Islam. The Austrian Chancellor (Sebastian Kurz), though, claimed that the battle of the nation was not between religions, but instead between ‘civility and barbarism’.

The perpetrator of the attack is thought to be a 20 year old who was previously convicted of trying to flee the country to join the Islamic State (IS). He was released early due to more lenient sentencing. He is not yet believed to have been arrested, which has led to the authorities urging people to stay home while the investigation is ongoing.

President Macron of France tweeted his support of Austria, only days after an attack in Paris. He said “after France, it is a friendly nation that has been attacked. This is our Europe. Our enemies must know who they’re dealing with. We will concede nothing,”

Our thoughts are with the families of all of those affected, and we hope that the Austrian authorities manage to find all of those who were associated with this cowardly and barbaric attack.

In the final story of the Daily Briefing today, we look at the progress of ‘Operation Moonshot’ that the UK Prime Minister announced weeks ago. While we here in the UK have been told that we will be in a national lockdown yet again on Thursday, the good news is that new technologies are being used, hopefully, to ensure that it is only a short one.

Quick coronavirus tests that can give results in only 15 minutes, are first going to be used in Liverpool – in order to determine who can pass the virus on. These tests will be given, hopefully, to the entire population every two weeks. The army will help in the distribution of such tests.

Scientists have suggested that, if successful, the rollout of the tests could as much as halve the reproduction number (R-number) of the virus. This means that the transmission of the virus will be significantly lesser.

Additionally, if this trial in Liverpool works, the Prime Minister is hoping to roll-out these tests in cities across the UK in the run-up to Christmas – presumably in an attempt to prevent himself becoming the Prime Minister who cancelled Christmas.