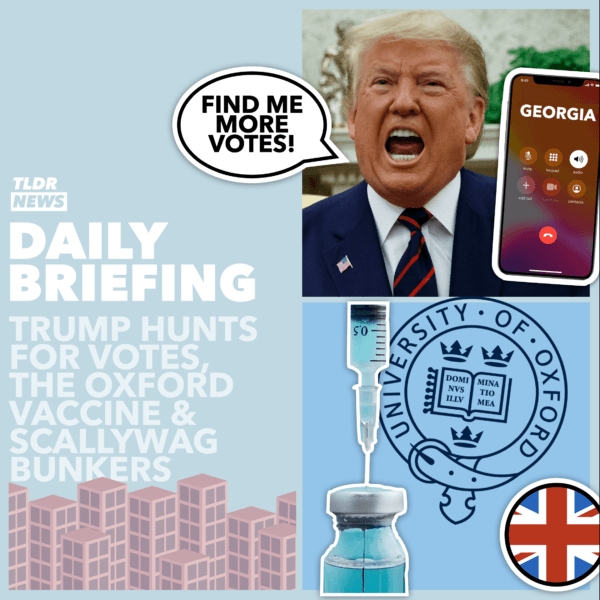 January 04: Trump’s Vote Dump, The Next Vaccine, and Scallywag Bunkers

In the first story of the briefing today, we discuss a particularly controversial phone call. This is the phone call between US President Donald Trump and Georgia’s Secretary of State Brad Raffensperger. The President appears to be trying to convince Mr. Raffensperger that Georgia’s election results might be off – and that he, in fact, may have actually won.

The President begins by ensuring that the Secretary of State understands that there is “nothing wrong with saying you’ve recalculated”, before urging him to find 11,780 votes. This number is significant, as it would put the President one vote ahead of President Elect Biden in Georgia. It’s important to note here, though, that even if the State of Georgia did ‘find’ these votes and put Trump ahead – Georgia alone is not enough to overturn the election result in the Electoral College.

President Elect Biden won 306 Electoral College votes, President Trump won only 232. If Georgia’s votes went to Trump, Biden would go down to 290, and Trump would go up to 248. The result would, therefore, be the same.

Perhaps the President’s strategy is to persuade a couple of states to ‘find’ him the votes he needs to win. Together, these states may be enough to put him above the 270 Electoral College votes required for him to remain in the White House for another 4 years.

As the President has failed to produce any hard evidence of electoral fraud, he has found it particularly difficult to even convince people in his own party that he was robbed in the election. This is well demonstrated by the fact that in the aforementioned call, Mr. Raffensperger quite bluntly told the President “the challenge is that the data you have is wrong”.

Before we continue – if you set yourself a new years resolution to read more or spend more time off the internet, then you might be interested in the TLDR Book Club. Each month eligible patrons can take part in the club and join the live discussion at the end of the month to discuss the book with myself and other TLDR team members. This month the book’s For the Record by former UK Prime Minister David Cameron. Find a link to the Patreon & sign up now if you want to get involved.

In the second story in the Daily Briefing today, we move to the UK to discuss the rollout of coronavirus vaccines. In early December, the UK Medicines and Healthcare products Regulatory Agency (MHRA) approved the Pfizer vaccine for use. This was then able to be administered in hospitals around the UK to those that are most vulnerable.

In January, the MHRA approved the Oxford vaccine for use – making it the second vaccine to be approved for use in the UK. Today, this vaccine has started to be rolled out. The advantage it has over the Pfizer vaccine is the less demanding storage requirements and the fact that it is less expensive.

These advantages mean that it can be rolled out in much larger numbers – with some speculating that 2 million doses could be administered per week. Today, this mass vaccination program (with the Oxford vaccine) has begun. It started with 82 year old Oxford resident Mr. Pinker receiving the vaccine, who said “I am so pleased to be getting the Covid vaccine today and really proud that it is one that was invented in Oxford”

Over the course of the day, many more were vaccinated. Let’s hope that the rate of vaccination increases over the next few weeks, so that we can save as many lives as possible and end the pandemic as soon as possible!

In the final story of the briefing today, we discuss some historical UK news. So historical, in fact, that it relates to World War II. This is the news that the public are being urged by historians to help discover where ‘Scallywag bunkers’ are.

Back in 1940, Britain was preparing itself for a Nazi invasion. If such an invasion happened, and Britain found itself living under a puppet Nazi government, a plan conceived by the then Prime Minister Winston Churchill would be put into action. This plan was to activate the scallywags, a group of saboteurs stationed throughout the country who would live in specially constructed bunkers whose job would be to cause a nuisance to the puppet regime. They would blow up bridges of strategic importance, assassinate Nazi officials and demolish important buildings. This would, in effect, be a last ditch effort to defend British democracy.

Because of the nature of their work, their life expectancy was only 12 days – and the bunkers were constructed as such.

The reason this story has come back to the fore now is because the operation was so secretive. Members of the scallywags were not soldiers, and thus had no official records. Historians are now appealing to the public to find scallywag bunkers so they can be recorded – before they are lost to history entirely. It has been suggested that there could be up to 600 bunkers around the UK.

So, if you know of a bunker near you that you’ve always wondered about – it might be worth getting in touch with the historians!