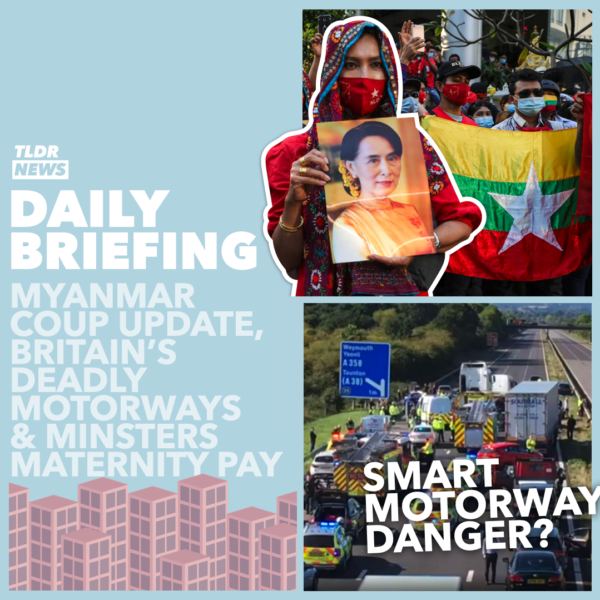 In the first story today, we go to Myanmar to discuss the ongoing coup. If you regularly follow the Daily Briefing, then you will hopefully have seen that we covered the actual Myanmar coup itself a few days ago – if you want to check it out, there is a link here. Since then, though, a lot has happened, so we thought we’d provide an update for you.

Since the military took control a few days ago, they have had to deal with a rather large amount of backlash from the public. Yesterday, health workers organised a mass walk out in protest at the military regime. Protestors have also banged pots and pans together on their balcony, again, as a way of signalling their discontent at their military leaders.

Both of these events were organised through Facebook. Unfortunately for the protestors, the military leaders noticed this – and have taken action to try and halt such protests by blocking the site until at least Sunday. This is a big move, especially considering that around half the nation uses the site.

Some protests have still taken place, though, despite the website’s block. It is possible that some are still using the website by using virtual private networks (VPNs) – although, it’s unlikely that everyone is doing this. Therefore, the block is still stopping a large number of people from being able to use the site.

In addition to these protests, it has been announced that the democratically elected leader who was toppled in the coup, Aung San Suu Kyi, will be charged with possession of illegally imported walkie-talkies – which could lead to a sentence of two years imprisonment. It’s hard to see how this isn’t a politically motivated charge.

Let’s all hope that with international assistance democracy can prevail yet again in Myanmar.

This is a particularly important issue at the moment – as the attorney general Suella Braverman is due to give birth by the end of the month. If the rule changes are to apply to her, they need to be changed sooner rather than later. This sense of urgency is what has prompted Labour to back the government’s proposals. Without this urgency, it’s likely they will have pushed for the new rules to apply to more people. In doing this though, more debate would need to occur – which risks the rules being enacted after Ms. Braverman’s child is born.

The rules that have been proposed will allow cabinet ministers to take six months off for maternity leave with full pay.

As we mentioned, while this is a step in the right direction, Labour seem to want this to go further or apply to more people. So, while they’re backing the current rules now – it’s likely they may address the issue again in the future.

In the last story today, we stay in the UK to discuss the newly implemented ‘smart motorways’. A smart motorway is an attempt to increase motorway capacity, and therefore reduce traffic, by opening up the hard shoulder (which is commonly used to allow broken-down cars to refuge). The ‘smart’ element is the cameras that should be used to detect when a car is broken down in the hard shoulder – which will then trigger the lane to be closed, if it was previously open. The issue is that if the cameras don’t work as intended, then a car could be broken down in a ‘live lane’ – putting them in danger of being rear-ended at high speeds by cars using the lane.

This has happened many many times – and it has been shown that 38 people have died on smart motorways since 2015.

His solution, instead, is to bring forward the date for “vehicle stop detection” to be implemented on smart motorways from 2023 to next year.