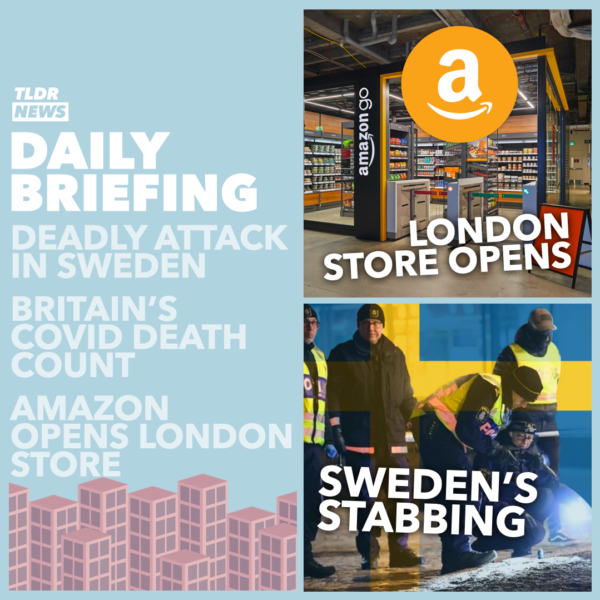 March 04: An Attack in Sweden, COVID Deaths, and Amazon Fresh

An Attack in Sweden

In the first story today, we go to Sweden to discuss the deeply saddening news about a stabbing attack. Yesterday, at around 3pm, a man went on a stabbing spree in Vetlanda – injuring 7 people (3 of whom were seriously injured, with injuries that are potentially life-threatening).

It is not clear exactly what weapon was used, or what the motive of the attacker was. Currently, the case is being treated as attempted murder – although, possible terror motives are also being investigated. Currently, the assailant is in hospital, following them being shot by police. It is believed that the assailant is not in a life-threatening position.

In response to the attack, Prime Minister Stefan Lofven stated  “We confront such heinous acts with the combined force of our society”.

Our thoughts all with those who have been injured in this truly evil attack.

For the second story today, we move back to the UK to discuss the impact of coronavirus deaths. It’s fair to say that the virus has had more of an impact on the older generation than the young. While the young have had to stop socialising, it is the elderly that have been the ones primarily losing their lives to the coronavirus. As we know, the older you get, the more likely you are to be hospitalised/die.

That’s why the vaccination program started with the eldest, and has been working it’s way down through the age bands. While the number of elderly people losing their lives has truly been a national tragedy, it can only be a positive that the vaccine rollout has reached such a high proportion of such people.

However, unfortunately, it’s not all good news. Included in yesterday’s Office for Budget Responsibility (OBR) report, it was suggested that by 2022 the amount the government has to spend on state pensions will fall by £1.5bn. Additionally, about £0.9bn could be raised from inheritance tax. These figures demonstrate the sheer loss of life among older generations.

It just goes to show that while people are starting to become optimistic about the reopening plans, people have lost loved ones and will continue to do so. It’s important that we all bear this in mind in the coming months.

In the last story of the Daily Briefing today, we end on something a bit more positive – some news about emerging technology. Over the last year, it’s likely that you’ve used a food delivery service or click and collect at least once. These services allow you to cut down the time you’re actually in a shop – making it both easier and safer for the customer.

It has today been announced that there is a new technology helping people to do their shopping: Amazon Fresh. This unique shopping experience from Amazon has been running in the US for a few years now, but today they opened the first international location in Ealing, London.

Perhaps you do want to venture into a shop, but don’t want to have to queue to pay at the end. Maybe this is from a ‘avoiding the virus’ standpoint, or you just really do not want to queue. Well either way, the new Amazon Fresh store will be right up your alley.

Upon entering, customers are required to scan their phones, and then they are able to simply pick things up and walk out. They will be charged on Amazon for anything they take with them.

In order to facilitate this, each store uses cameras and sensors to track each shopper around the store. They are accurate enough to be able to distinguish exactly which item each shopper picks up. This, though, has prompted some privacy concerns, with some describing it as “dystopian”.

What do you think though? Let us know in the comments below.