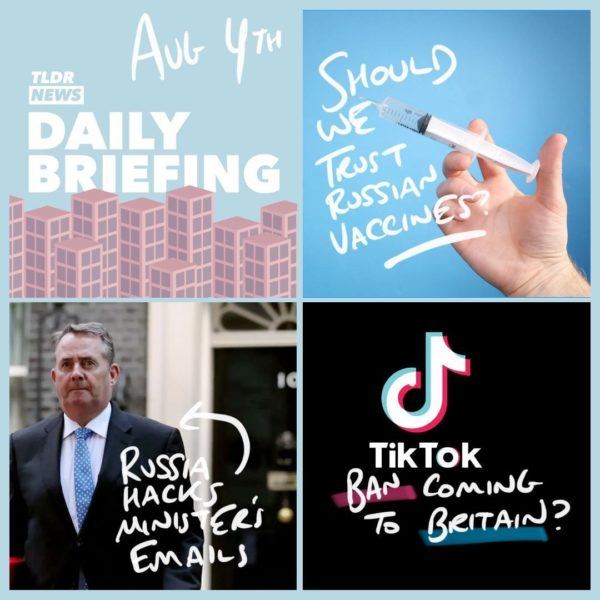 August 4th: The Russian Vaccine, Liam Fox and the Russians and TikTok

The first story in today’s briefing relates to the proposed coronavirus vaccine from Russia. Although Russia has claimed that they may be the first nation to produce a coronavirus vaccine, the WHO has advised people to use caution with this.

This is because the Russian vaccine is not one of the six vaccines the WHO recognises is in the final phase of clinical trials. Russia has not actually released any details about how they have tested this vaccine to ensure it is safe. This has prompted Dr. Anthony Fauci in the US to state that he hopes “the Chinese and the Russians are actually testing the vaccine before administering the vaccine to anyone”.

The Telegraph has also claimed that London will likely reject a Russian vaccine on the grounds that they do not know how it has been tested and whether it is actually safe for people to use. This decision is likely informed both by what the WHO has said and the increasing tensions between the UK and Russia (through the publication of the Russia Report, for example).

Liam Fox and the Russians

Related to this story about Russian-UK tension is a story that has broken today about the former International Trade Secretary, Liam Fox, having documents leaked by Russian hackers about a UK-US trade deal.

This document was then used by Labour to claim that the NHS was at risk. The reason this story is so significant is that it adds to the findings over the last few weeks that Russia has had a serious impact in UK democracy and that hackers have managed to access the emails of a serving UK minister.

A spokesperson for the National Cyber Security Centre has said that this is an ongoing investigation, and it would therefore be inappropriate to comment. We will bring you updates on this story as and when they happen.

Specifically for you concert-goers this next news story is about Glastonbury. Although the festival had to be postponed this year (on its fiftieth anniversary) due to coronavirus, its founder has claimed that he and his team are trying to “move heaven and earth” in order to ensure the festival runs as normal next year.

However, he has accepted that this may be “wishful thinking” as this would mean that around 250,000 people attending an event in person. Even though the festival isn’t scheduled until next June, this may be a little but soon.

While it has been fairly big news over the last few days that the US government is proposing to ban TikTok in the US unless it is bought, there has been substantially less written about TikTok’s status in the UK.

The backbench MP Neil O’Brien, who is a co-founder of the China Research Group, has called for a report to be published which looks into the safety of TikTok from a national security perspective in the UK.

For those of you who have not been following this story, TikTok is a Chinese app which is fairly secretive about the data it collects on users. There are concerns that TikTok is sending sensitive data that it collects to Beijing. Although, both Beijing and TikTok deny this. This has prompted the President to set a date (15th September) by which it must be bought by a US company, otherwise it will be banned in the US.

The UK currently has no plans to do the same. Mr O’Brien’s supposed report may be the first step in the UK also potentially banning TikTok.

As ever, we will continue to follow this story and provide updates in future Daily Briefings if anything changes.