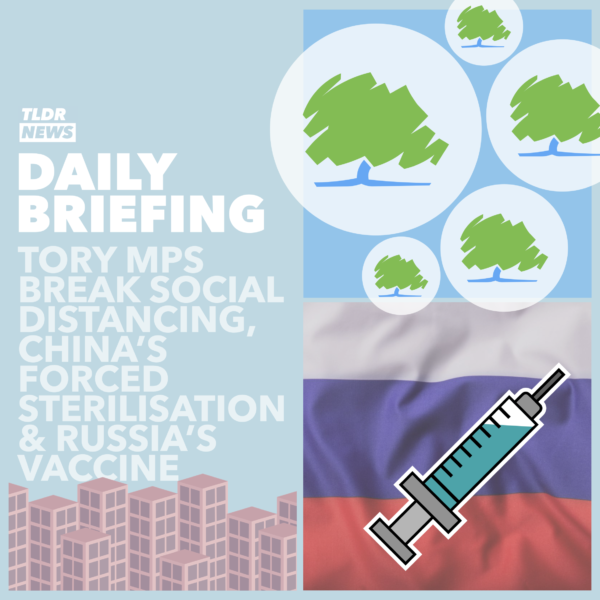 The first news story today relates to the Prime Minister’s own MPs breaking social distancing advice. Although the Labour Party has elected to hold meetings of their MPs virtually, the Conservatives have not yet done this. In one of these meetings of Conservative MPs, social distancing was not observed as the room was fit for only 29 people, but a whopping 50 crammed themselves in. This is, at least, according to the Liberal Democrats.

Those that were present at the meeting have claimed that although social distancing was observed to begin with, with seats spaced out to allow suitable space between people, as the meeting progressed more people arrived and it became impossible for space to be maintained between people. A group supposedly huddled at the back of the room in order to hear what the Prime Minister was saying.

The chair of the 1922 committee, Graham Brady, refutes these claims though and has insisted that social distancing was followed throughout the meeting.

This story comes as a particularly interesting news item because, merely hours after the meeting, Downing Street posted a tweet warning that illegal meetings of over 30 people are illegal and can carry fines of up to £3,200.

In our second story today, more evidence has come to light of forced sterilisation in China’s Uighur Muslim internment camps. Qelbinur Sidik, who is from the Uighur minority, has claimed that she was forced to undergo sterilisation. She said that messages from local authorities stated that women between the ages of 19 and 59 from the Uighur minority group were expected to have intrauterine devices fitted or undergo forced sterilisation. This is part of a scheme to reduce the birthrates of Uighur women.

She also shared text messages she received from the local authorities, who told her that “If you fight with us at your door and refuse to collaborate with us, you will go to the police station and sit on the metal chair!!!!”.

Clearly, this is becoming a human rights issue, and a clear attempt from authorities in China to suppress a certain ethnic group. Between 2015 and 2018, the birthrates of Uighurs in certain areas of China dropped by more than 60%.

We will update you if any more evidence comes to light about this barbaric human rights violation.

In the last item in the Daily Briefing this week, we will discuss ‘Sputnik V’ – the vaccine being developed by Russia, which aims to be finished before any other nation on earth.

Although some are criticising the Russian government for not taking safety seriously enough, Russian scientists have claimed that those who have taken part in early tests have experienced “no serious adverse events” and that antibodies have been produced.

Although this has been claimed, many western scientists have claimed that Russia is moving far too quickly to be able to know for sure that it is safe. Clearly, the Russian government is trying to dispel any such fears – with both of Putin’s own daughters supposedly having already been injected with the vaccine, and the defence minister being injected with it on live TV.

Whether the vaccine is as safe and effective as Russia claims is yet to be seen.

For those of you who think the news is too long, be sure to check out the Daily Briefing on Monday