Home Daily Briefing November 04: A Lack of President, Prime Minister’s Questions, and Voting on the Lockdown 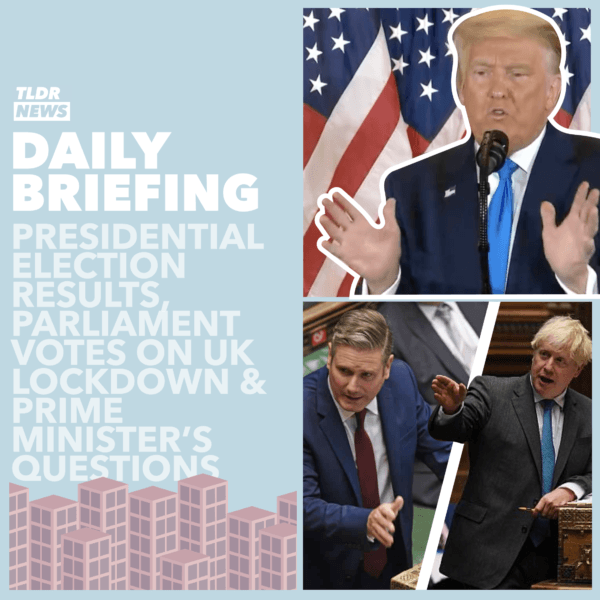 November 04: A Lack of President, Prime Minister’s Questions, and Voting on the Lockdown

A Lack of President

In the first story in the Daily Briefing today, we go over to the US to look at the reason I woke up at 5am, and why Jack hasn’t slept at all last night: the US presidential election. While many across the world have keenly been watching the results come in, some may be disappointed to find out that there is, as yet, no clear winner. Many have been asking why this is the case: in most presidential elections, we’d know who will lead the free world for another 4 years by this time.

The answer, as expected, is the pandemic. As many have voted early using postal ballots (most likely in order to try and avoid human contact, and reduce chances of catching the virus) the counting has taken a lot longer than normal. However, it’s worth saying that states are always still counting votes at this point. Even states which don’t normally allow people to vote by mail offer this opportunity to those serving in the military abroad or living abroad. So votes coming in later and counts taking weeks until the actual official results (rather than media projections) is completely normal. Ultimately, it’s a good thing too. No matter which side you’re on the most important thing should be the democratic process, and therefore everyone’s vote has to be counted for the results to hold any weight.

Having said this, a lot of states have already been declared. Biden is currently on 224 electoral college votes – whereas Trump is on 213 electoral college votes. The remaining states yet to declare are still counting votes. At the time of writing, Michigan and Wisconsin are expected to declare in the coming hours. To be honest, it’s impressive they’ve been able to count this many votes already, considering this is a record breaking election, with Biden currently sitting as the presidential candidate who received the most votes in US history – and as I said counts haven’t even finished,

It is important to note that there is currently no winner – and the election is on a knife edge. In the early hours today, the President went against this, claiming that he had already won the election. This is untrue, and many outlets have tried to do their best to refute this. Twitter has already labelled a tweet from the president as misleading. We will update you on who becomes the president when we find out. Also you can find out more about how the swing states voted and how the election’s shaking out in our video on TLDR US.

In the second news story today, we move back to the UK to have a look at Prime Minister’s Questions. Although this is an event in and about Britain – even this event couldn’t divorce itself from the US election. It started with the Prime Minister congratulating the Speaker of the House, Sir. Lindsay Hoyle, on a year in his current role. Specifically, he thanked Hoyle for “making the speakership great again”.

Then, the event actually began, with Starmer pushing Johnson to condemn Trump for already claiming he won the election, saying that it’s not up to candidates to say “when to stop counting votes”. Johnson replied by saying he does not comment on the democratic processes of friends and allies.

After a brief back-and-forth about the US election, Starmer told the Prime Minister about the number of lives lost between SAGE’s first suggestion of a temporary lockdown, and the announcement on Saturday of the lockdown. Johnson responded by claiming that the regional lockdown worked, and that it got the reproduction number (R-number) down.

Also discussing the temporary lockdown, Starmer asked Johnson whether it will definitely end on the 2nd December. Johnson unequivocally stated that it would – going against statements by his own cabinet minister Michael Gove. We will have to wait and see whether it is extended, or whether England will revert back to the regional lockdown.

Voting on the Lockdown

In the final story of the Daily Briefing today, we stay in the UK to look at the vote that is set to happen later today on the previously announced English lockdown. While Starmer criticised Johnson for his delay in calling lockdown, he has backed the call to now impose it. For this reason, the Labour Party will tonight back the governments’ proposed lockdown.

Therefore, it is seemingly incredibly likely that the lockdown will pass into law. Having said this, it is expected that up to 20 lockdown-sceptical Tory MPs will vote against their own government.

We will see later today how large the rebellion is.