Home Daily Briefing December 04: Masking Up for 100 Days, Thundersnow in Scotland, and the Scotch-Egg Police 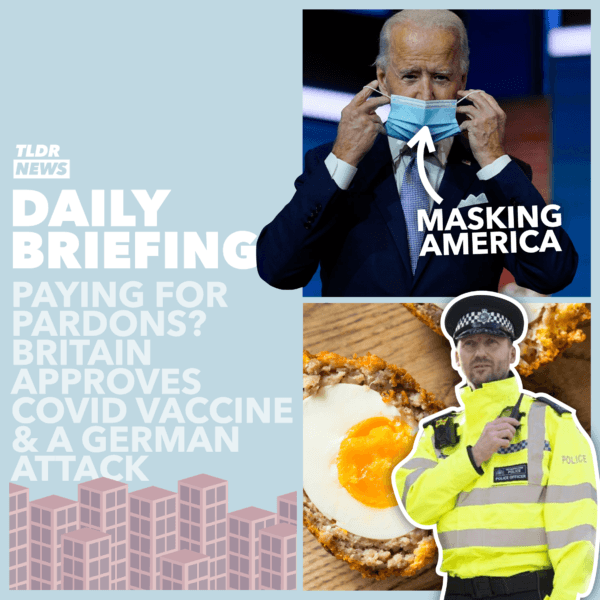 December 04: Masking Up for 100 Days, Thundersnow in Scotland, and the Scotch-Egg Police

In the first story in the Daily Briefing today, we talk about President-Elect Joe Biden’s plans for his first 100 days in office. While many presidents have entered into office with big plans for how they are going to revolutionise their country – Joe Biden has the unfortunate task of trying to get the coronavirus pandemic under control. While the current President has appeared to be reluctant to encourage mask-wearing more widely in the US, the incoming president has appeared to make it his top priority.

Today, he has told CNN that when he moves into the White House, he will ask Americans to wear masks as much as possible for 100 days. He claims this would cause a “serious reduction” in coronavirus cases. It has been made clear that constitutionally, he cannot require Americans to wear face coverings – nonetheless, he has made clear that he would set an example by wearing a face covering.

Despite the fact that he cannot require citizens to wear masks generally, he does have power over federal buildings. We mention this because the incoming president has planned to require people to wear face coverings when they are in federal buildings.

While this is a big step in the US towards stricter coronavirus rules, the president has promised that they will only last for the honeymoon period, which is 100 days.

Let’s all hope that this succeeds in bringing down the number of coronavirus cases in the US.

Before we continue, please hit subscribe and ring the bell if you like these videos, doing so makes sure that you’re updated when we post & when we get to 20,000 subs we have an announcement! Thanks for your support.

In the second story today, we move to the UK to discuss a freak weather event that rarely occurs – that of thundersnow. Many in Edinburgh, including the girlfriend of one of our TLDR writers, were awoken last night by what they thought was the sound of explosions. This was, though, actually the sound of thundersnow, which occurs (as the name might suggest) when a regular thunder and lightning event happens with the addition of lots of snow. The bang was localised in Edinburgh, because according to the Met Office, the snow actually minimises the loudness of the sound, preventing it being heard further afield.

Those in Edinburgh heard the thundersnow the loudest at around 5am. It caused a lot of confusion in Scotland, with some areas having to be closed off and the police actually having to explain to citizens what the phenomena is.

“”We have received a number of calls regarding people concerned about explosions heard. Please do not be alarmed, we are currently experiencing thunder and lightning”.

In the last story today, we move onto a very serious discussion that has dominated the political realm for the last week: are Scotch Eggs a substantial meal? Okay, try and contain your rage for when the video ends and save it for the comments section.

Well, while the debate isn’t yet resolved, the police have had to make a decision. They have actually gone into pubs to weigh in on the issue and removed those from pubs for breaking, what they perceived, as the rules. One pub owner in London claimed the police made clear they were given extra resources and were planning on using them.

It doesn’t help that this rule is so confusing, nor that different cabinet ministers have taken a different stance on it – including Michael Gove who actually changed his mind on the issue. Let’s hope the government soon actually provides clarity for an industry that has already faced incredible hardship this year.

That’s all for today – but we will be back tomorrow with another episode of This Week in Parliament, so make sure you’re subscribed so you don’t miss a thing.

Anyway, for those of you who think the news is too long, be sure to check out Monday’s Daily Briefing.