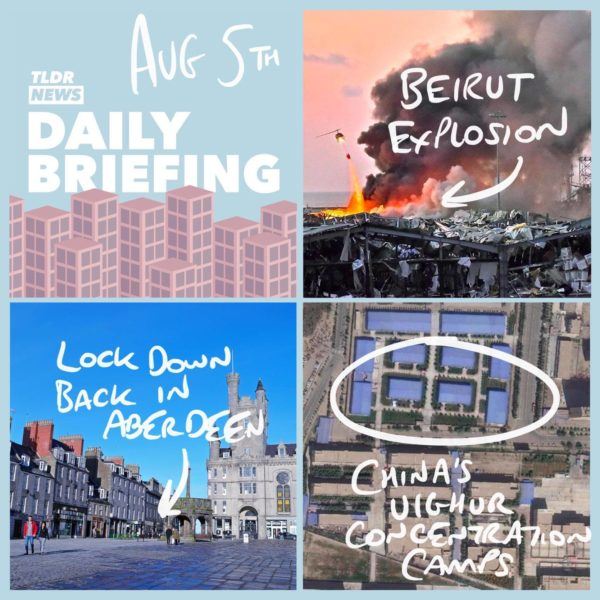 August 5th: An Explosion in Beirut, A Lockdown in Aberdeen and Chinese Uighur Internment Camps

An Explosion in Beirut

The first story in today’s Daily Briefing is about the explosion that tragically happened in Beirut last night. So far around 100 are confirmed to have died, but more are expected. This comes at an already difficult time for Lebanon – with hyperinflation making it difficult for people to buy necessities such as food, and the coronavirus pandemic pushing hospitals in Beirut into near collapse.

Many different world leaders and countries have pledged support. Prime Minister Johnson’s government has pledged either financial or technical support and French President Emmanuel Macron has planned to visit Beirut on Thursday. This is in addition to the $2m pledged from Australia to help aid the country rebuild after the tragedy.

We are shocked and saddened to hear what has happened in Beirut. If you want to donate and help out, please donate to the Disaster Relief Fund or the Lebanese Red Cross.

In UK news today, Aberdeen looks to be the next UK city to be placed under UK lockdown. One of the main changes there is the closing of pubs and restaurants – which have to be closed by 5pm tonight. This comes on the back of an increase of 54 people who have tested positive for coronavirus. This has qualified Aberdeen as a place that is experiencing a ‘local outbreak’.

In addition to the closure of pubs and restaurants, residents of Aberdeen are no longer allowed inside each others’ homes. They have also been told they cannot travel further than 5 miles for leisure purposes.

The Scottish government has advised that travelling for work or education purposes is allowed, but that any other travel is not advised. Those visiting the city do not need to leave, but have been told to be extra careful – especially when they return home.

In more global news, footage from inside a Chinese Uighur internment camp has been released showing shocking human rights violations. The video comes from Merdan Ghappar, who was a model. He showed that he was shackled to the bed in his cell. It also showed propaganda being broadcast from loudspeakers around the camp.

Alongside this video, Ghappar showed a letter to Muslim minority children, calling on them to “repent and surrender”.

Ghapar’s uncle claims that he is in the internment camp because he has family outside China who protest against Chinese human rights abuses.

This video will certainly make it more difficult to deny. You can also find out more about the wider issue in our full video on the topic.