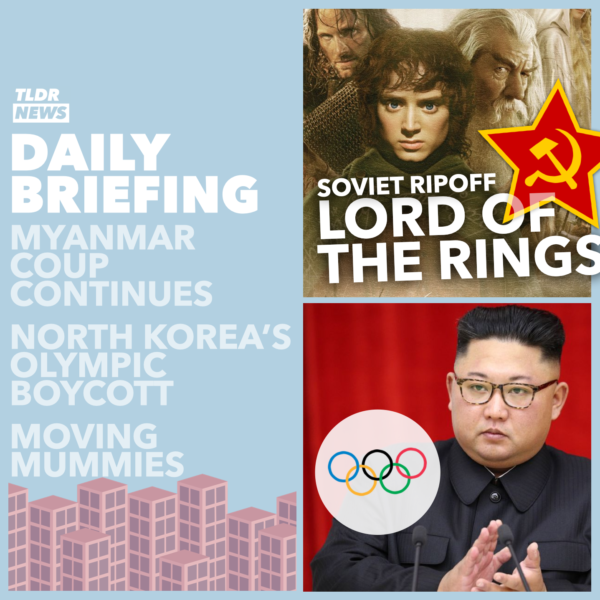 In the first story of the Daily Briefing today, we move to Myanmar. This is a story we’ve brought up many times in the last few weeks, and for good reason. The democratically elected government was toppled by a military junta, who are currently attempting to repress any and all groups that speak out against them.

This repression has taken the form of arrests, threats and – in the most serious cases – even deaths. So far the military has killed 570 people, which includes at least 43 children. Clearly, the situation is incredibly serious, and our thoughts are with all of those affected by the situation.

The reason the story is in the Daily Briefing today specifically, though, is because the military has published lists of dissidents that they perceive as a threat to their new regime. This list, too, not only includes names of ordinary citizens, but also celebrities and social media influencers.

One such influencer who is on the list is Myat Noe Aye (an actress), who said of her addition:

“I thought I might be really afraid when it comes to my turn but actually I’m more proud of myself for doing the right thing for my country”.

So far, there are 60 names on the list, but many expect that more names are to be added soon. The military claims that those on the list will be charged under section 505A of the penal code, which criminalises comments that “cause fear” or spread “false news”.

Additionally, the Guardian has reported on the unverified claim that the information ministry will fine broadcasters who show works of people on the list. Exactly how many of these celebrities will be arrested and tried, though, is as yet unknown.

In the second story today, we move to Egypt to discuss the moving of mummies. Although this story actually happened a couple of days ago, we thought that it’s definitely worth including today. While some of you may have been to Egypt yourself, and may have actually seen some of the mummified pharaohs with your own eyes, you may not know that they sometimes move to new museums. As such, authorities need to make sure that the former Egyptian rulers are not damaged – and that they are transported in a manner befitting their status.

Both points were undoubtedly met in the precession that took place on Saturday. The 22 mummies were transported in specially adapted cars – each of which bore the name of the ruler in gold letters on the front. Each mummy was surrounded by nitrogen to ensure that they were preserved from external conditions. Additionally, each car had their suspension adapted so that the ride was nice and smooth. In fact, even the roads the pharaohs were travelling on were resurfaced!

As for the pomp surrounding the move, it’s best to demonstrate this by showing you a video from the precession:

It’s certainly hard to argue that the ceremony wasn’t fit for a king – or in this case, pharoe.

In the third story today, we move to North Korea to discuss their attitude towards the upcoming 2021 olympics. Although North Korea may not be the first country on your mind when you think of countries that are successful in the Olympics – they may well be one of the more successful countries when they next participate. After all, it is claimed that Kim Jong-Il finished with 11 hole-in-ones on his very first attempt at golf (causing him to finish with a score of 38 under par). Not only this, but in 2010, North Korea managed to compete in the football world cup, and beat Brazil in the final.

However, this sporting prowess will unfortunately not be present in the 2021 Olympic Games – due to fears about COVID. This makes sense though to be fair – as the North Korean government has repeatedly claimed that the country is yet to report a single case of coronavirus.

As much as we’ve so far been quite flippant about the news so far – there is a more serious side to this story. Both North Korea and South Korea have used the Olympic Games to engage diplomatically with one another. In some cases, they’ve even walked into the games together – symbolically demonstrating that Korea is united.

Due to North Korea’s absence in the next Olympic Games, this form of diplomacy seems to be off the table. Let’s just hope that they find other, non-sporting, ways of easing tensions.

Soviet Lord of the Rings

In the last story today, we move to Russia to discuss this weekend’s internet sensation. Many of us have seemingly binged the entire Netflix catalogue of content throughout the numerous lockdowns of the last year. For this reason, many of us are looking for new content to keep us entertained until we’re finally allowed to meet family and friends again.

For Russian speaking Lord of the Rings fans, you may have come across your new binge-worthy show this weekend, thanks to Russian TV channel 5TV. Prior to the Soviet Union collapsing in 1991, a Russian version of Lord of the Rings was broadcast. This version of JRR Tolkein’s classics was put on YouTube over the weekend – attracting more than 700,000 people to watch it.

Before we show you some clips, it’s worth pointing out that is obviously not as high quality as the Hollywood version. It’s important to bare this in mind before watching:

Let us know what you think of this in the comments below.