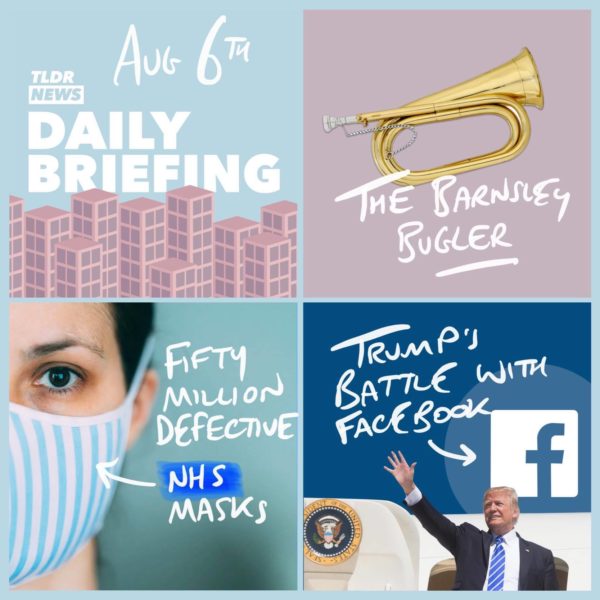 We’ll start today’s Daily Briefing with news of a man who is determined to pay his respects to those that have tragically lost their lives to the coronavirus. Army veteran Paul Goose has, so far, played a rendition of The Last Post on his bugle every day since the 29th March. This totals 130 renditions.

If you are wondering what The Last Post is, it is a “bugle call” which is usually associated with military funerals. It is commonly played to remember those that lost their lives during the First and Second World War.

Each of Paul Goose’s performances are dedicated to NHS staff, key workers and people who have died during this pandemic. He plans to continue this tradition until there is not a single death in England from the coronavirus.

He has said that he hopes the fact he is still playing shows people that the pandemic is not over.

In other UK news today, it appears that fifty million masks purchased by the UK government for use in hospitals will not be used in the NHS due to safety concerns. The issue with these masks relates to the way they attach to the face of the wearer.

The masks use ear-loops instead of head loops, which in effect mean that the masks do not fit tightly enough to the face of the wearer.

There is also some controversy around how the masks were purchased. It turns out that the government trade advisor who first approached the government about making the purchase also advised the board of the company who makes the masks. The advisor told the BBC, though, that this played no part in the decision to purchase the masks.

The deal cost the government £252m, most of which went to purchasing these masks. The government claimed it had to make purchases quickly in order to acquire PPE before other countries did. This was because, due to the coronavirus pandemic, demand for PPE increased massively. It is not clear what will happen to them now.

In other news today, France has recorded its highest number of cases in the last two months. This comes as fears of a second wave throughout Europe have been dominating the news over the past couple of weeks. Wednesday’s figures show that there were 1,695 new cases in only 24 hours.

Although both the UK and Italy have more deaths, France has been particularly badly affected by coronavirus, with over 30,000 deaths recorded so far.

Countries such as the UK are currently introducing measures whereby anyone who returns from a particularly badly affected region of Europe has been instructed to self-isolate. The rise in cases in France could be an indication that France could be next, if this trend continues. This would be bad for the tourist industry of France and anyone from the UK who is currently in France or has plans to visit in the near future.

This is, however, simply speculation and no announcement or statement has yet been made from the UK government suggesting that France would be added to the self-isolation list.

In US news, Facebook has today become the next social media outlet to remove a post by President Trump. The post in question was a video which claimed that children were “almost immune from COVID-19”. Although it is true that some children experience milder symptoms to adults – this is very different from saying they are ‘immune’.

Facebook claimed that this post  is a violation of its “policies around harmful COVID misinformation”. We will have to see whether Facebook continues to delete posts from the President and whether the President takes any action against Facebook.

For those of you who think the news is too long, have a read or listen to the next daily briefing.