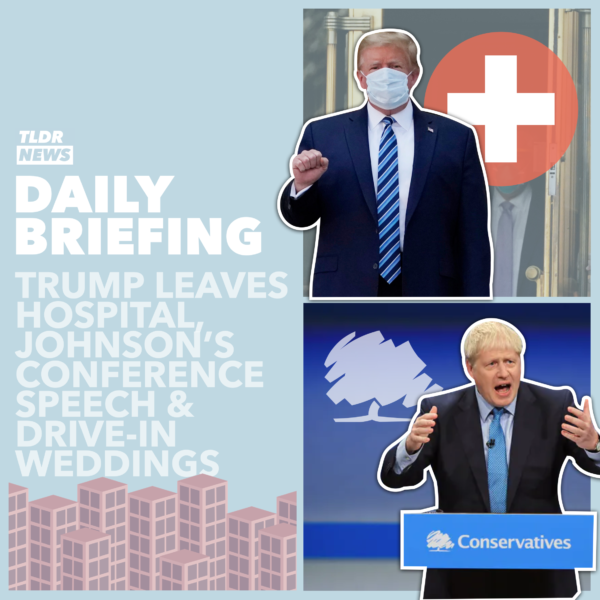 October 06th: A Drive-In Wedding, Trump and the Virus, and the Prime Minister’s Speech

Now, we all know that the pandemic has affected all of our big plans. Any big holidays, parties, birthdays and events have indefinitely been put on hold. But, as the pandemic shows no sign of being over yet, people are trying to find inventive ways around the current regulations. In a previous Daily Briefing, we discussed the Drive-In Panto that is gearing up to be ready for the Christmas season. Well, in a similar vein, a couple from Chelmsford have hosted a wedding for 250 people, by putting a big screen up and letting people watch from their cars.

The couple did a tour of the venue in a golf buggy, waving to all those that attended. Additionally, guests could order food from an app from their cars.

It seems like this COVID-secure wedding could catch on, as the events manager has already received emails from couples asking for the event to be replicated for them! Maybe this will be the standard wedding ceremony for the foreseeable future!

Trump and the Virus

In US news today, US President Donald Trump has been sent back to the White House after a short stint in hospital. Although he has tested positive for the virus, his doctors insist he has had only a mild reaction. Trump has tried to demonstrate that his experience with the virus shows that he has been a leader undeterred by danger. This is shown best through his claim that “I stood out front, I led, nobody that is a leader would not do what I did”.

He also used the opportunity to downplay the severity of the virus – by telling Americans not to let the virus “dominate your lives”. He went on to claim that the US has the “best medicines in the world, they’re all getting approved, and the vaccines are coming momentarily”.

With the election on the horizon, Trump is likely trying to demonstrate that the US has managed to relegate the virus from a society-halting killer to a mild inconvenience through scientific development under his leadership.

The 3rd November will show exactly how successful this strategy is.

In UK news today, the Prime Minister has addressed the Conservative Party Conference. In this speech, he spoke about the need to “build back better” – in other words, to use the coronavirus to improve the country. He said that he specifically wanted to “reform our system of government, to renew our infrastructure; to spread opportunity more widely and fairly and to create the conditions for a dynamic recovery that is led not by the state but by free enterprise”.

He also spoke of transforming “generation rent” into “generation buy” through the introduction of 5% deposit mortgages. The aim is to get young people on the property ladder.

Johnson also said that next time the conference meets, he expects people to be seated in the audience. So, at the very least, hopefully social contact will be back to how it was before by this time next year!