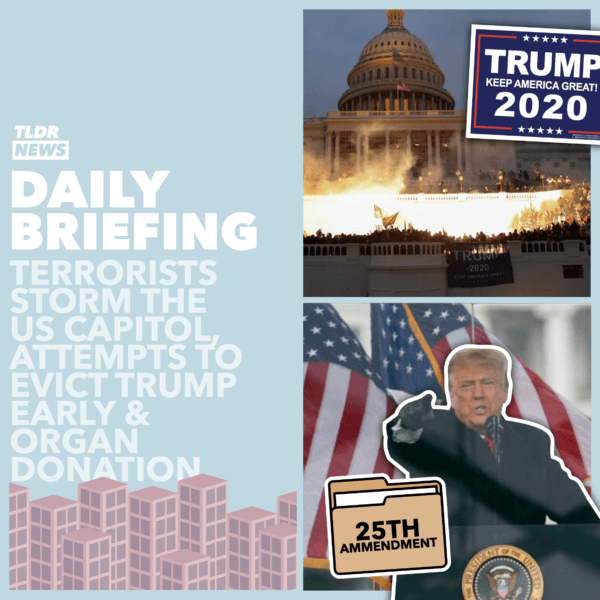 January 07: An Assault on Democracy, the 25th Amendment, and Organ Donation

An Assault on Democracy

In the first story of the briefing today, we discuss the big news that unfolded in the US last night. We’re sure you have probably already seen a lot about it – but we’ll try and provide an overview of what happened here. The night started out with the President speaking to a rally of his supporters who were intending to march in Washington. He told them to “make your voice heard” in relation to what he perceives as the fraudulent result of the US presidential election.

When the crowd did reach Washington – specifically, the Capitol Building – they became violent and successfully stormed the building. When inside they caused havoc, raiding the offices of senators and looting. This was a completely unprecedented night – and something that hasn’t happened since 1812.  What made it even more unprecedented was that the President didn’t fully condemn the criminals. He called them ‘great patriots’ – although, he did also tell them to go home. Many have compared his words to what he said about the BLM protestors last year – about which he said “when the looting starts, the shooting starts”.

This half-hearted attempt from the President to settle tensions was taken down by Twitter, as they saw it as breaking their rules. He also had his account suspended for 12 hours. This was swiftly followed by the suspension of his account on both Facebook and Instagram.

Many world leaders condemned the events – and some even went as far as criticising Trump personally. The UK’s Home Secretary, Priti Patel, specifically said that Trump’s remarks “led to violence”.

We’d like to take this opportunity to state that we condemn the events that unfolded in Washington in their entirety, and that we deeply regret that at least 4 people lost their lives last night.

Staying on the topic of the assault on democracy last night, we’re going to discuss the speculation through the night that the 25th amendment could be invoked in order to remove the power the President currently holds. It’s undoubtedly a long-shot, as it requires some of Trump’s closest allies to turn against him – but after last night, it seems that anything is possible.

This part of the Amendment has never been used before – and for good reason. In effect, it requires members of the President’s inner circle and own party in Congress to turn against them.

As we said, this eventuality is unlikely, but the Democrats are pushing for nonetheless. Democratic members of the House Judiciary Committee have signed a letter to Vice-President Mike Pence urging him to start the process of taking power from the President.

We’ll have to see whether this actually ends up happening – and whether 2021 gets off to an even crazier start than 2020.If you want to know more about the whole situation – we released a video going into more detail over on the TLDR US channel.

For the final story in today’s daily briefing, we discuss a heart-wrenching story about organ donation here in the UK. Sarah Bingham’s sons both have a rare genetic condition that requires them to undergo a kidney transplant.

Luckily for them, their mother is a match and is able to donate one of her kidneys. However, she can donate only one. This means that she has to decide which of her children to donate her kidney to. Their father has a different blood type, which means he is unable to be a donor.

This is a heart-wrenching position for Ms. Bingham to be in. There is a possibility that her sons could have a kidney donated by a friend or another family member – or that they could get one by waiting on the organ donor list.

There are 4,500 people in the UK waiting for a transplant, and those on the waiting list have to undergo regular dialysis while waiting. This is undoubtedly a difficult time for the family, and we cannot imagine how difficult the decision is.

For those of you who think the news is too long, be sure to check out tomorrow’s Daily Briefing