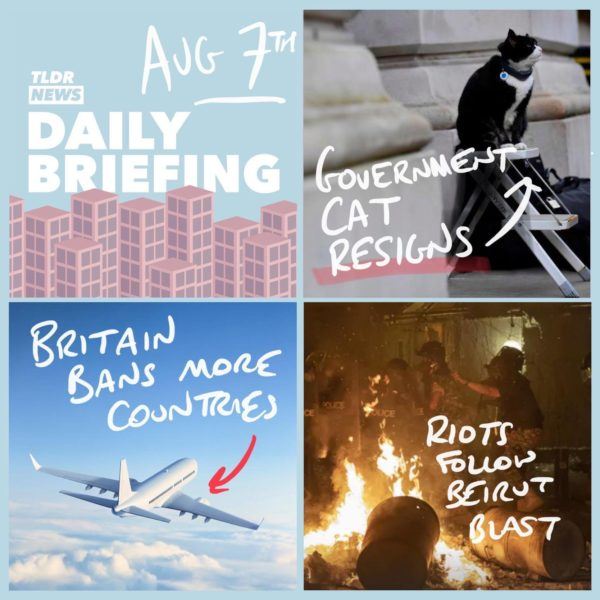 The Daily Briefing today starts with news of a senior British politician resigning his post, and withdrawing from the limelight. After a number of years battling it out in top-tier politics, it only makes sense to retire to the countryside, for some “me time”.

This is the news that Palmerston, the resident cat at the Foreign Office, is resigning his post. This will be a particular loss to any negotiations on behalf of the UK government. As Palmerston explains in his resignation letter, his signature move was “pretending to be asleep while overhearing all the foreign dignitaries’ conversations”.

Whether this form of intelligence gathering was used in any negotiations with the EU is, as yet, unknown.

In other more serious news, it has been announced that holidaymakers from the UK returning from Belgium, Andorra and the Bahamas will have to isolate for 14 days upon their return. These are the latest countries, who have experienced a rise in cases, to be put on the ‘red list’ by the UK government.

Ever since lockdown was eased on the 4th July, the UK government has made clear that any country could be added to this list. Although this causes frustration with people who have made plans to travel, knowing that they could be subject to a 14 day quarantine on their return due to reasons beyond their control, government has defended this move – with Chancellor Rishi Sunak telling Sky News “If we need to take action as you’ve seen overnight we will of course not hesitate to do that”.

In other related UK news today, it has been announced that coronavirus in the UK may be “levelling off”. This comes after a household survey was sent around by the Office for National Statistics. These findings are based on 120,000 completed nose and throat swab tests.

Although there was a low number of cases at the end of June, cases were beginning to rise again in July. The news comes at a time when cases are rising around the world, not least in Europe.

It is important that incorrect conclusions are not drawn from this. This does not mean that the virus is going away, simply that it is not rising exponentially currently.

In more global news today, following the explosion in Beirut, protestors have been demonstrating against their government. Even prior to the explosion, the government was struggling to maintain control – with hyperinflation beginning to kick in and coronavirus overwhelming hospitals.

In response to this protest, the Lebanese security forces fired teargas at protestors. This feeling of government negligence can even be seen among some politicians in Lebanon. The Lebanese ambassador to Jordan resigned today, too, citing negligence and calling for a leadership change – claiming “they should all go”, referring to the politicians.

This comes in the days following a huge explosion in the Lebanese capital of Beirut. Although it was believed to have been an accident the President of Lebanon, Michel Aoun, has today announced an investigation into whether a “rocket or a bomb” set off the explosion of ammonium nitrate.

If you want to help out, we have listed a number of charities that need donations in our video on the Beirut explosion. In addition, all money made from this video will be given to these charities.

For those of you who think the news is too long, have a read or listen to the next daily briefing on Monday.