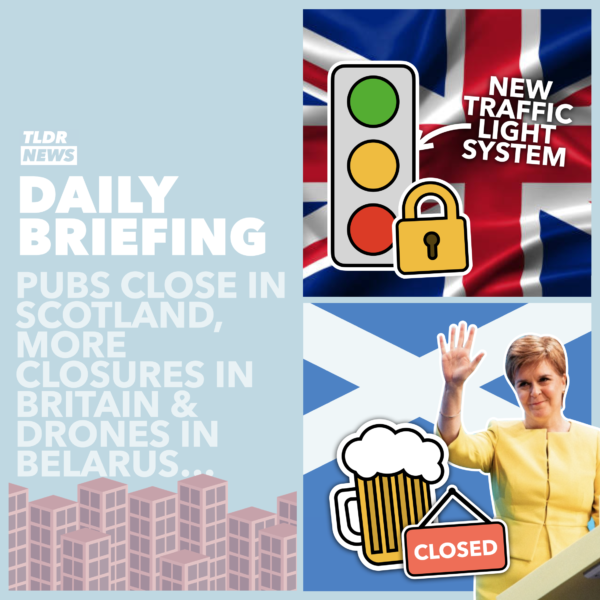 England has not yet seen pubs and restaurants be closed on a large scale – although, there have been some local lockdowns where pubs have been ordered to close, such as Leicester. However, in Scotland, a huge number of pubs and restaurants have been ordered to close. Although this isn’t yet a national order, and will only affect those living in the central belt of Scotland, this accounts for a huge number of people and edges Scotland closer to a return to a full lockdown.

Both Glasgow and Edinburgh are included in this new wave of restrictions.

In more UK news today, it has been revealed that the UK government may also look at closing more premises in England, seemingly in line with today’s decision by the Scottish government. Although this would be following in the footsteps of Scotland, it would be a different system.

It has been hinted that the UK government would implement a traffic light system to be used to determine which areas should go into local lockdown. Among the harshest measures would be the closure of pubs and restaurants and the banning of households mixing. The Health Secretary, Matt Hancock, has suggested that the virus spreads the most when households mix together in private residences. This is followed by people going to restaurants and pubs.

Therefore, while England has not had any further restrictions imposed on them today, this is a very real possibility in the near future.

Ever since the presidential election, the EU has been keen to try and sanction Belarus and show that they will not stand for democracy being trampled on in the way that it has. In fact, the UK even banned certain individuals from Belarus from travelling to the UK and members of the European Comissions spoke about their very strong opposition to President Lukashenko.

Therefore, the decision taken by the EU to give the authorities these drones – that some are wary could be used against protestors – will certainly raise some eyebrows.