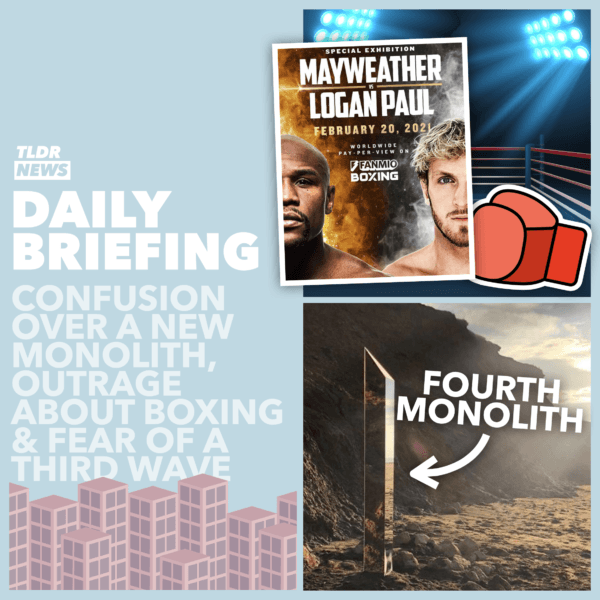 December 07: Outrage About Boxing, Confusion Over a New Monolith, and Fears of January Wave

Confusion Over a New Monolith

In the first story today, we discuss yet another monolith. By now, we’ll all remember the Utah monolith that started this whole saga. It was found in the middle of the desert, and there was a lot of speculation as to who put it there any why. It was even revealed that it had been there for years – thanks to satellite images. Not long after this monolith was discovered, it disappeared and another monolith was discovered in Romania.

Now though, a third mysterious monolith was discovered in the Isle of Wight. This one was made of wood, with mirrors stuck to each side. It has been partly buried, which implies that a fair amount of effort has been expended on its placement.

Many residents of the Isle of Wight have gone to the beach to have a look at the monolith that has hit national headlines for themselves. Although this appears to have inspired curiosity in the local area, it has also added to the feeling of curiosity and confusion globally about exactly what these monoliths are and what they mean.

Are they individual art installations? Are they all works from the same artist? Is the artist alive still? Will they claim ownership in the future? Or is it something completely different, like a sign that aliens have landed on earth and are trying to send us a very very poorly communicated message? Let us know your thoughts in the comments.

In the second story in the Daily Briefing today, we talk about boxing. We very rarely discuss sport news here – but as there has been some fairly big news about both boxing and the company responsible for a large portion of our revenue (YouTube) it was hard to say no to it’s inclusion in today’s briefing. This is because the widely anticipated fight between Floyd Mayweather Jr. and YouTube’s very own Logan Paul has now been confirmed. This follows months of speculation.

For those who aren’t all that into boxing, we’ll briefly discuss who both men are and what their history with the sport is. Floyd Mayweather Jr. is a veteran of the sport – having entered into 50 professional fights, and coming out on top in every single one of them. Of his 50 wins, 27 were won by knockout – which is an impressive feat. His 50th win was somewhat unorthodox, as it was against an opponent new to the sport: Conor McGregor, whose background was actually in Mixed Martial Arts (MMA).

Logan Paul, on the other hand, rose to fame through vlogging on YouTube. His only real experience on YouTube was with one amateur fight with KSI (in which he drew) and then one professional fight, again with KSI, in which he lost.

It therefore seems as though this fight is between the older, more experienced, veteran and the younger, less experienced, newcomer. Some will be excited for such a fight, but others are – well, less than happy. Some are feeling outraged that boxing is becoming dominated by amatures – specifically from the YouTube community. One such outraged figure is Dana White, the president of UFC. He said that “when people ask me what’s the state of boxing right now, that’s where it’s at. Didn’t that kid get beat up by the f*****g video game kid from England and now he’s going to fight Floyd Mayweather?”.

Regardless, considering how much money Mayweather earned from his last fight and the precedent set by previous YouTube boxing matches, both men are set for a big pay day.

The fight is scheduled for February 2021.

Fears of a January Wave

In the third story of the Daily Briefing, we move back to the UK to discuss the possibility of a third wave following the winter season. Andrew Haywood, professor of infectious disease epidemiology at University College London and a member of SAGE said that he found videos of crowded Christmas shopping areas “concerning”. He additionally stated that the “pandemic is certainly not over”.

What makes this statement concerning is that Christmas is coming up – and many will be spending time with family members and relatives in close proximity. This is thanks to the ‘christmas bubble’ that has been introduced by the government. This is all taking place right after a second peak and at a time when the NHS traditionally already has to deal with seasonal flu.

While it is currently unclear whether there will be a third wave, it makes sense to heed the advice of Professor Haywood and try and be sensible over the winter period in order to stop the virus spreading.