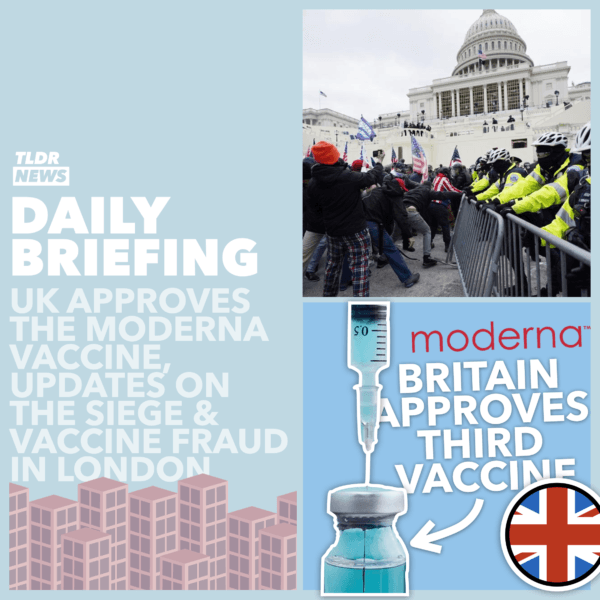 In the first story of the briefing today, we discuss the news about vaccines in the UK – as there appears to have been a lot of such news today. We’ll start with some of the most relieving news: it has been discovered that the Pfizer vaccine works against the new variants of the virus – specifically the UK strain and the South Africa strain.

This was discovered by submerging the two virus strains in blood samples taken from people who had received the vaccine.

In more good news, another vaccine has been approved by the Medicines and Healthcare products Regulatory Agency (MHRA). This is the Moderna vaccine. This means that all three major vaccines are now approved in the UK – which hopefully will increase the rate of vaccination.

In total, the UK has ordered 17 million of the aforementioned Moderna vaccine. Let’s hope this can be deployed as soon as possible, so we can win the “sprint” (as the Prime Minister called it) against the new virus variants!

Moving to the US for the second story today to discuss the Capitol siege. It seems like this will be in the news for many more days to come. Earlier today, YouTube announced that it would be introducing measures to stop misinformation about the 2020 election spreading.

YouTube content creators can be closed down through gaining ‘strikes’ against their channel. This is a “three strikes and you’re out” policy. However, even gaining a single strike will stop the creator being able to post or livestream temporarily. YouTube has made it clear that any content creator that uploads anything that contains mistruths about the election will be be given a strike.

This means that YouTube has joined the wide array of social media companies that have started introducing policies aimed at preventing misinformation spreading following the US Capitol siege.

For the final story in today’s daily briefing, we discuss a sickening story about vaccine fraud in the UK. As you will know, the UK has started its mass vaccination programme – which has started with the oldest and most vulnerable being first offered the vaccine. While this is a good news to be celebrated, some people will obviously try and take advantage of such things for financial gain.

One man in London offered a 92-year old woman, what he called was the coronavirus vaccine. He then used a “dart like implement” to ‘inject’ her and charged her £160 – which he claimed would be refunded by the NHS. London police are appealing to the public for information that may lead to his arrest – as they claim he could injure people if he continues.

We very much hope that anyone defrauding and putting people at risk, like he did, will swiftly be brought to justice.