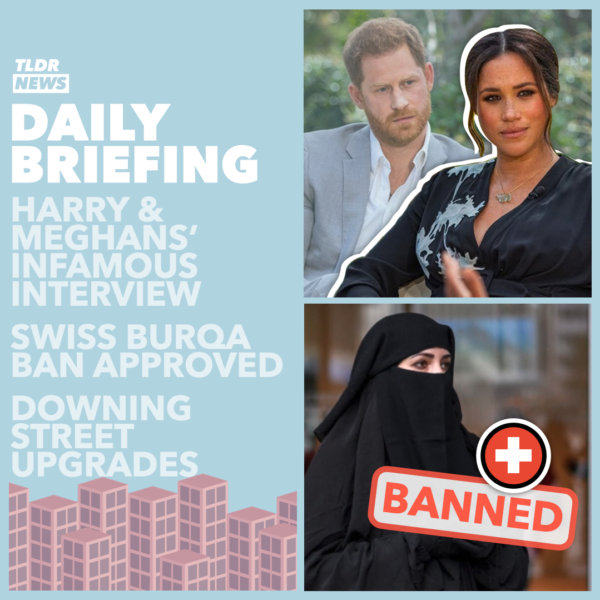 Before we start the Daily Briefing today, we’d just like to wish everyone a happy International Women’s Day (IWD)! It’s important that we all use today to recognise both the achievements and the challenges facing women in 2021. While we’ve made great strides in the last few decades, more work needs to be done – including encouraging people to #ChooseToChallenege and call out inequality.

Here is a link to the IWD website, which features information about this years’ #ChooseToChallenege theme – alongside a bunch of other useful resources.

In the first story today, let’s discuss the story that the British press can’t get enough of the Oprah Winfrey interview with the Duke and Duchess of Sussex (Harry and Meghan). I understand why some people might think that we shouldn’t discuss Royal issues, but this isn’t your standard Royal gossip. The outcome of this debate and the discourse that surrounds it helps to highlight major issues in Britain’s monarchy, politics & media landscape – so no matter whose side you’re on and if you think anything ought to change this truly is consequential for Britain.

It’s clear that while some members of the press were expecting some bombshells, they weren’t expecting the sheer number of bombshells that were dropped across the highly anticipated two-hour special.

What’s perhaps most remarkable here though is the press reaction to this, with many outlets already coming down hard on the couple, especially taking aim at Meghan. This shouldn’t be surprising considering much of this story was drummed up by the tabloids to sell papers, but it’s pretty remarkable how quickly the media have reacted especially considering their profound revelations and Meghan’s remarks about suicide. Something that’s especially incogurus for ITV whose lead morning anchor, Piers Morgan, spread a message surrounding Meghan’s suicidal thoughts seemingly in direct contrast to the pro mental health message the channel’s been attempting to spread in recent months.

Anyway, I’ve probably got too opinionated there but I just find it pretty distasteful when people decide to continue profiting from the monster they’ve made rather than even taking a beat to consider what’s happening and the human impact of it. So I’d encourage everyone, regardless of your views, to keep things respectful in the comments.

For the second story today, we move back to the UK to discuss the Prime Minister’s plans to create a White House-style ‘situation room’. It has been claimed that the renovation will cost £9.3m – which will be used to fit the room with interactive dashboards and heat maps. These will be useful in terror attacks and any future pandemics.

This situation room is set to be announced on the 16th March, and set to be operational by the summer.

Labour have branded the plans for a situation room a ‘vanity project’, and have compared the cash being spent on the aforementioned renovations to the 1% pay increase to NHS workers.

A source told The Independent that “coronavirus has shown that we need this. It will support a greater speed of decision-making” – demonstrating that the government will likely argue that it is not merely a vanity project, but a much needed improvement which will allow the government to better handle crises.

We’ll leave it up to you to decide which interpretation you agree with.

The kind of face-masks they were seeking to outlaw were religious face coverings, such as niqabs and burqas, and face coverings used when protesting, such as ski masks and bandanas.

This referendum was, understandably, quite controversial. Some have criticised the ban for discriminating against religious groups and telling people what they can and cannot wear. Such people would also argue that the referendum comes at a strange time, as most countries are currently telling their citizens to cover their faces.

Others, however, have claimed that “it’s needed to combat what they consider a sign of the oppression of women and to uphold a basic principle that faces should be shown in a free society”.

The referendum itself passed, with 51.26% of voters backing the ban.