Home Daily Briefing September 8th: Another UK Lockdown, a UK Earthquake and the Fly and the Explosion 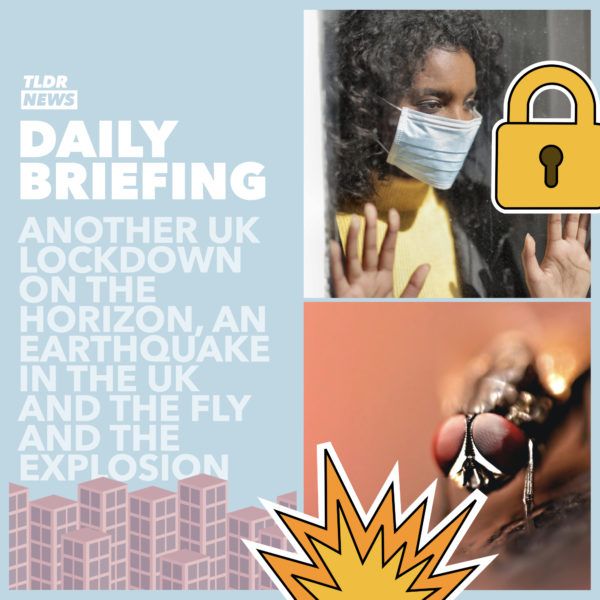 September 8th: Another UK Lockdown, a UK Earthquake and the Fly and the Explosion

The first story in today’s briefing relates to a situation that no one wants – a second lockdown. Ministers have been clear that the government does not want to have to impose a fresh lockdown on a country already weary of the ‘new normal’, but have stated that they will not hesitate to do this if it is necessary. Although we appear to be far off this prospect, it appears we have taken the first steps toward it becoming a necessity. This is because confirmed COVID-19 cases have increased hugely in the UK in the last couple of days, with the seven day average increasing to a huge 2,032.

This has concerned government ministers, who have allegedly begun to plan which rules to make stricter in order to stop this upwards trend continuing. It has been suggested that an announcement on this will be made in the coming days. One expected change is for the limit of people able to meet indoors will be slashed from the current 30 person maximum. It should be noted here, though, that this is the limit over which the police are able to intervene. The guidance from the government currently is that only two households maximum should meet, meaning the only way for someone to follow the rules and get anywhere near this maximum is if both households had in excess of 10 members.

It should be noted though that this is just speculation, and there will likely be more rule changes on top of this.

In other UK news today, residents of the south of England are shaken by an earthquake that occurred at around 8:45 am this morning. Although the quake measured a 3.9 magnitude on the Richter scale, Bedfordshire Police have stated that no major injuries or significant structural damage have been reported.

Some residents have claimed that it felt like the house was experiencing a ‘large explosion’ and ‘like a large convoy of HGVs driving past my front door’.

This earthquake in southern England has gone to show that we really do not know what’s going to happen next in this saga of uncertainty that is 2020.

A Fly Blowing up a House

The next story which is featured in the Daily Briefing today didn’t actually happen today, but instead, over the weekend – for which we can only apologise. But, it is a story we feel should be featured nonetheless.

As summer rolls out, we are having to deal with the last few flies, and other pests, before winter arrives and we can forget about them for another year. Possibly at the end of his tether with such creatures, a man in France has – accidentally – blown up part of his house while trying to swat a fly.

Now, we know this is going to beg a lot of questions. So sit tight. Firstly, no he didn’t use a flamethrower or any other sort of outrageous device. He used an electric fly swatter. Secondly, no he didn’t modify the fly swatter to make it more dangerous. It was, truly, an accident.

The man in question tried to swat the fly with an electric fly swatter, but unfortunately ignited gas which was leaking from a canister. This caused the destruction of the kitchen and part of his roof. Luckily, the man sustained no injuries and is currently staying with family on a campsite while his house is repaired.

It appears that no effort has been made to detect the whereabouts of the fly in question.

We would also like to take the opportunity to wish our very own TLDR News writer, Nelson, a very happy 19th birthday.