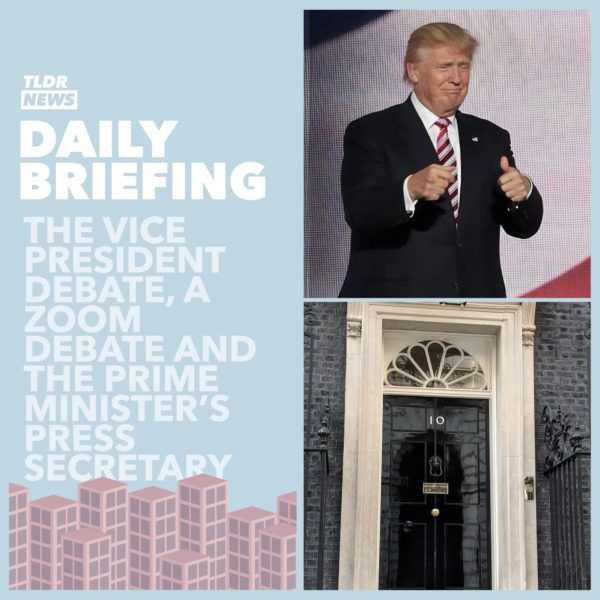 In the first story in the Daily Briefing today, Vice President Mike Pence has gone head to head with his vice-presidential candidate counterpart Kamala Harris. Unlike the presidential debate last week, this one was a lot calmer – with both candidates giving each other a chance to speak without being interrupted after each question. There were a few times when they spoke over each other, but largely, it was an orderly affair.

However, despite the many different topics discussed, the most notable part of the debate was the unfortunate location that an unsuspecting fly chose to sit: on the head of the Vice President. Since the debate ended, the phrase “the fly” has been tweeted over 700,000 times. A picture of former Vice President Joe Biden holding a fly swatter has been liked over 700,000 times also. In fact, his campaign team has registered the domain address flywillvote.com and have started selling fly-swatters on the Biden campaign website – these have already sold out.

It is clear that Biden is taking full advantage of the situation.

In more US news today, it has been announced that the presidential debate next week will take place virtually – meaning that the candidates will be in different locations during the debate. Well, this would be the case if both candidates decided to attend.

Swiftly following the announcement of the virtual debate, President Trump told Fox News that “no I’m not going to waste my time on a virtual debate, that’s not what a debate’s all about… you sit behind a computer and do a debate’s ridiculous. And then they cut you off whenever they want”. He then went on to claim that the virtual debate was designed to benefit Joe Biden.

Whether the President will follow through with his word and not attend the debate is yet to be seen.

In UK news today, it has been announced that Allegra Stratton (a former journalist) will take on the job of the Prime Minister’s press secretary. Earlier in the year, we all became accustomed to the daily updates on coronavirus from No. 10 Downing Street. Well, for those of you who liked them, get ready for a reboot!

Ms. Stratton will lead the briefing, after which journalists can ask questions – similar to the press briefings given in the White House. Although the Prime Minister does have a spokesperson, who is a member of the civil service, the conversations with journalists are not broadcast.

The new system is designed to make the government more publicly accountable, and make the process or journalists asking questions more open.

We will update you on this when the first press briefing happens.