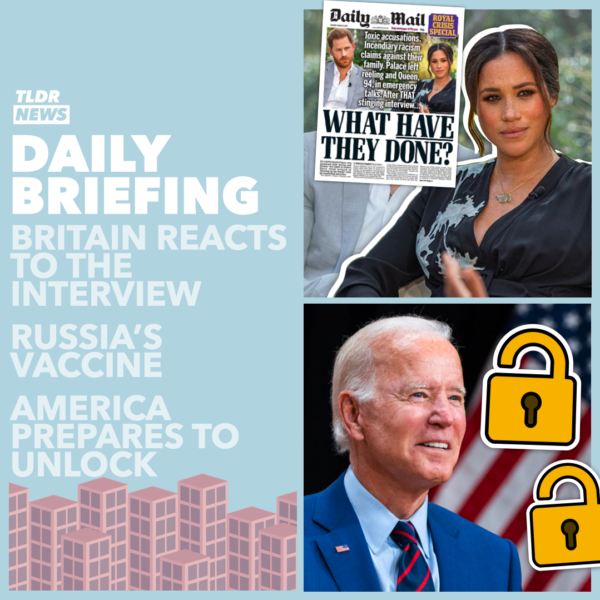 Hey there welcome to the Daily Briefing. Today the British news cycle has been filled with the Royal chaos spilling out from the explosive interview conducted with Harry and Meghan that was broadcast in the UK yesterday evening.

We discussed the revelations of that interview in yesterday’s Daily Briefing and will discuss some of the continuing ramifications at the end of today’s summary but we’re going to try and avoid it for the first 3 stories.

Oh and one more thing, be sure to subscribe to the channel and share with your friends to help us grow and continue the series.

Earlier this month Slovakia became the latest European nation to place an order for Russia’s Sputnik V vaccine – despite not being approved by the EU’s pharmaceutical regulator. In fact, the EMA only began the approval process last Thursday.

This is a trend echoed around the world. According to Daria Litvinova, of AP News:

Regardless, this is seen as a major scientific and diplomatic win for Russia. Their vaccine successfully spreading around the world helps to bolster the countries flagging image. In fact, foreign affairs analyst Vladimir Frolov maybe put it best when remarking:

“The fact that Russia is among five countries that were able to quickly develop a vaccine … allows Moscow to present itself as a high-tech power of knowledge rather than a petrol pump in decline,”

It seems that more difficult times might be ahead with the country massively behind when it comes to manufacturing and distributing these promised vaccines.

As an example, Argentina received 2.5 million doses in the first two months of this year, despite being promised 5 million in January and 14 million in February. It seems that they’re not alone either, and late deliveries like these could certainly damage their reputation.

Considering Russia has agreed to supply an estimated 392 million doses to countries around the world (with talks pending for a further 356 million) it’s pretty worrying that the countries Prime Minister revealed only 20 million have been manufactured total.

So if you’re scheduled to get Sputnik V soon, I wouldn’t hold your breath.

In the second story today, we move to the US to discuss some updated guidance on coronavirus. As we’ve said over the last few briefings, the US is doing particularly well in vaccinating its population. This will be welcomed news from citizens of the UK, who have been promised since the start of the pandemic that vaccines could offer a route out of the dystopian pandemic in which we’re living.

However, despite the good news about the vaccine deployment, Americans have been awaiting an announcement about when exactly the vaccine will allow for a return to normality.

While a return to normality has not yet been announced like it has in the UK, the first few steps towards it have today been announced. The Centre for Disease Control (CDC) have updated their guidance, recommending that vaccinated Americans (those who have received both doses of the vaccine and have waited two weeks) will be able to meet indoors with other vaccinated people without masks or social distancing.

The CDC does accept, though, that there is still a chance that vaccinated people spread the virus. So, whether the rules actually change is, as yet, unknown. We urge all of you to continue to follow the rules wherever you are.

In the third story of the Daily Briefing today, we move to Northern Ireland to discuss a heartwarming story about a boy and a policeman. One particular boy in Northern Ireland had to travel three times a week to Belfast to go on the dialysis machine. Each session took about 4 hours – which, as a young child, is a particularly long time.

The family decided to put an ad in the local paper, appealing for kidney donors. One senior police officer in Northern Ireland, who had previously undergone tests to be a kidney donor, discovered he was a match and decided to donate his kidney.

“I always had it in my mind that if something arose where I could help I will try”. He added, “I just thought ‘that’s perfect for me, it’s a local lad and if I can help I will’.”

To add to this absolutely amazing offer, the police officer has offered to give his police hat, whistle and medallion to the boy when they meet in person after the operation.

We hope that you all agree that this police officer has done something utterly amazing. It goes to show that while the news is plastered in pandemic horror stories – there are still good people in this world doing fantastic things. They just need to be reported on more.

So now we’ve covered the other stories, let’s circle back to the only thing people in Britain are talking about. Before we dive in though, if you did want to escape for a little longer then there’s a whole bunch of stories from around the world in today’s Global Summary.

Now that the Harry and Meghan interview has aired in the UK (and with 12.4 million people having watched it), commentators and the wider public have had the chance to react to what was said.

As we mentioned in the Briefing yesterday, Piers Morgan said on Good Morning Britain that he didn’t believe that Meghan was suicidal. We highlighted that this was in contrast to ITV’s mental health campaign they have been running lately. Well, today, the network has had to respond, with the ITV boss (Carolyn McCall) claiming that they “completely believe” Meghan.

Ms. McCall added that she hasn’t had the chance to speak to Piers herself yet.

In other fallout news, it is also expected that Buckingham Palace will respond to the claims made in the interview today – but as of the time of writing that hasn’t been published.

While Harry’s side of the family have not yet responded, Meghan’s have. Her father, Thomas Markle has stated that “Los Angeles is racist, California is racist. I don’t think Brits are”. He added that the he hopes question asked about Archie’s skin-colour was “just a dumb question”.

Whether this interview will go on to be as famous as Princess Diana’s interview is yet to be seen. We’ll need to keep an eye on exactly if and how this changes the British monarchy going forward.