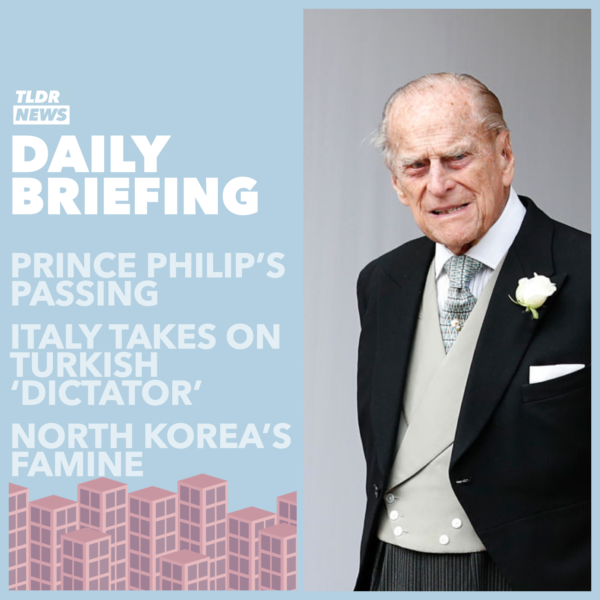 In the first story today, it is with great regret that we have to inform you that Prince Philip has died. Buckingham Palace released the following statement:

“It is with deep sorrow that Her Majesty The Queen has announced the death of her beloved husband, His Royal Highness The Prince Philip, Duke of Edinburgh.”

The Prince will best be remembered by members of the British public for his dry humour and wit in carrying out the duties of the husband of the monarch. In this role, he oversaw changes to the monarchy that enabled it to survive the rapid developments of postwar Britain. One of the most notable of these changes was making it the monarchy more open and accountable to the British public.

Members of the media have been preparing for this very event for a long time. Media presenters have practiced the event by replacing Prince Phillip’s name with “Mr. Robinson”, and have had obituaries prepared for many months, if not years.

Institutions of the British government have also been prepared for this event – using the not-so-secret codename ‘Operation Forth Bridge’. If you want to know more about this, we made a video explaining this plan. It can be found in the description.

Before we move on to the next item, we’d like to point out that our thoughts very much are with all of those affected by Prince Phillips death. We all need to remember that although he was a public figure, he has a family and friends who loved him very much. There will be a lot of people up and down the country grieving today – some of whom knew him, some of whom didn’t. Our thoughts are with everyone who is grieving his loss today.

In the second story of the Daily Briefing today, we move to Wales to discuss the updates in the coronavirus unlocking plan. Due to the devolution arrangement in the United Kingdom, the countries of Wales, Scotland and Northern Ireland are being led through the pandemic by their own governments – separate to the UK government (leading England) based at Westminster. Because of this, they all have their own slight deviations in the unlocking plan set out by Prime Minister Johnson.

For example, while England is set to allow two households to meet indoors (at the earliest) from the 17th May, Wales had planned to allow this from the 10th May. Yesterday, though, the timetable was amended – and was actually moved forward to the 3rd May. While this may sound like a small change (it is only 7 days after all), for all of those families who haven’t seen each other for months, and for all of those people struggling with their mental health at the moment – this is a momentous difference.

After all, many governments across the UK have made big promises that they’ve failed to deliver. Such as, consistently promising not to lock down again, or that the pandemic will be over soon. People have likely come to expect the timetable to be moved back, but certainly not moved forward.

Welsh First Minister Mark Drakeford has said that these changes have been possible due to “improvements” in the public health situation, and that for these new dates to be met, the situation must remain favourable.

There will undoubtedly be people in other parts of the UK hoping that their government also amends the timetable in such a way. Let’s just hope that the coronavirus situation remains favourable in Wales and the rest of the UK, and that we can all start having some freedoms restored as soon as possible.

In the third story today, we move to Turkey to discuss a diplomatic spat. A few days ago, a meeting took place between Turkish President Erdoguan and two heads of the EU: President of the European Commission Ursula Von Der Layen and President of the European Council Charles Michel. In what many are assuming was a pointed gesture, there was only two chairs available to the meeting of three. This caused Von Der Layen to have to sit on a sofa next to Erdoguan and Michel – something that was clearly very awkward.

The diplomatic spat that has been caused as a result seem to have come from a country that was not actually involved in the incident: Italy. The recently appointed technocratic leader Mario Draghi said of the incident:

“I absolutely do not agree with Erdoğan’s behavior towards president Von der Leyen … I think it was not appropriate behavior and I was very sorry for the humiliation Von der Leyen had to suffer.”

“With these, let’s call them what they are – dictators – with whom one nonetheless has to coordinate, one has to be frank when expressing different visions and opinions.”

In reply to these comments, the Turkish Minister of Foreign Affairs said:

“We strongly condemn the appointed Italian prime minister Draghi’s unacceptable, populist discourse and his ugly and unrestrained comments about our elected president,”

This was following the Italian ambassador to Ankara being summoned to the foreign ministry to have Draghi’s comments slammed. Clearly, neither Turkey nor Italy are holding back in their condemnation of the other.

In the fourth story today, we move to North Korea to discuss a possible famine. As we mentioned earlier this week, the North Korean government does love propaganda. The leaders themselves are idealised as gods, to the point that tourists are recommended to not discuss politics at all – in case they inadvertently insult the current, or previous, North Korean rulers.

It is for this reason that we should not really expect Kim Jong-Un to be open and honest about any potential food shortages. However, in a rare display of frankness, the leader told his country that they should expect economic difficulties. He even went as far as comparing the situation to the 1990s famine that his country endured.

It has been suggested that these economic difficulties are the result of the coronavirus pandemic, US-led sanctions and natural disasters. About the economic hardship specifically, Kim Jong-Un said:

“I made up my mind to ask the WPK (Workers’ Party of Korea) organisations at all levels, including its Central Committee and the cell secretaries of the entire party, to wage another more difficult ‘arduous march’ in order to relieve our people of the difficulty, even a little”.

The phrase ‘arduous march’ refers to the 1990s famine, where it is estimated that up to 3 million people died.

While it’s easy to criticise the North Korean regime, it’s important to remember exactly who this economic situation will affect most: the people. We’ll need to keep an eye on the situation to see exactly what (if any) international assistance will be given.

In the last story today, we move to England to discuss herd immunity. While we discussed the implications of the coronavirus rates in Wales earlier, we didn’t really discuss England. Well, modelling conducted by University College London (UCL) revealed that on this coming Monday, 73.4% of English people will have protection from the virus either through a previous infection or a vaccination. This, theoretically, is enough people for herd immunity to kick in, and stop the virus tearing through the population.

We should point out here, though, that this is only one estimate – and an estimate from Imperial College earlier in the week suggested that this figure is only 34%. For this reason, it is vital that we all follow government guidance, and coronavirus laws, to ensure that no one dies from this terrible disease that doesn’t have to.

However, if the UCL estimate is true, then many will be wondering why we have to wait so long for the next stages of the government’s unlocking roadmap. Perhaps caution is the best strategy, or perhaps it is more important to get freedoms restored as quickly as possible.

Which do you think is more important? Let us know in the comments below. And, irrespective of your opinion, make sure you follow all government advice and laws regarding coronavirus.