Home Daily Briefing September 9th: Is Christmas Cancelled, the Incorrect Use of Tests and the CoronaPolice 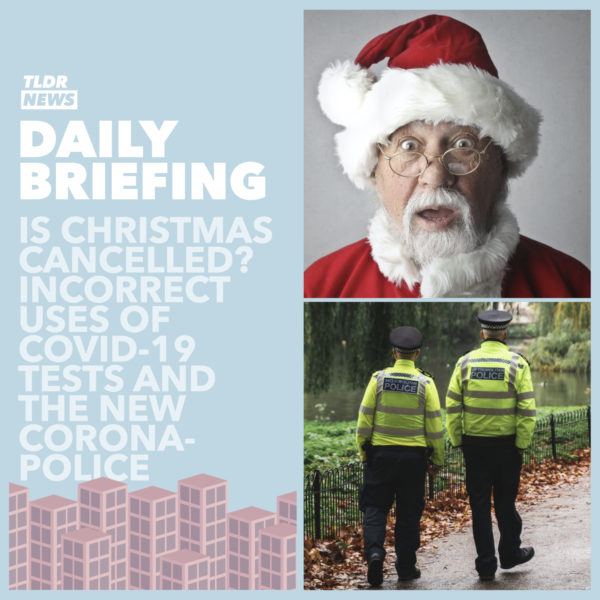 September 9th: Is Christmas Cancelled, the Incorrect Use of Tests and the CoronaPolice

Today’s Daily Briefing is going to be a little bit of a UK special – so I do apologise for those of you who were hoping for some more international news. It is just because so much has happened in the realm of UK coronavirus news today that it feels wrong not to discuss it all.

The first of these big COVID-19 stories is the news that the Prime Minister seems to have let slip a government plan to get the country back to normal. Okay, maybe not a plan, but certainly a situation Johnson wants us to aim for.

During Prime Minister’s Questions today, Prime Minister Johnson stated that he wanted people to take an antigen test every morning, which would be able to tell the user whether they are infectious. In the Downing Street Briefing today, Johnson elaborated, stating that this would effectively mean that people would have a “passport” to interact with others (who are in the same position) in a way similar to before the nightmare that is the coronavirus pandemic.

On the topic of tests, the second story today is about the way in which the current coronavirus tests are being used. If you have frequented a news website in the last few days, you’ll have noticed that many people are being sent, frankly, ridiculous distances simply to get tested.

Although the Leader of the Opposition, Sir. Keir Starmer, has pushed Johnson to explain why in Prime Minister’s Questions today, the government is keen to explain this issue away by stating that some people are using the tests incorrectly. This was pushed by Health Secretary Matt Hancock earlier today, and again by the Prime Minister at the press briefing.

The point the government is making is that some people are getting tests when they do not have symptoms, just to make sure they do not have the virus – for example, on return from holiday. This is, from the government’s point of view, an incorrect use of the tests and a large reason why there is currently a shortage.

Mr. Hancock even pointed out earlier today that a whole year group of a school were sent to get a test – which was another misuse of the testing system.

And in the final news story of today’s briefing, Johnson has again adjusted the rules that those in England must follow. He has stated that this particular rule change is aiming to simplify the rules, as police officers have found the previous rules difficult to enforce. Among the changes is the ‘rule of six’, which is undoubtedly the big one.

This means that both indoors and outdoors there should be no more than six people meeting – except for in very limited and specific circumstances.

In addition to this, Johnson has introduced ‘coronavirus marshalls’, whose job it is to enforce social distancing in city centres. This is on top of the fact that the police now have the power to enforce the ‘rule of six’. There is now not only no excuse, but both legal backing and enforcement to follow the rules set out by government.