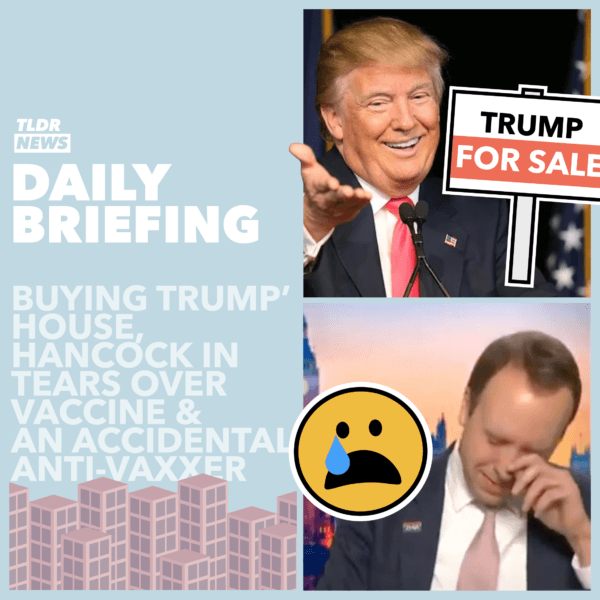 So, when someone leaves a job, it’s fairly normal that family, colleagues or friends may buy a gift for those leaving – maybe a bottle of wine, a novelty mug, or perhaps even an item from the TLDR News Store. But, it’s not awfully common that the leaving present will be the house you lived in as a child (which costs $3m). Well, that’s exactly what some are trying to purchase the for the outgoing president as a gift.

The property sold twice in 2016, following Donald Trump’s move to the White House. Since then, the property has moved into the hands of Paramount Realty, who recently tried to sell it for $3m, without success. Therefore, they have now started a GoFundMe page to try and raise the funds and gift the house to Mr. Trump.

The house is suggested to be worth only a third of what the real estate agent is claiming, but they claim that it’s ‘intangible value’ increases its value. They state that they are therefore more likely to raise the money they are looking for from 1 million Trump fans donating $3 rather than selling the property to a single buyer.

The fundraiser has currently reached $105.

In the second story in the Daily Briefing today, we talk about anti-vaxxers. Well, more specifically, we discuss a woman who was used, without her knowing or agreeing, as an argument against the current coronavirus vaccines.

The woman in question is Patricia, from Texas. She is currently suffering from an unexplained skin condition, which has caused purple and red sores to appear on her foot. While it is true that she has been a participant in the coronavirus vaccine trials, it turned out that she was actually given the placebo. This is an injection of salt water.

What we’re saying is – although some have tried to link her condition to the vaccine, the reality is, she has not been given a vaccine at all for the coronavirus. This, though, has not stopped people online trying to use her condition to warn others against taking vaccines.

Many anti-vaxx groups used her post on social media about her condition, and the fact she was trialling the coronavirus vaccine. The image of her foot has been posted alongside comments like “supposedly this is a vaccine trial participant. Ready to roll up your sleeve?”.

This should demonstrate the ability for fake news to spread online, and the importance that we all check out the provenance of posts before believing them.

If you want to learn more about the safety of the new COVID vaccine then be sure to check out our video on the topic, it’s linked in the description.

In the third story of the Daily Briefing, we move to the UK to discuss the Health and Social Care Secretary Matt Hancock. While the word ‘tiers’ has been used frequently lately in news headlines (and, we admit, Daily Briefings) as a pun on the word ‘tears’, we have now been given an opportunity to make a pun the other way around.

That’s because, yesterday, when discussing the first two people to receive the vaccine, Matt Hancock started tearing up. Specifically, he started to cry a little when he heard the words of William Shakespeare (the second person in the UK to be vaccinated). Specifically, Hancock said:

“It’s just that it’s been – you know, it’s been such a tough year for so many people and there’s William Shakespeare putting it so simply for everybody, that we can get on with our lives”.

This has prompted “And the Oscar”, presumably referring to the phrase “And the Oscar goes to”, to trend on Twitter. Clearly, this display of emotion from Mr. Hancock has led to questions from people online about the true motive of the outbreak. Many clearly don’t believe that his emotion is genuine, and was used to highlight the success of the government.

This may be too harsh though. At the end of the day, the government (including Mr. Hancock) are human. They worry, they stress and they feel emotion about this the same as everyone else. They also have to see, on a daily basis, the impact that the virus (and the restrictions) are having on peoples’ lives and livelihoods. Perhaps Twitter was a bit harsh.

Or, maybe they weren’t, maybe it was a calculated political move. Let us know your thoughts in the comments below.