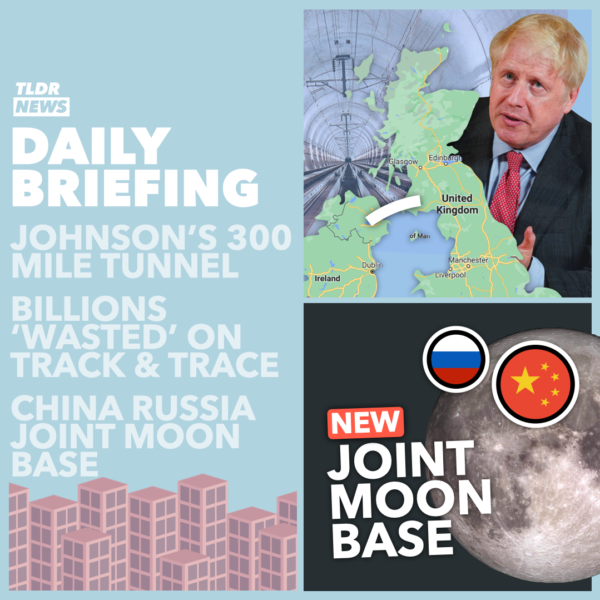 In the first story of the Daily Briefing today, we stay in the UK to discuss the proposed Northern Ireland tunnel. If you’re a regular viewer of the TLDR News UK channel, then you’ll know we’ve already done a full video on this.

For those of you who haven’t seen this video, though, Prime Minister Boris Johnson has proposed a plan to create a tunnel, similar to that of the Eurotunnel, between the mainland United Kingdom and Northern Ireland.

Today, it has been revealed that a study looking into the feasibility of the plan has officially been commissioned. This will be led by Prof Douglas Oakervee, who has previously worked as the chairman of both the HS2 project and Crossrail and Prof Gordon Masterton, who was the president of the Institution of Civil Engineers. It is expected that this report will be completed by summer this year – so it might not be long until we find out if this project actually has legs.

This tunnel idea should come as no surprise to anyone who knows about Prime Minister Johnson’s past plans. He seems keen to embark on big infrastructure projects – just look at the garden bridge he proposed as London mayor. He has also become an advocate for making politics less London-centric. Again, look at the supposed plans to move the House of Lords to York.

However, these two ideas don’t bode well for the Northern Ireland tunnel – neither ended up actually happening. We’ll have to keep a close eye on the feasibility report, and see whether this project is going to be more successful.

The Expense of Test and Trace

In the second story today, we stay in the UK to discuss another big UK project: NHS Test and Trace. One of the things the UK government was criticised for early in the pandemic was the lack of widespread testing.

An effort was made by the government to overcome this criticism, and improve the NHS Test and Trace system. They pumped a lot of money into it – at the time of writing, more than £37bn of it – with the aim of improving it to the point that it is able to stop the need for future lockdowns.

Today, MPs from the Public Accounts Committee (PAC), who have been scrutinising the effectiveness and value for money offered by NHS Test and Trace. They were quite scathing about it, though, warning that the taxpayer couldn’t be “treated like an ATM machine”.

The Public Accounts Committee is a select committee of MPs from the major parties, who scrutinise public spending, so this is a non-partisan attack.

They added that there was an over-reliance on consultants (some of whom were paid £6,600 a day); a failure to cope with the September surge in testing demands; only half of tracers’ time actually being used; a huge amount spent on rapid test kits without evidence that they will help; and the fact that they have never met the target for all tests to be returned within 24 hours.

In fact, there were many stories in frontline news last year about tracers not having any work to do for multiple days in a row, with them effectively being paid to watch Netflix.

The chairwoman of the committee, Meg Hillier, said that it was hard to identify a “measurable difference” made by NHS Test and Trace – especially when it had failed on it’s chief goal of avoiding a future lockdown, not once but twice.

In defence of the system, though, the Transport Secretary Grant Shapps pointed out that it was NHS Test and Trace that has identified the South Aftrican and Brazilian coronavirus variants and has stopped them spreading across the country.

Now, before anyone calls us out for bias here – like we often are, in the comments, when we raise news stories where the government is held to account –  we would include such stories no matter who was in charge. As an outlet that aims to update you on the politics of the day, it would be disingenuous to avoid topics that critique the government. We’re not a spokesperson for the government – our job, alongside other news outlets, is to highlight criticisms of the government to the public.

We always include the governments’ side too, and allow you to make up your own mind about whether the criticism is fair.

China and Russia’s Moon Base

In the third story of the Daily Briefing today, we move to both China and Russia to discuss plans for a joint moon-base. If your lockdown life wasn’t already full of news about space – following the Mars rover landing and the multiple SpaceX launches – then you’re in luck today!

Both China and Russia have stated today that they have plans to work together to create the International Scientific Lunar Station, which will be available for use by other nations. It has not yet been announced exactly when this lunar station will be operational, but it’s hard to see this as anything other than direct competition with NASA’s plan to have another crewed lunar trip by 2024 and persistent human presence by 2028.

Whether it is or isn’t aiming to compete with NASA, for all the fans of space exploration, this will come as welcomed news. After all, who isn’t excited to see another moon landing!

In the final story today, we bring you some good news. Yesterday, we included a story about a child in Northern Ireland who has been offered a kidney which he desperately needs from a local police officer. The comments about it’s inclusion were overwhelmingly positive – so, we’ll try to include positive stories more often. After all, the news is so tough at the moment – and with many of us still stuck in lockdowns, it can only be a good thing to hear about something uplifting each day.

The story we have decided to include relates to a UPS driver in Pennsylvania. It’s fairly obvious that those in the delivery sector are likely working harder than ever in the pandemic – with people being forced to purchase non-essential items online.

Delivery drivers, though, have risen to the challenge. One in particular, Chad Turns, has not only been able to manage the work-load, but do so while being incredibly thoughtful about those who he is delivering to.

It has been reported that he often leaves treats when delivering to a house with a dog, and on one occasion came back after his shift to ensure that a package that was intended as a gift wasn’t noticed by the kids playing out front. Many in his local community noticed his many small acts of kindness, and decided to repay him.

They raised $1,000 for him, and presented it to him alongside a big signed card and many balloons. Many of the locals clapped and yelled “thank you, Chad!” as he received the gift. This was clearly a powerful moment for him, as he was moved to tears.

About the gift, he said: “I’m still overwhelmed and it is touching that this community feels so strongly about me”.

We’d just like to end by saying a big thank you to all the delivery drivers working hard to ensure that we all get our deliveries swiftly and safely. Your hard work isn’t going unnoticed.