Home Daily Briefing August 10th: An Apology from a Politician, the Belarus Election and the Arrest of a Media Tycoon 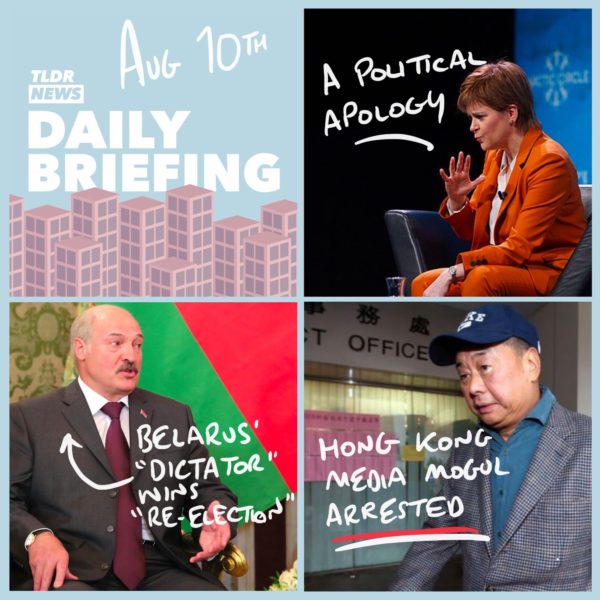 August 10th: An Apology from a Politician, the Belarus Election and the Arrest of a Media Tycoon

An Apology from a Politician

We will start today’s Daily Briefing with something that very rarely happens in politics – an apology. This apology comes from the First Minister of Scotland, Nicola Sturgeon, in relation to the exam grades published by the Scottish Qualifications Authority.

This comes after 125,000 pupils had their exam grades lowered. The Scottish government, similar to the English government, relied on predictions from teachers in order to estimate grades for pupils this year, in light of the fact that exams cannot take place due to the coronavirus pandemic. The exam board found that a lot of these predictions were too high, and would mean that if they remained unchanged, this year’s grades would struggle to have the legitimacy of other years.

Sturgeon has publicly apologised for the lowering of grades, has stated that the burden would not be on pupils to change their grades, and that she would announce how this issue will be fixed tomorrow.

In other news, the results of the election in Belarus have been announced. As expected, President Lukashenko has been successful in retaining power. It appears, though, that his win was far from legitimate. According to the electoral commission of the country, Lukashenko won 80.23% of the vote. This was after members of staff for his main opposition was arrested only days before the election.

There has also been reports of widespread ballot stuffing, due to no outside observers being allowed to watch the vote counting take place.

The election has also been criticised by Ursula von der Leyen, the President of the European Commission, because of the use of tear gas and rubber bullets against people peacefully protesting against the government. She said “harassment and violent repression of peaceful protesters has no place in Europe”.

The Arrest of a Media Tycoon

In more global news, Jimmy Lai (the head of a media tycoon in Hong Kong) has been arrested, alongside others, for allegations of collusion with foreign forces. The Hong Kong authorities have criticised him and his newspaper for “inciting hatred, spreading rumours and smearing Hong Kong authorities and the mainland for years”.

This comes after the passing of the security law in Hong Kong that has already caused tension between China and the UK and fear that freedom of speech would become a thing of the past in Hong Kong.

The arrest of the head of a newspaper that criticises the government and promotes democracy will certainly anger pro-democracy protesters and those that oppose the security law.

We are yet to see the international reaction and whether this will increase tension between China and the US or UK.