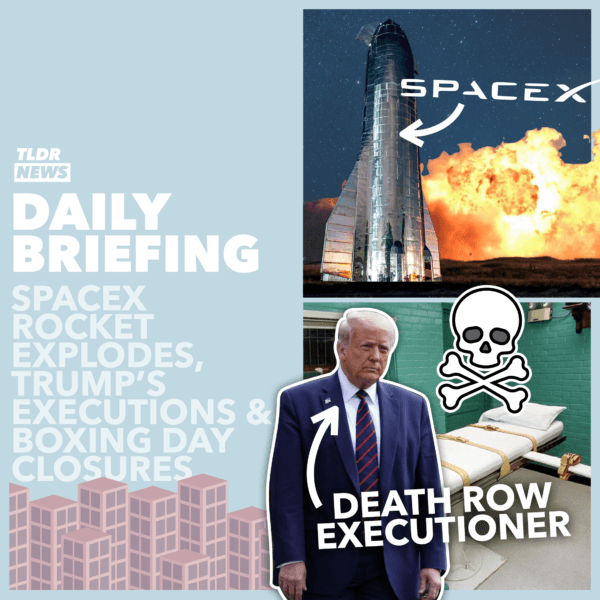 In the first story today, we discuss the tricky subject of federal executions. Mr. Trump has been branded (and, on some occasions, branded himself) a “law and order president” and while this has been clear in some of his policies, it is no clearer than in his approach to executions.

In order to properly understand this story, we need to explain a little about what federal executions are. So, while only 28 states in the US permit the use of the death penalty, the US government retains the right to sentence people to death – even if the crime was committed in a state where the death penalty is not legal. This is because federal criminal law is the same across the country regardless of state.

However, the US government has very rarely actually used this power. Since 1988, and before Trump took office, only three individuals have been sentenced to federal execution (and all of these took place under a Republican president – George W. Bush).

So, moving to the present, it seems that the president is aiming to ensure that federal executions take place – especially in the wake of a Biden presidency. President Trump has already overseen 13 executions since July this year. There are currently 5 inmates on death row, set to be executed before Biden takes office.

Traditionally, a president in Trump’s position would commute the sentences, in order to allow the newly elected president to make the decision of whether or not to move ahead with the execution. However, breaking with this convention, Mr. Trump appears to be trying to push through the executions before Biden takes office. In effect, he is breaking a 130 year old convention.

One possible reason that the President is trying to ensure these executions take place, and become a president that has overseen more executions than almost any other, could be because he has been a firm believer in the death penalty whereas Mr. Biden’s team has largely been opposed. This, alongside the commitment from Mr. Biden to try and end the death penalty, could be the motivation behind Trump’s insistence that the executions take place before Biden moves into the White House.

We’ll have to see exactly what happens, and whether Mr. Trump’s team is able to put these people to death.

In the second story in the Daily Briefing today, we talk about SpaceX. For those of you who don’t know, SpaceX is a company founded by Elon Musk which aims to send people to the moon and Mars.

As part of this mission, they need to test their rockets – in order to collect data and fine tune them before they put people in them. So, whenever they have any of these tests, the company decides to livestream them. This is what happened last night, with their ‘Starship’ prototype.

The aim is for this to be used to carry humans, alongside 100 tonnes of cargo, to Mars. The test yesterday planned to reach an altitude of 41,000 feet before beginning it’s descent.

It is unclear whether it reached this target altitude. However, it was clear that it’s descent was pretty spectacular – and not in a good way. The rocket crash landed, exploding on impact. There was no-one inside, so no one was hurt.

Despite this, Elon Musk called the test a success – claiming that they gathered all the data they needed. When discussing the crash itself, he claimed that the “fuel header tank pressure was low” which ended up “causing touchdown velocity to be high”.

Let’s hope they sort this problem out before the next test!

They have worked hard to ensure that we all are able to essential items throughout the year, irrespective of what restrictions have been put in place. They have often had to put up with customers who are frustrated with guidelines that have been put in place to protect those in their shops, and have done so without much praise or attention.

Well, before starting this story, we thought it right to offer our sincere thanks and praise to all of those who work in essential retail – whether you’re a shop floor worker, a delivery driver, someone who restocks the shelves, a line manager or anything else at all. You’ve done an exceptional job.

Okay, so while thanks is good, it isn’t as good as something tangible – like days off or extra pay. While we here at TLDR News are not able to actually offer anything more than thanks, those in charge of supermarkets are. That’s why unions are pushing for supermarkets to give their staff the day off on Boxing Day. This is usually a very busy day for supermarkets, but campaigners claim that this day off would serve as a ‘thank you’ to retail workers.

So far, Sainsburys has already denied the push – claiming that they will be open as normal on Boxing Day. We’ll have to see if any other supermarkets will agree with unions or do the same as Sainsburys and open as normal.