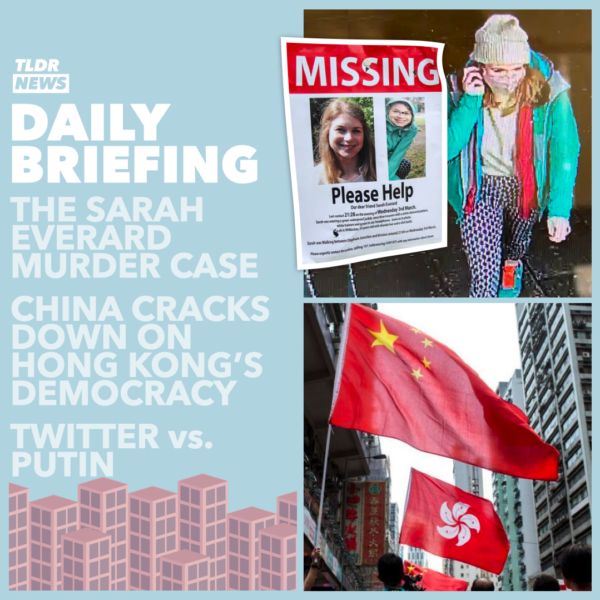 In the first story of the Daily Briefing today, we stay in the UK to discuss the updates regarding the Sarah Everard murder case. The UK has been shaken over the last few days about this case but for those of you outside the UK, it was reported that on the 3rd of March, a woman in her 30s had gone missing. Sarah was last seen while walking home from a friends house in the Clapham area of South London. She left the friends house at around 9pm, it’s then believed that she crossed Clapham Common and was then seen by CCTV on a main road at 930pm.

Sarah worked in marketing and had not given her family any reason for concern in the prior weeks – so when she disappeared her family were “desperately worried”. Social media was then set alight by people trying to find her, asking people to share any information, any potential sightings.

Unfortunately, in the last day or so, it has been reported that unidentified human remains have been found in a woodland in Kent – with police linking this body to Sarah’s disappearance.

Even more shockingly a  MET police officer, PC Wayne Couzens, has been arrested on suspicion of murder. Mr. Couzens is married and has two children and also lives in Kent. Little is publicly known about his potential involvement at the moment but his link to the killing has shocked the country.

Sparked from this shock, many have raised the issue of girls and women being able to feel safe on our streets – and have highlighted the work that still needs to be done to ensure this is the case. Many have bravely spoken out about their experiences to highlight quite how unsafe many women feel as well as telling their own personal stories.

A vigil has been organised tonight to “reclaim these streets”. Attendees have been urged to bring a light to “remember those we’ve lost”.

Our thoughts are with the family and friends of Sarah Everard today – and we hope that whoever committed the act of evil against her will swiftly be brought to justice.

In the second story today, we move to Hong Kong to discuss the new election law. As anyone who follows the Daily Briefing will know, tensions have risen dramatically in the last year in relation to Hong Kong’s political system. That’s because China has been trying to increasingly integrate the city and as part of that they’ve been limiting the freedom of speech and journalistic freedoms in Hong Kong – action countries like the UK and US have spoken out against.

Today, China has gone further though introducing new election laws which will decrease the proportion of democratically elected lawmakers in Hong Kong.

The 1984 Sino-British Joint Declaration makes clear how Hong Kong should be treated following its decolonisation in 1997. The UK is set to review the latest election law soon, checking to see whether the declaration has been broken. So far, it seems likely that the UK will hit back.

Foreign Secretary Dominic Raab has said that this  “latest step by Beijing to hollow out the space for democratic debate in Hong Kong, contrary to the promises made by China itself”. Exactly how the US will respond is, as yet, unknown.

In the third story today, we move to Russia to discuss the attempt to limit access to Twitter. This supposedly follows an argument between the government and the social media company about the platform’s refusal to delete content. The Russian watchdog has threatened to half the loading speed to the site if Twitter don’t delete more than 3,000 posts from 2017 onwards that “encourage underage suicide and contain child pornography as well as information about drug use”.

Some are suspicious, though, that this may simply be the first attempt at closing a social media site that has aided the Russian Opposition leader Alexei Navalny in holding President Putin to account.

Twitter has made clear that it has a zero-tolerance approach to child sexual exploitation, anything that promotes self-harm and any unlawful behaviour such as buying and selling drugs – so it seems that there might be a deeper Russian agenda at play here.

In the final story of the Daily Briefing today, we discuss a video game. Don’t worry, we won’t cover these stories too often – but this one we thought was pretty interesting.

Some of you may be aware of a game called Rust. It was originally only available on Steam, but has more recently branched out to consoles. The game is played online, and is effectively a survival game. The player must build a base and try and defend themselves from raids from other plays, which can happen even when they’re offline.

As the game is based on players building and defending bases, player data is vitally important. This is rather unfortunate, as yesterday a huge fire destroyed the servers that hosted the online game. In a Tweet, the game’s developer Facepunch said:

“We’ve confirmed a total loss of the affected EU servers during the OVH data centre fire. We’re now exploring replacing the affected servers. Data will be unable to be restored.”

Therefore, players who were playing on these servers have had their progress wiped. Luckily, though, no staff were injured during the fire.

Let this serve as a reminder to everyone watching today to always make backups.