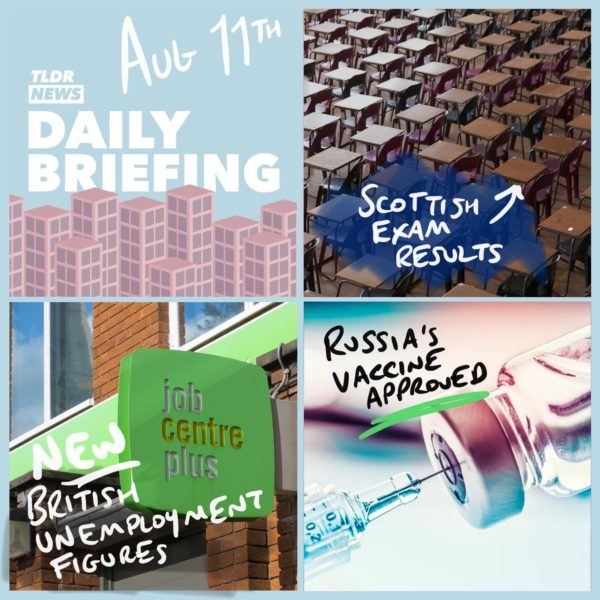 August 11th: Scottish Exam Results, Unemployment in the UK and The Russian Vaccine

Today’s Daily Briefing will start with an update on a story we reported yesterday. Following an apology from Scottish First Minister Nicola Sturgeon, the Scottish Education Secretary John Swinney has announced that the 125,000 exam grades that had been downgraded will be reversed.

The reason they were originally reversed was because of concerns of grade inflation. As teachers set grades for pupils based on estimates, there was an increase in higher grades and an increase in the proportion of people that passed this year.

This is still a concern, with the Scottish government claiming that this years’ pupils may “have an advantage” over pupils from other years. They have, however, claimed that over-inflation is out-weighed by a concern that people from working-class backgrounds may feel that the system works against them and they may “lose faith” in the system.

All eyes are now on England. While students await the publication of GCSEs and A-Levels, questions will invariably be asked about comparability with Scottish results. If over-inflation is an issue with results in England too, then the Education Secretary will either have to do the same as Scotland and not lower them, or grades will be lowered causing a disparity between Scottish and English results. This may make it difficult for universities to compare candidates applying for places.

We will update you when these results are published, and what decision is made.

Unemployment in the UK

In other news, the UK employment figures have been published today. While it should come as no surprise that unemployment is particularly high at the moment, with the coronavirus crippling the economy, unemployment isn’t as high as originally predicted. This is likely due to the furloughing scheme that the government has introduced.

Having said that, unemployment has jumped 220,000 in the last quarter, which is the largest jump in the number of unemployed in over a decade. The ONS has claimed that the young, the old and manual workers have been the hardest hit.

It should also be noted that those on zero-hour contracts, those who have been furloughed and those who are on temporary unpaid leave are not counted in the figures. If they were, the figures may be much higher. Consider those that are being furloughed – they account for nearly 10 million people just on their own.

With Prime Minister Johnson touting November as a possible month when social distancing advice could be dropped entirely, it is possible that businesses may take more employees on. However, it is also possible that social distancing advice isn’t dropped due to a resurgence in cases, or even if it is that businesses cannot return to the pre-pandemic levels of staffing. Whether employment will recover later in the year is a big unknown as of yet. We will bring you more on this when more information is available.

In global news today, President Vladimir Putin has announced that the Russian vaccine has been successfully developed and is ready for mass Russian vaccinations to take place in October. This means that human testing of the vaccine has taken less than two months.

This has prompted officials to raise questions about safety. However, Putin has already tried to alleviate such concerns, by stating that his daughter has already been given the vaccine.

This follows the race between nations to try and the first to produce a safe, effective vaccine that provides some level of protection against the new novel coronavirus. Russia has already made the comparison of this race to find a vaccine and the space race by naming the vaccine Sputnik V.

October will show whether this vaccine is safe and effective and whether mass vaccination allows a society to go back to normal. We will be sure to report on this either in the Daily Briefing or as a standalone video.