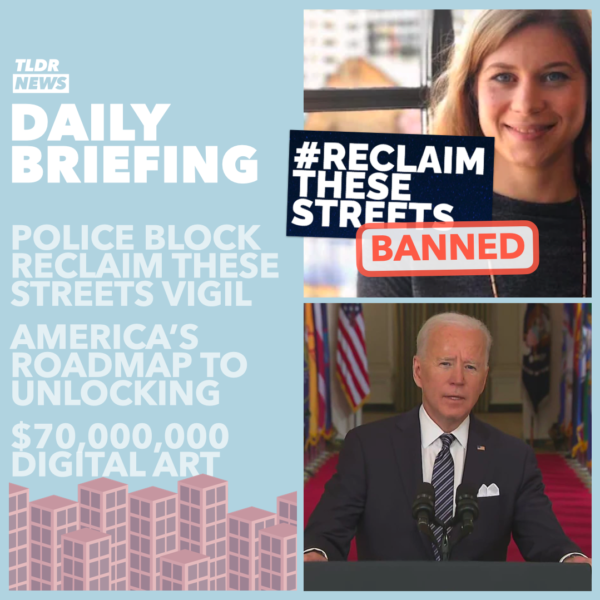 In the first story of the Daily Briefing today, we’re going to discuss a planned vigil. Yesterday, we discussed the horrific, and tragic, news of the disappearance (and possible murder) of Sarah Everard. This case has shook the UK to its core, sparking conversations about how to make women feel more safe when walking on the street. After all, Ms. Everard was walking home when she disappeared – prompting many women to question whether it could happen to them too.

Many have wanted to channel this anger, frustration and sadness into something. This is why some have organised a vigil for Ms. Everard on Saturday – taking place at many different cities around the UK, but with the main event taking place on Clapham Common, near to where Ms. Everard went missing. It is appropriately called “Reclaim These Streets”.

The central event in this vigil is the minute of silence.

However, this event – and the whole vigil itself – may not be allowed to happen. After announcing the event, the Metropolitan Police have stated that the gathering would be unlawful. This has caused backlash not only from the public, but from some politicians. It has also prompted the organisers to take the Metropolitan Police to the High Court.

Last year, police turned a blind eye to the Black Lives Matter movement as well as various protests from the right. This protest, too, was likely unlawful in relation to the coronavirus restrictions. Some are hoping that the police will do the same in relation to this vigil.

Some have gone further. Caroline Nokes, Conservative former minister and chair of the women and equalities committee told The Telegraph: “Of course the vigil should be allowed to go ahead. It can be done socially-distanced, with great care.  The Home Secretary needs to step in, recognise the gravity of this crime and the way it has made people feel. She then needs to tell the Met Police to allow it to go ahead, so that all who want to share their thoughts for Sarah Everard and their concerns about their own safety can do so.”

At the time of writing, no statement has been made by either the Home Secretary or the government.

In the second story today, we move to the US to discuss the potential coronavirus unlocking timetable. On the one year anniversary of coronavirus being classified as a pandemic, President Biden made a speech to the US updating the public on the progress made with vaccinations and the plans to unlock.

He made clear that when he came to office, only 8% of those over 65 had gotten their first vaccination, and that now over 65% had. He added that this meant that grandparents who had not been able to hug their grandchildren are now able to do so.

Mr. Biden added that his goal to issue 100m vaccinations in his first 100 days will be beaten, with this target being hit on his 60th day as President. This allowed him to make the promise that all eligible adults would be offered their first dose of the vaccine by the 1st May. This is significantly earlier than the UK, who aims to offer all adults a vaccine by the end of July – nearly three months after the US.

If this all goes to plan, then President Biden has stated that the 4th of July would mark “independence day” from the virus. He stated that this would allow people to “get together in your backyard or in your neighbourhood and have a cookout or a barbecue and celebrate Independence Day”.

For this to happen, though, it is important for everyone to continue social distancing, continue to wear masks and continue to wash your hand frequently – but what a morale boost that could be for the US and Biden’s young administration.

If you want more US stories like this one you ought to check out the TLDR US channel. Over there we do full breakdowns of American news stories, including a recent video on the debate around minimum wage and why the US minimum is so low.

In the third story of the Daily Briefing today, we discuss digital art. Don’t worry, we’re not going to review it or anything – quite frankly, I’m not sure there’s much we could intelligently say about art generally. The art in question is entitled “Everydays: The First 5,000 Days”, which features 5,000 individual images digitally stitched together. The artist Mike Winkelmann stitched one additional image to the artwork each day since May 2007.

Now, you might be starting to wonder exactly how a digital artwork could be sold. After all, if it’s just an image file, what exactly was purchased? Does anyone who displays the image owe the artist the same amount?

Well, no. The individual who bought the artwork bought it alongside something known as a “non-fungible token” or NFT. Before we explain exactly what this is and how it works, allow us first to explain why there is precedent for this in the real world.

Some of you may remember the banana gaffa-taped to a wall (called Comedian) selling for $120,000 in Miami in 2019. You may also remember that another artist ate the banana. Your first thought may have been “damn, he just ate a $120,000 banana”.

Well, same here. And as it turns out, we were both wrong. This is because the $120,000 wasn’t for the 30 cent banana and the few inches of gaffa tape – it was for the letter of authenticity, claiming that whoever owned it could replace the banana and gaffa tape, and as a result, still own the art. Anyone can tape a banana on a wall, but only three people can claim to own the artwork.

This is the same principle with the digital art sold today. The individual who bought it bought the non-fungible token – which records the purchase on a digital ledger, also known as a blockchain. This is effectively so things that can be duplicated, such as digital art, can be verifiably owned by someone.

It doesn’t even have to just be art. An NFT was used to sell the first tweet on Twitter only the other week. This sold for $2.5m. YouTubers have also got in on the act with Logan Paul also making millions from NFTs in recent weeks.

What do you think though? Is this the next step in collectable artwork and a natural progression from abstract art such as Comedian, or is it just another way for rich people to waste money?

In the final story today, we move to Texas and Mississippi to discuss the coronavirus relaxation. On Tuesday this week, it was announced by the governors of the two aforementioned states that mask mandates would be lifted and businesses would be allowed to reopen.

This has been met with frustration by politicians and scientists alike. As we mentioned earlier in the briefing, US President Joe Biden has not yet encouraged states to unlock. About the sharp divergence of the advice from Mississippi and Texas from that of the federal government, President Biden said: “I think it’s a big mistake”.

Dr. Anthony Fauci seemed to agree, stating: “I don’t know why they’re doing it, but it certainly from a public health standpoint is ill advised”. He added that “It is just inexplicable why you would want to pull back now”.

We’ll have to keep a close eye on whether this dramatically affects case numbers.