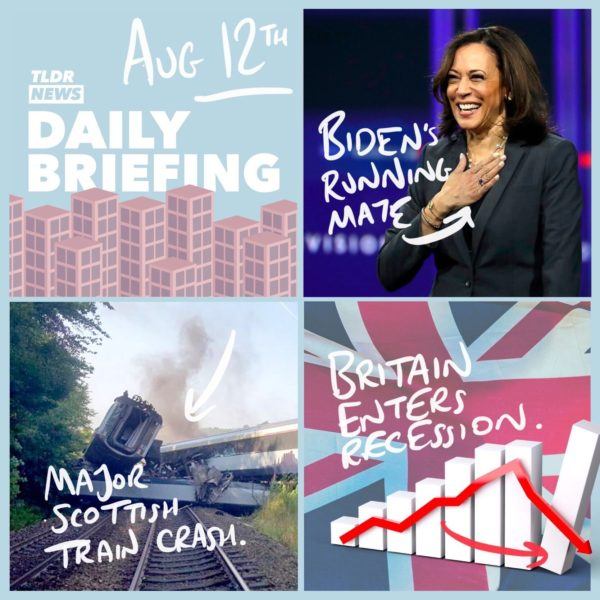 A Crash in Stonehaven

We start the Daily Briefing today with sad news that a train has derailed in Scotland following storms that occurred. These storms have caused landslips in the area, which are believed to have caused the train to derail.

At the time of writing, 30 emergency vehicles have been sent to the scene which include air ambulances. First Minister of Scotland, Nicola Sturgeon, has called it an “extremely serious incident”. Prime Minister Johnson has said that his thoughts are with “all those affected”.

The Chief Executive of Network Rail, Andrew Haines, has said he will be cutting his family holiday short in order to come back to the UK and investigate the incident.

So far, three have been confirmed dead, including the driver. Unfortunately, no more information is available. We do not yet know how many have been injured.

In other UK news today, it has been announced that the UK is now in a recession, after the largest decrease in the size of the economy on record. Compared to the first quarter, the UK has seen the economy shrink a huge 20.4%.

It goes without saying, but we’re going to say it anyway – this is undoubtedly due to the coronavirus and the lockdown that was put in place. As large sectors of the economy were instructed to close to stop the spread of the disease, the size of the economy began to shrink.

Exactly how we will recover from this and what policies will be introduced to further incentivise growth (in addition to the Eat Out to Help Out scheme) is yet to be seen.

In US news today, Kamala Harris has been selected as the running mate of Joe Biden – the presumptive presidential candidate for the Democratic Party. Harris has been one of the favourites to be Biden’s running mate, along with Susan Rice, Karen Bass, and others. While questions are arising about Harris’s prosecutorial record while she was a district attorney and Attorney General of California, her progressive positions could balance Biden’s moderate viewpoints and be an olive branch to the progressive wing of the party.

Harris also makes the first African American woman, the first Indian American, and only the 4th woman (following Geraldine Ferarro in 1984, Sarah Palin in 2008, and Hillary Clinton in 2016) to be nominated for President or Vice President on a major party ticket.

The Protests in Belarus

Following the re-election of President Lukashenko earlier this week, Belarusians have taken to the street to protest in what they see as his autocratic leadership and vote rigging. More than 6,000 protestors have been arrested and opposition leaders have been either jailed or fled the country.

It has even gone so far that people have begged police for information on details of protestors who went missing when protesting.

The main opposition candidate who opposed President Lukashenko in the election (Sviatlana Tsikhanouskaya) has fled the country, claiming that threats were made against her children. As you can imagine, we here at TLDR News are appalled at the way the Lukashenko regime has acted, and we hope to continue to update you on what has been happening in Belarus.

It is important that we are informed on how democracy is being degraded and where elections are being rigged – so that we can oppose these acts. That is why we will continue to discuss Belarus in the Daily Briefing.