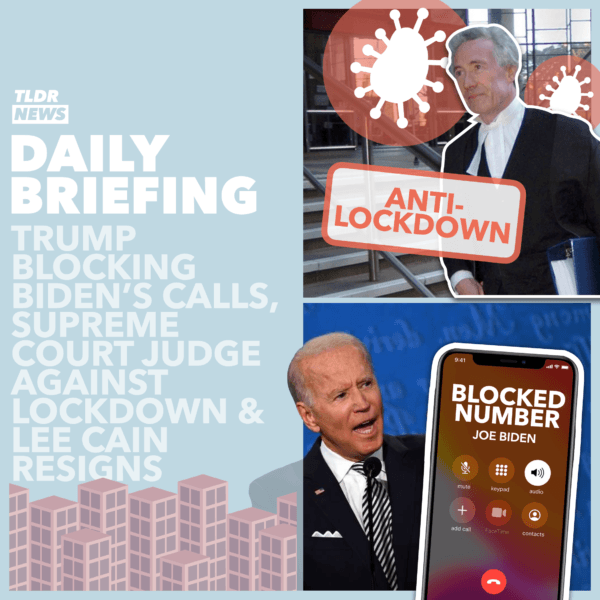 The Senior Judge Against Lockdown

In the first story in the Daily Briefing today, we discuss the views of a former UK Supreme Court Senior Judge – Lord Sumption. While the UK has been plunged into another national lockdown, with the aim of stopping the spread of the virus, some have been keen to look at the negatives of doing so.

One particular event last week caught the attention of the former Senior Judge. Following months of not being able to see her mother, Ylenia Angeli attempted to take her 97 year old mother out of her care home. Despite her having dementia, the police argued that she should remain in the care home. As a result, Ylenia was arrested and her mother returned. This prompted outrage online of the “heavy handed” approach taken by the police. Although the government admits that it was ‘destressing’, they refused to criticise the police’s approach.

As a result, Lord Sumption has claimed that the lockdown “leaves no place for common sense or individual judgement”. Specifically, he backs this up by claiming that The Alzheimers Society has shown that people with alzheimers and dementia deteriorate very quickly when they do not have support from family and friends. Therefore, the lack of contact they are having is leaving them with a far worsened quality of life due to their deterioration as a result of coronavirus rules. He even goes as far as saying that, while coronavirus may be very dangerous to such people, “the quality of the last few months left to them matter more than the quantity”.

This is a particularly controversial opinion. But, does what he says have merit? Are older people suffering more as a result of the coronavirus restrictions than the virus itself? Should the government implement rules that allow for more common sense judgements? Or, are the restrictions fit for purpose, and would the current restrictions save more lives than if they were relaxed?

In more UK news today, it has been announced that Lee Cain, the Prime Minister’s director of communications, has resigned. This comes after a bitter dispute in No. 10 over his promotion to chief of staff. Mr. Cain was a key ally of the Prime Minister’s right hand man, Dominic Cummings.

Both the Prime Minister’s fiance (Carrie Symonds) and the newly appointed press secretary (Allegra Stratton) were against the promotions, claiming that he was ‘abrasive’. Johnson ended up siding with both Ms. Symonds and Ms. Stratton, and accepted Mr. Cain’s resignation.

This has left Dominic Cummings particularly unhappy. As he and Mc. Cain were allies, the promotion was likely to increase Mr. Cummings’ power in Number 10. There has now been speculation that Mr. Cummings is considering his own position. If he does end up resigning too, Johnson will have lost two of his key allies in one fell swoop.

We’ll have to keep an eye on the story to see what ends up happening – but we will be discussing this situation and Cummings specifically in an episode of the Politics Unpacked podcast coming soon, so make sure you’re subscribed if you’re interested in that (YouTube, Apple Podcasts, Spotify)

In the final story today, we head over to the US to cover the next chapter in the seemingly unending book that is the 2020 US presidential election. While the global media is reporting that president-elect Joe Biden did, in fact, win the election – some (including the president) are contesting this victory, owing to widespread electoral fraud. There is, as yet, no evidence of such claims.

However, the president is continuing to push the narrative that he won – and has even gone as far as blocking the president-elect from accessing messages of congratulations from foreign leaders that have been sent to the State Department.

Usually, foreign leaders will contact the president-elect through the state department – as it is an official communication channel. This will give them access to resources, such as translators, that help in official dialogue between officials. However, due to the Trump administration blocking the president-elect, Biden has been receiving calls from foreign leaders independently of the State Department – despite this being less than preferable due to the lack of logistical support.

It has even been reported by CNN that foreign officials are reaching out to Obama-era diplomats about how to get their message of congratulations to the president-elect.

Whether the Trump administration will accept the result at some point before inauguration day and help to facilitate a smooth transition of power is yet to be seen.