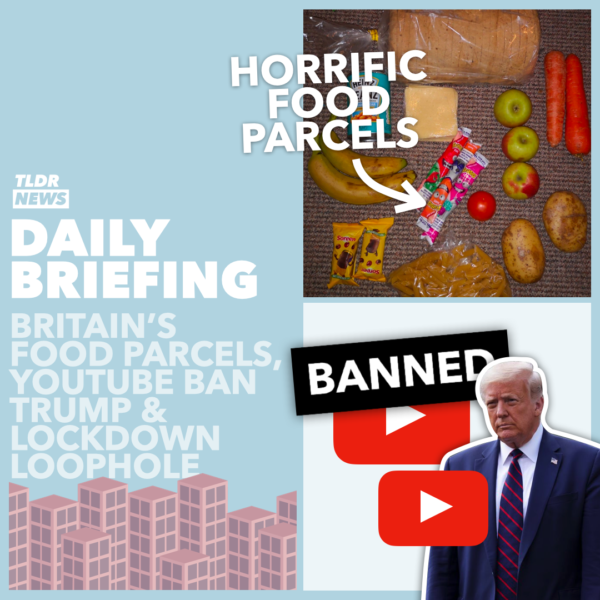 January 13: Food Parcels, Trump on YouTube and a Lockdown Loophole

In the first story of the briefing today, we discuss the outrage over the government’s food parcel program. The UK has a system whereby children who come from low earning economic backgrounds are eligible for free school meals – which is useful when schools are open but not so much when they’re closed – which they currently are for coronavirus.

So, ministers have opted to introduce a ‘food parcel’ system, whereby families receive food to their door as a substitute for the meals that children would receive in school. There was discussion a few months back about giving parents vouchers to allow them to choose their own food – but this was turned down.

The controversy today comes with the actual contents of the parcels. One woman complained on social media as the parcel was meant to last for 10 school days, and as such should be worth about £30. In it, there was a loaf of bread, two carrots, three apples, two potatoes, a tomato, three small yoghurts, a small bag of penne, two soreen bars, two bananas and a tin of baked beans. It is suggested that, in total, this has a value of around £5.22 – which begs the question, where has the other £24.78 gone?

The company, Chartwells, claims that it was actually supposed to last a week and cost them £10.50 for food packaging and distribution. They did accept, though, that more needed to be done.

This was only one example of inadequacies in the food parcel system. Many more examples were posted to social media, and many high-profile figures voiced their disgust at the system. This included the Leader of the Opposition Sir. Keir Starmer and footballer Marcus Rashford.

Following the uproar the government has today told the distributor to reimburse the parents, and the Education Secretary has confirmed that as of next week, schools will be able to, instead, offer vouchers. Hopefully then this shocking situation is set to end and children can begin getting the food they need and deserve.

YouTube has claimed that the videos posted to the channel have broken their rules – specifically because they can be defined as incitement to violence. Some civil rights groups were threatening to withdraw adverts from the site if Trump’s account remained active.

The ban is, at the moment, only for 7 days but may last longer. YouTube has, therefore, joined many other social media companies that have snubbed the President in the days following the Capitol siege – although a seemingly much less permanent ban. So maybe Trump could follow Farage and shift to YouTube.

In the last story today, we go to Canada – somewhere we don’t normally report on – to discuss a rule breaker who thought they had gotten around the lockdown rules. Canada has gone further than the UK with their lockdown rules as they have implemented a curfew. This comes into effect at 8pm and is lifted again at 5am. Anyone found outside between these hours needs a good excuse – such as walking the dog.

In an attempt to circumvent these rules, one woman attached a leash to her husband and walked around the block with him – claiming she was taking her pet for a walk and therefore was complying with the rules. We’re not lawyers here at TLDR News, but even we see that this isn’t the most robust argument and we can see a number of issues with it.

As it turns out, the Canadian police also saw the flaws in the argument, and subsequently fined the couple 1,546 Canadian dollars. This is roughly 893 British pounds or 1,212 US dollars. Considering that this brief walk cost them the equivalent of a top-end 4k TV, a small second hand car or many, many, items in the TLDR Store – we’ve got to ask whether it was worth it. The answer is probably not.