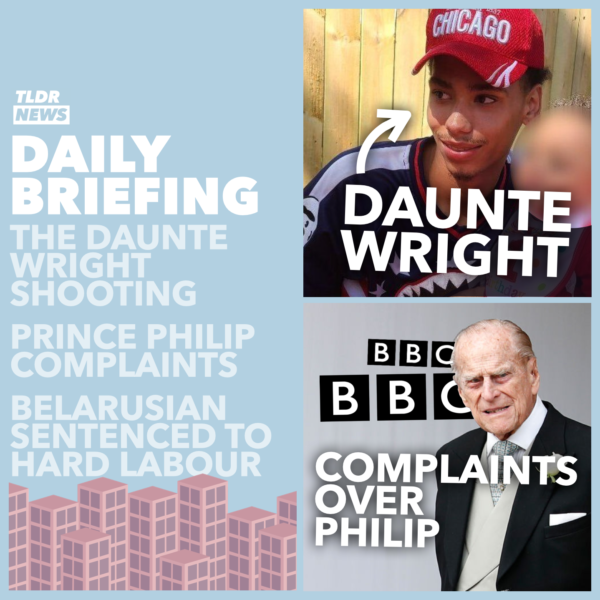 In the first story today, we move to the US to discuss the events surrounding the Daunte Wright shooting in the US. Before we discuss the developments today, it’s important that we explain the full story. On Sunday, Mr. Wright was driving in a suburb of Minneapolis with an expired license plate. The police pulled him over, spotted that in addition to his expired plate, he had something hanging from the rear-view mirror – something that is illegal in the state of Minnesota.

The police then discovered that a “gross misdemeanor warrant” for his arrest had been issued. Mr. Wright was then handcuffed and attempted to get back in his own car. It was at this point that he was shot.

As with the shooting of George Floyd last year, huge protests have taken place, with the American Civil Liberties Union of Minnesota claiming that they have “deep concerns that police here appear to have used dangling air fresheners as an excuse for making a pretextual stop, something police do all too often to target Black people”.

Today, though, the police have claimed that the shooting was an accident. The police chief of the Brooklyn Centre, Tim Gannon, explains why:

Our thoughts are obviously with the friends and family of Mr. Wright.

In the second story of the Daily Briefing today, we move back to the UK to discuss the BBC’s coverage of Prince Philips’ death. As we explained in the last Daily Briefing, Prince Philip died on Friday – which put into action Operation Forth Bridge. In addition to this, the vast amount of preparation from broadcasters for this event was put to good use. Specifically, the BBC cleared Friday’s schedule and filled it with tributes and news coverage. This included scrapping EastEnders and MasterChef.

As the public broadcaster, this likely came as a surprise to no-one. However, there were a lot of people that weren’t happy. It has been claimed that more than 110,000 people have complained to the BBC over their decision to wipe the schedule in favour of tributes and news coverage. If these numbers are true, this would make it the most complained about TV event in history in the UK.

Other channels opted to continue their schedule in spite of the announcement. Specifically, Channel 4 opted to continue forward with their plan to broadcast an episode of Gogglebox in the evening. This was met with criticism also, albeit, likely from a different group of people and for different reasons.

Despite this, though, Gogglebox was the most viewed TV event of Friday night with over 4.2 million people tuning in. This was at the same time as BBC One’s audience dropped by 6%, compared to the previous week. BBC Two suffered an even worse drop off in viewers, with only ⅓ of people watching on Friday night, compared to a usual week.

So, it seems that there was a huge amount of backlash over the extent of the coverage of the death of Prince Philip. What do you think though – was Channel 4 disrespectful for broadcasting Gogglebox or was the BBC’s coverage too extensive?

In the third story today, we move to Belarus to discuss hard labour being used as a punishment for dancing. Okay, so before we actually explain what we mean here, it’s important to understand the background.

President Lukashenko has been at the helm in Belarus since 1994 – around the time the new constitution was adopted. However, many of the elections have been seen as corrupt by international organisations. The Organization for Security and Co-operation in Europe (OSCE) have claimed that due to arbitrary detention of opposition candidates, elections simply are not fair. This bubbled over last year following yet another corrupt election.

President Lukashenko has used the police to repress any protest at his rule – something that has been demonstrated in quite a shocking way in the last few days. Last Year, Igor Bancer (the singer in a punk rock band) was released from prison following a protest at the Lukashenko government and the fraudulent election.

Instead of staying quiet, he decided to protest against the police yet again. When deciding how to make a statement, his friend told him:

It was this comment that inspired him. He decided he would go up to a policeman and do exactly that: show them his ass. Well, Euronews described the act as “grinding on the bonnet of a police car” with his trousers down.

This act led him to be charged and sentenced to one and a half years of hard labour and a penal colony. He is currently out on bail as he awaits a date for an appeal.

What do you think though? Did he take the protest too far? Is the sentence too high?

An App for Walking

In the last story in the Daily Briefing today, we discuss a new app – aimed at helping people walk. Specifically, the app is designed to encourage people to pay attention when they’re using their phone while walking. The features (called ‘Heads Up’) are expected to be included in the Digital Wellbeing App.

Notifications will be sent to the user when they’re walking and using their phone, reminding them to “be careful”, or “look up”. It has been suggested that these messages would be accompanied by a “playful emoji”.

Whether this is useful really comes down to how you use your phone and whether you think such a notification would be useful. For some people, just a simple reminder every now and then would cause them to actually look up and pay more attention to their surroundings.

To others, who believe they are already cautious when using their phone on the move, the feature would just be a nuisance and yet another notification to dismiss whenever it pops up.

Would you use this feature? Would it stop you walking into lamp-posts? Or would you try and disable it as quickly as possible? Let us know in the comments below.