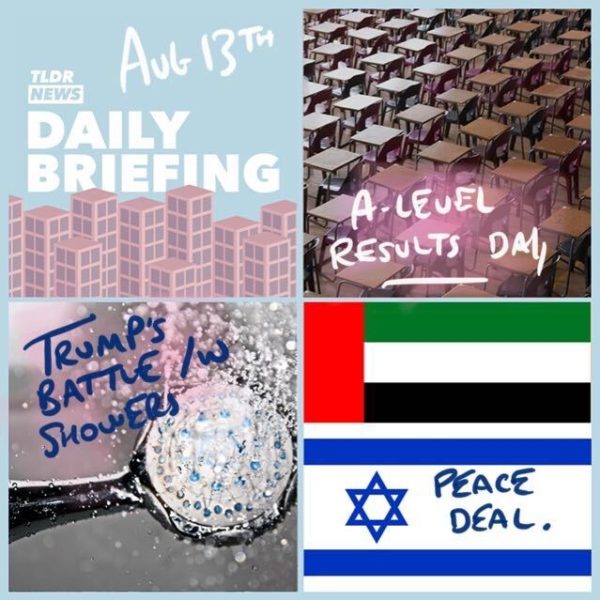 August 13th: US Showerheads, A-Level Grades and a Peace Deal

Today’s first story goes to show that you just don’t know what the hell is going to be in the news from day to day. This is the story that the President of the US Donald Trump has complained about the way in which shower heads work in the US. That’s right – shower heads.

Currently, due to a US law from 1992, a shower head must not produce more than 9.5 litres of water per minute. Following a complaint from the president that “you want to wash your hands, the water doesn’t come out”. He went on to say “my hair – I don’t know about you, but it has to be perfect. Perfect”.

His administration wants to change the rules to make the 9.5 litre cap apply only to each individual nozzle on the showerhead, as opposed to the showerhead as a whole – as the law currently states.

Some groups have opposed this proposed change – citing environmental reasons. The change could mean 4-6 times more water being used per minute per shower head, according to Andrew deLaski – the executive director of the Appliance Standards Awareness Project.

In UK news today, A-Level Grades have been published. This is in the days following the infamous U-turn of the Scottish Education Secretary, who was forced to reverse the 125,000 people who had their predicted grades lowered.

England has used a system where teachers make predictions for students, which will then be moderated by the exam board. While a “triple lock” has been introduced, which means that students cannot get lower than the grade given to them following moderation, it has been shown today that 36% of pupils have had their grades lowered from the estimate their teachers made. In addition to this, 3% of pupils have had their grades lowered by at least 2 grades.

One journalist has even shown that her daughter, who did consistently well at A-Level, was predicted three As. In her mock exams, and other tests during sixth form, she received A*s. However, following moderation she was given two Bs and a C. This is a drop of two grades, for the C grade and a drop of one grade for the B grade.

The same journalist has pointed out that government ministers were still tweaking the system as recently as yesterday.

There is, understandably, a lot of frustration among sixth formers right now. Not only because so many have lost out on grades they feel they deserve, but also because the government has been making changes to the system so close to the deadline.

It is important to note that there has, however, been a record number of As and A*s this year.

If you have received your A-Levels today, everyone here at TLDR wishes you all the best – and we hope that you haven’t been negatively impacted by the grade predicting system.

In breaking news today, Israel and the United Arab Emirates (UAE) have announced a ground-breaking peace deal. This has been announced by US President Donald Trump.

Due to concerns between both Israel and the UAE over Iran’s “regional influence”, the two have decided to sign the peace deal. This means that Israel will suspend it’s plans to annex parts of the West Bank.

As this story is just breaking, we only have a limited amount of information on it.