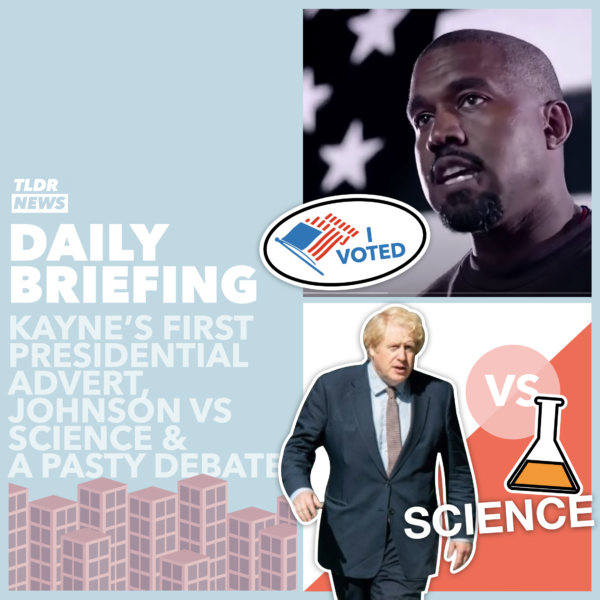 In the first story today, Presidential candidate Kanye West has released his first campaign advert. The advert primarily features Mr. West standing in front of a waving black and white US flag, discussing policy ambitions with inspirational orchestral music playing in the background.

Some of the promises made in the video are that a West Presidency would “revive our nation’s commitment to faith” and that “through prayer, faith can be restored”. In fact, faith appears to be the theme throughout the advert – with him claiming that “by turning to faith, we will be the kind of nation, the kind of people, God intends us to be”.

The website that this advert featured on includes policy commitments coupled aside quotes from the Bible. These are featured below the Kanye 2020 merchandise.

Whether Kanye will be able to use such a religious platform to gain on his rivals President Donald Trump and former Vice President Joe Biden in the polls will be seen in the coming weeks.

In UK news today, it has been revealed that scientists on the Scientific Advice Group for Emergencies (or SAGE) told the Prime Minister, on the day before the proposal was introduced, that a 10pm curfew on pubs and restaurants would have a “marginal” effect on the transmission of the virus.

In addition to this, scientists this week have pushed for further proposals to curb the spread of the virus – such as the much anticipated ‘circuit-breaker’ idea that would have seen England go into a two week temporary lockdown.

It is possible, of course, that the 10pm rule was introduced for something along the lines of social compliance and enforceability – something that the scientists don’t consider to be a direct benefit to public health but is an inadvertent benefit.

A Debate About Pasties

The last story today is about a debate about pasties. Yes, you read that right. Following the announcement of the new rules by the Prime Minister yesterday, those in Tier Three areas (currently, only Liverpool) can only purchase alcohol if a “substantial” meal is purchased alongside it.

Let’s hope this is cleared up in the coming days!