Home Daily Briefing November 13: Zuckerberg Defends Bannon, A Rush to the Pub and Obama vs Trump 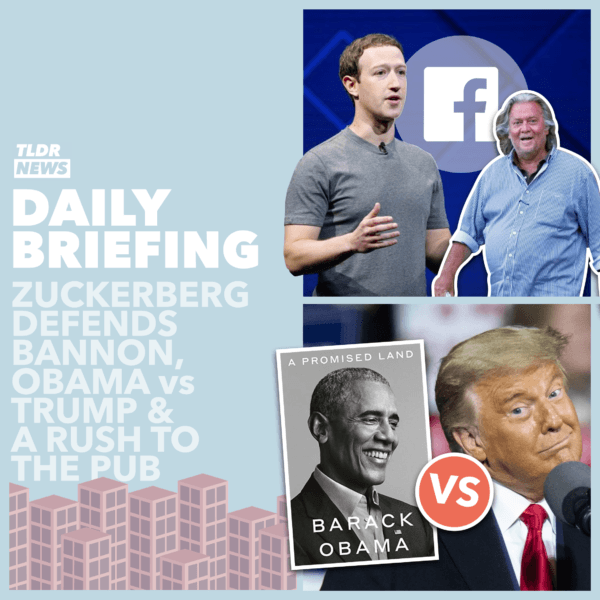 November 13: Zuckerberg Defends Bannon, A Rush to the Pub and Obama vs Trump

In the first story in the Daily Briefing today, we look at some news concerning one very specific Facebook ban. While Steve Bannon may seem like a relic from the early days of the Trump administration – he is still about, putting out content on social media for his fans. In fact, he even has a podcast (called the War Room). Like anyone with a podcast, he uses social media to promote it, including Facebook. Now, for normal podcasts, this wouldn’t be too much of a concern. Abiding by Facebook’s terms of service shouldn’t be too difficult.

However, in one particular episode of the War Room, Steve Bannon calls for the “beheading” of two White House officials, followed by their placement on a spike outside as a “warning”. Twitter banned Bannon’s War Room account for the video. However, Facebook was more hesitant.

While it did remove the video in question, the account stayed active. Zuckerberg told staff in a meeting that “We have specific rules around how many times you need to violate certain policies before we will deactivate your account completely” and that while the account has come close to that line, it has not yet crossed it.

Many conservatives will likely be pleased by this news, after the right has become increasingly upset about the way big tech has been treating them recently – exemplified for some by the way that Trump’s tweets have been fact checked by Twitter. However, it is worth saying that Facebook is far from a left wing propaganda outlet with the top linked facebook posts each week regularly coming from right wing sources.

Whether Bannon will cross the line soon and see his account removed from the site is yet to be seen.

A Rush to the Pub

In the second story today, we move to the UK to discuss the last few days of limited freedom before lockdown 2.0. While many will have heeded the warnings from the government about rising case numbers, some saw the new lockdown date as a deadline to meet their friends, specifically in the pub.

Experts now think that this rush to the pub led to an increase in coronavirus cases. In fact, Paul Hunter (medicine professor at the University of East Anglia) said that “If cases remain this high for another day or so then it will pretty much be down to people having more social contacts – partying before lockdown”. Maybe this evidence shows that a change in attitude by the public is required.

New restrictions are often announced for a future date, meaning that there is a gap between the announcement and the restrictions. People have clearly used this time to their advantage, looking at it as their last chance to have fun. Maybe we need to look at things differently, and see the implementation date of these restrictions more as the time where we can be fined for not following restrictions, and the intermediary period should be a period we all aim to reduce contacts as much as possible (rather than our last chance to have fun).

In the final story today, we head to the US to discuss former president Obama’s assessment of Trump’s election in 2016. While theories of how Trump won in 2016 are plentiful and often multi-faceted, Obama’s assessment is simple: “millions of Americans were spooked by a black man in the White House”.

In his memoir ‘A Promised Land’, Obama goes on to claim that “It was as if my very presence in the White House had triggered a deep-seated panic, a sense that the natural order had been disrupted. Which is exactly what Donald Trump understood when he started pedaling assertions that I had not been born in the United States and was thus an illegitimate president” and that “the dark spirits that had long been lurking on the edges of the modern Republican party – xenophobia, anti-intellectualism, paranoid conspiracy theories, an antipathy toward black and brown folks”.

This is a particularly contentious statement, and one that may cause more divide between the Republicans and Democrats. While the Biden administration is currently trying to reunite the country, specifically through the use of the soundbite “I will be a president for all Americans”, Obama’s comments could undermine this aim, by causing animosity between the two parties. The Democrats could rally behind this claim, and accuse Republicans of being racist. While the Republicans could see these accusations as personal, and rally behind President Trump.

We will soon see how these comments go down with the parties.