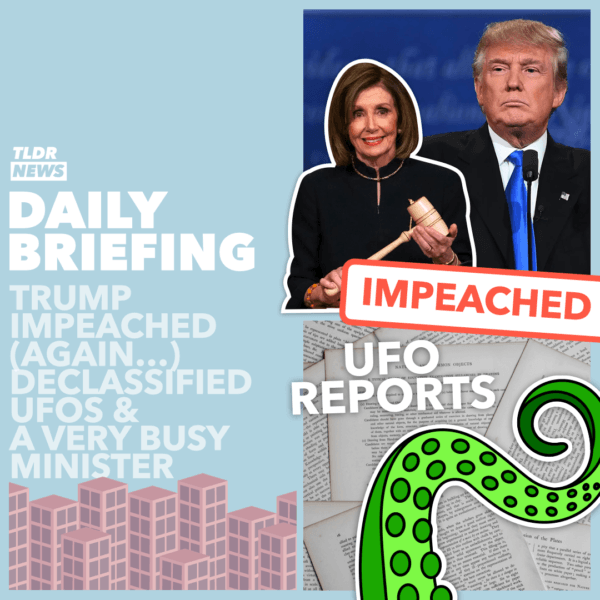 January 14: The Second Impeachment, A Busy Minister and UFOs

It should be noted that usually, votes of impeachment happen along party lines. In effect, this usually means that very few members of the President’s party will vote against them. However, many Republicans are frustrated by the President’s behaviour in relation to the Capitol Siege. Angered by his refusal to outright condemn them when they were inside Congress and his decision to call them “patriots” in the days following, 10 Republican representatives actually voted to impeach the president last night.

In ordinary times, this would be simply unheard of – but, as we’ve seen, we are far from living in normal times at the moment.

The next step in this impeachment process is the Senate trial. Some were hoping for this to happen before the President vacates the White House – however Mitch McConnell has made clear that this would not be the case. Evidently, then, this attempt to remove the President from office before President-Elect Biden is inaugurated is destined to fail. But, a message has clearly been sent: that Mr Trump’s influence in politics is starting to wane.

For the second story today, we move back to the UK to discuss the fishing minister. Okay, so usually this wouldn’t be the biggest story – but we thought this specific one was worth mentioning.

Throughout 2020, speculation was rife that the UK was close to securing a deal with the European Union set to come into effect when the transition period ended. Two of the main areas of contention between the UK and EU were fishing and state aid. The point we’re trying to make is that fishing has been a crucial element of the Brexit negotiations.

So it comes as a surprise to know that on Christmas Eve, when the UK and EU finally managed to come to an agreement on fishing and state aid, the fishing minister herself was not informed. This was revealed during the Lords EU Environment Sub-Committee, when Lord Teverson (the chairman of the committee) asked her:

“Did your jaw drop as well when you saw this agreement that had been delivered in fisheries, when really this is such an iconic subject?”

“No, the agreement came when we were all very busy on Christmas Eve; in my case organising the local nativity trail. We’d been waiting and waiting. It looked like it was coming for probably four days before it actually arrived.”

Some opposition members were taken aback by her comments, noting that maybe she should have taken a bit of time out to ensure that she was keeping up with her departmental responsibilities.

In the last story in the Daily Briefing today, we talk about UFOs. Or, as the US government now calls them “Unidentified Aerial Phenomenon” or, UAPs. We’re discussing this today, because this week the US government has released a wide array of documents related to these types of aircraft for public consumption.

About 2,700 pages have been released in total – which will undoubtedly be of interest to the kind of people who believe in alien sightings. Perhaps in these 2,700 pages there is real tangible evidence of extraterrestrial life. Or, perhaps it’s just a bunch of boring government documents. Anything is possible.

Whoever has taken it upon themselves to determine which of these is the case is in for a rough job though. It has been claimed that the documents are incredibly difficult to read, owing to it’s “outdated” formatting. To those of you who are wading through, we wish you good luck!