Home Daily Briefing Apr 14: Biden Pulling Troops out of Afghanistan, an Island full of Vaccines, a Twitch Record and a Banned Facebook Page 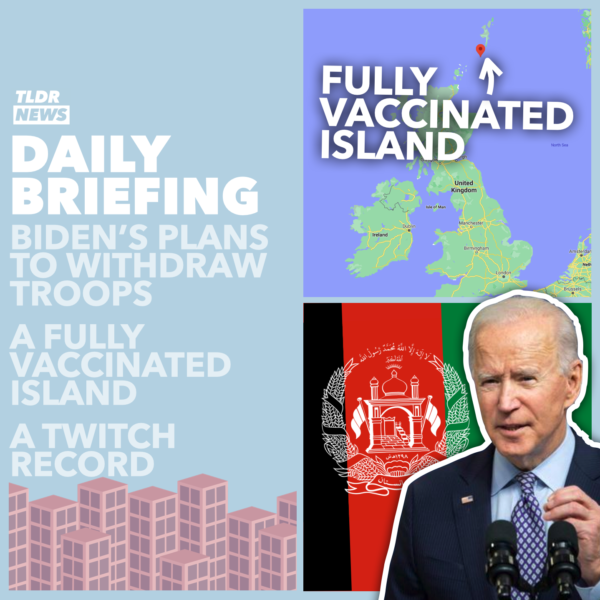 Apr 14: Biden Pulling Troops out of Afghanistan, an Island full of Vaccines, a Twitch Record and a Banned Facebook Page

Biden Pulling Troops out of Afghanistan

In the first story today, we move to the US to discuss President Biden’s plan to pull troops out of Afghanistan. The US has been involved in the Afghanistan War for almost 20 years – following the attack on the twin towers. The US claimed that the Taliban (who controlled much of Afghanistan) were harbouring Osama Bin Laden – and even that they allowed him to run training camps.

The Taliban, though, still operates in Afghanistan today. Last year, President Trump signed a treaty with the Taliban (known as the Doda Agreement). The agreement stipulated that, for the US and NATO to withdraw troops within 14 months of it being signed, the Taliban must disallow Al-Qaeda from operating in their territory – and peace talks must resume with the Afghanistan government.

The 14 month deadline (the 1st May 2021) is swiftly approaching, though, and questions have been asked recently whether the US would even be able to remove their troops in time. It now seems that the US won’t meet this deadline – and President Biden is expected to announce today that the deadline for removing the 2,500 remaining troops will be pushed back to the 11th September – the 20th anniversary of the attack on the Twin Towers.

“Precipitously withdrawing US forces from Afghanistan is a grave mistake. It is retreat in the face of an enemy that has not yet been vanquished and abdication of American leadership.”

However, an official in Biden administration defended the move, claiming:

“The president has judged that a conditions-based approach, which has been the approach of the past two decades, is a recipe for staying in Afghanistan forever”

But what do you think? Is it about time for the US to withdraw from Afghanistan, or should troops remain in Afghanistan?

An Island Full of Vaccines

In the second story of the Daily Briefing today, we move back to the UK to discuss vaccinations. Okay, well, sort of. Around 50% of people in the UK have received at least one dose of a coronavirus vaccine. However, one place in the UK has a 100% vaccination rate: the Fair Isle.

The Fair Isle is a small island, located between Orkney and Shetland – and is most well known for knitwear and birds. They only got a reliable, 24-hour, electricity network in 2018 – which was probably welcomed news for the 48 residents who live there.

The actual logistics of vaccinating these 48 people were quite tricky, though. Due to its small size and population – only small planes and boats serve the residents. As such, achieving the remarkably cold temperatures required when storing the Pfizer vaccine was a tall ask. So, instead, the AstraZeneca vaccine (which does not have to be stored at such low temperatures) was transported in a cool box in a small plane.

This week, all residents have been offered (and given) their second dose of the vaccine – meaning the island is completely vaccinated. Unfortunately, though, they are still bound by the coronavirus rules of the mainland.

So, although they are fully vaccinated, they are still waiting on the rules to be relaxed and for their lives to go back to some notion of normality. Let’s just hope that the vaccination program can offer us a route out of this pandemic soon.

In the third story today, we discuss the breaking of a record online. The record we’re going to discuss revolves around the popular streaming site Twitch. For those of you who don’t know, Twitch is an online streaming website, that allows content creators to broadcast live. It is specifically designed for gamers. Unlike YouTube, the focus is on live content.

While the content is live, streamers tend to start a broadcast sporadically, or on a timetable. It’s not similar to live TV channels as creators don’t stream themselves indefinitely. Well, not usually at least. This is because, this week, Ludwig Ahgren broke the record for the most number of paying subscribers on a livestream. As he had promised that each paying subscriber would extend the stream by 10 seconds, the stream ended up lasting more than 31 day!.

During the stream, viewers watched him eat, sleep, and game. For 31 days, he had absolutely no privacy, knowing that people online were watching his every move, live as it happened.

The previous record for the number of paid subscribers was 269,154 – a record set by Ninja. This week though Ludwig reached the feat of 282,847, and the number is still going up.

Originally, he thought the live stream would last between 24 and 48 hours. But, as he pointed out on Twitter:

Ninja himself seemed quite gracious as his record was beaten. He tweeted:

Records are meant to be broken, I would be lying if I said wasn’t a little sad but congrats @LudwigAhgren on holding the new sub record on twitch 🤩

All we have to say is congratulations to Ludwig – it truly is a huge feat!

In the last story in the Daily Briefing today, we discuss a banned Facebook page. Well, technically it’s not banned anymore. Let us explain.

Residents of Bitche in the Moselle in France decided it would be a good idea to start a local Facebook page – as many towns and villages do. If it’s anything like my home one, then it will be full of complaints about takeaways, litter and people who fail to pick up after their dog.

Well, unfortunately for these residents, ever since the 19th March, no one was publicly shamed for failing to pick up after their dog – as the whole page was taken down by Facebook. Can you figure out why? No prizes for guessing – it was because the Facebook algorithm determined that the page broke its rules about using ‘offensive language’.

The page has only been restored this week. The mayor of the town said the following, of the incident:

“The name of our town seems to suffer from a bad interpretation … the most astonishing thing is that Facebook took so long to correct this. The president/director general of Facebook France has just contacted me personally to tell me the Ville de Bitche page is published again and to apologise for the inconvenience caused.”

Let’s hope that this time, it manages to stay up!