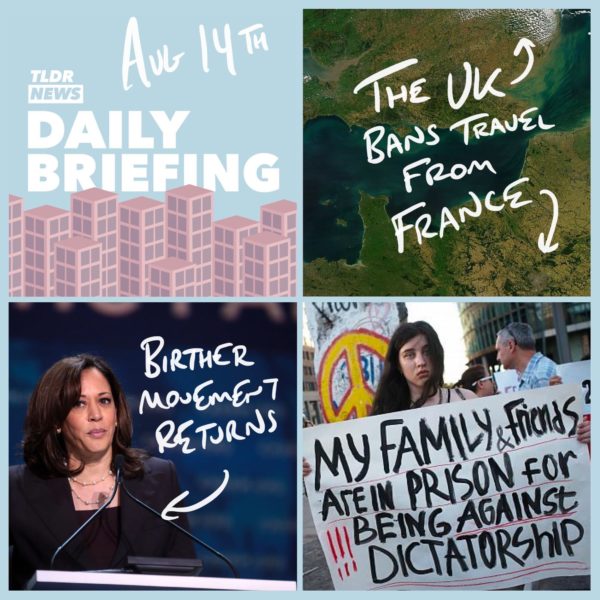 Today’s first story is about yet another country being added to the ‘red list’ of countries that require a 14 day quarantine upon return to the UK. The interesting point to note about the French quarantine, that was announced yesterday, is that the 14 day isolation rule comes into force at 04:00 am on Saturday. Anyone returning from France prior to this will not be legally required to self-isolate for 14 days.

This has inevitably led to a surge in those trying to return to the UK before the quarantine rule is in place. Extra ferries have been planned in order to deal with increased demand, the Eurotunnel trains are booked up and those travelling by air have seen a huge increase in price of flights.

According to Transport Secretary Grant Shapps, there are currently 160,000 British holidaymakers in France.

The French have responded by claiming that they will make “reciprocal measures” and that the decision is a matter of “regret”.

The other areas that have been added to this so-called ‘red list’ are the Netherlands, Monaco, Malta, Turks and Caicos, and Aruba.

We will keep you updated with which countries are being added to this list as they are announced.

In global news today, it has been shown that protesters in Belarus have been tortured while imprisoned for demonstrating against President Lukashenko’s reelection.

One man claimed, while talking to the BBC that: “They beat people ferociously, with impunity, and they arrest anyone. We were forced to stand in the yard all night. We could hear women being beaten. I don’t understand such cruelty”.

Amnesty has claimed that this amounts to widespread torture. Some accounts even claim that this is happening to teenagers.

The EU has suggested that some sanctions could be imposed on Belarus in light of these accusations. Any such action, though, has yet to be announced.

In US news today, President Trump has claimed that Joe Biden’s Vice Presidential candidate, Kamala Harris, may not be allowed to run. This is because, Trump has claimed he has “heard” that Ms. Harris doesn’t qualify due to her not being born in the US.

However, Kamala Harris was born in the US to a Jamaican father and an Indian mother. She fulfils all the requirements to run for president, which means she is also able to run for vice president.

Professor Eastman (of Chapman University) claims that she may be ineligible to run, if her parents were on student visas in the US when she was born. He cites the 14th amendment. This was written as an opinion piece on the Newsweek website.

However, others (such as Berkeley Law School Dean Erwin Chemerinsky) disagree, claiming that any suggestion that Kamala Harris is ineligible to run is “truly silly”.

The Biden campaign has hit back, comparing President Trump’s claims to the Obama birther movement that Trump started many years ago – using the word ‘racist’ to describe the accusation.

It is yet to be seen whether Trump pursues this claim as rigorously as he did with the Obama birther movement or whether this was just a one-off statement. We will keep you updated as this story progresses.